Agriculture and the “fiscal cliff”: Part 1 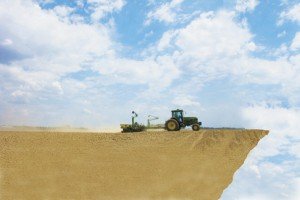 In what may be the single most significant factor affecting the very near future of the U.S. economy, the oft-referred to “fiscal cliff” is looming on the horizon. We asked some experts in the field of agricultural economics to provide their take on how agriculture, in particular, could be influenced. We will be sharing their responses in a three part series. Here is the first response from Carl Zulauf, a widely respected agricultural economics professor at Ohio State University:

The U.S. fiscal cliff refers to the combination of two events that will occur in late 2012 and early 2013: (1) implementation of federal budget cuts resulting from the compromise to extend the U.S. federal debt ceiling and (2) expiration of many of the tax cuts enacted since 2000. The name, “fiscal cliff,” stems from the widely held concern that these two actions may cause an economic recession. However, the fiscal cliff is actually a symptom, not the problem.

The U.S. has been using fiscal spending and tax policy to stimulate the U.S. economy. This stimulus, in particular the second set of so-called Bush tax cuts, pre-dates the financial crisis of 2007, but the stimulus expanded substantially with the Economic Stimulus Bill of 2008. Between 2007 and 2012, federal spending increased from $2.7 trillion to $3.5 trillion. In contrast, federal tax receipts actually decreased from $2.6 trillion to $2.4 trillion. A key reason for stagnate tax revenue is that, since 2007, deflated U.S. gross domestic economic product increased only 3%, from $13.2 trillion to $13.6 trillion. The poor economic growth reflects many factors, but a key one is the lack of international competitiveness of many U.S. industries. As a result, U.S. jobs and wage rates have been under pressure. Thus, the underlying problem is the use of a broad range of government fiscal policy to stimulate an economy that lacks international competitiveness in many industries.

An immediate implication for agriculture is that, similar to the 1991 Farm Bill, the 2012 Farm Bill is intertwined with a national debate over budget priorities and the federal debt. The U.S. House, in particular Republican House members, will have to decide the size of cuts they want from nutrition

programs and the farm safety net. These cuts must then be negotiated with the U.S. Senate.

Most experts believe that solving the longer-term federal debt problem will require both spending cuts and tax increases. In such a grand bargain, both tax breaks used by farmers, such as expensing and accelerated depreciation, as well as spending on crop insurance may be curtailed.

While speculative, resolution of the U.S. competitiveness problem could rest upon reducing energy costs, in particular from developing the large U.S. (and world) reserves of shale gas and oil. Lower gas and oil prices will benefit farms on the input side but likely dampen demand for biofuels. Animal producers will generally benefit while the impact on crop producers will depend on the relative rates of decline in input and output prices. A softening, maybe end, of this period of farm prosperity could potentially result.

Last, while the exact amount is not known, there is a limit to how much public debt the U.S. can accumulate. If the U.S. exceeds this limit, U.S. interest rates will increase, the U.S. dollar will depreciate, and large cuts in U.S. government spending will be required. This is not a situation in which U.S. agriculture is likely to flourish. However, the U.S. has time to avoid these outcomes. Let’s hope it finds the will to do so.