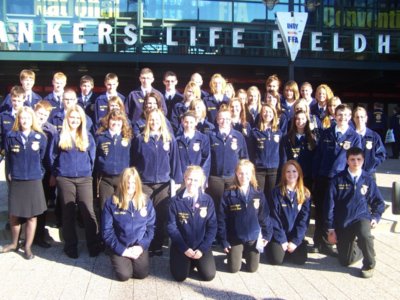 On October 24-25, 2012 members of the Benjamin Logan FFA Chapter recently attended the National Convention in Indianapolis, Indiana. Once in Greenville, Ohio members visited the Anderson’s Ethanol Plant where they toured and saw how a plant worked. As enjoyment, members went to the Incredible Pizza Place and a Band Perry Concert. This was a great way to mingle and have a good time.

The Benjamin Logan FFA Chapter recently had three FFA members recognized at the National Convention. Congratulations to Heather Bleiniger, Cierra Jordan, Kelsey Lininger, Stephen Miller, and Libby Zoldak. They were awarded with the highest degree possible which was their American Degree.