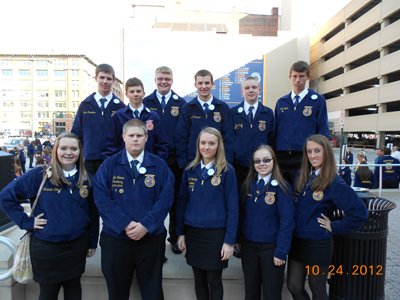 Awards for the honorary American FFA Degree, national chapter award and models of innovation were among many honors and presentations given on the main stage of the convention. The members also gathered information and participated in the national FFA career show, which featured over 2,400 exhibitors, colleges and universities.

Members also attended a concert featuring Brantley Gilbert and The Band Perry, a hypnotist session with Dr. Jim Wand and the Three Hills World’s Toughest rodeo, held at the Pepsi Coliseum. The rodeo event was the last and final event at the Pepsi Coliseum before it will be completely renovated and opened in time for the 2014 Indiana State Fair.

Members also attended a workshop featuring Southeastern’s Scott Hannah and former FFA officer Tyler Gregory called “No Bull Your Way to L.A.” Scott and Tyler discussed their experiences and success in their No Bull challenge and provided pointers, tips and examples to FFA members interested in participating in this year’s No Bull challenge.

The members who attended the convention gained valuable experience in leadership and communication, time management and goal setting. Members took several opportunities to network and meet with FFA students from all over the nation and share ideas and experiences.

The members also visited the Indianapolis Motor Speedway, featuring a track tour and a display of over 100 years of racing history at the famous track.