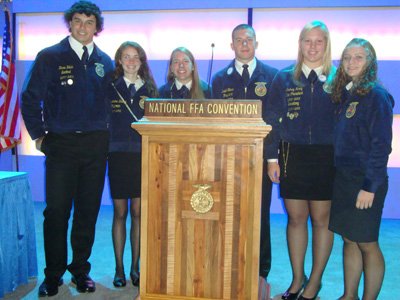 Wednesday, October 24, a group of Zane Trace FFA members traveled to Indianapolis to attend the 85th National FFA Convention. This convention is an annual trip for the most involved members of Zane Trace FFA, and used as  a great opportunity to grow as leaders, learn more about their future, explore Indianapolis, and get to know FFA Members from around the country.

The Zane Trace Members started of their trip with a visit to the Hoosier Gym in Knightstown, Indiana, where they learned many fun facts about the movie Hoosiers, and were able to shoot baskets in the original gym from the movie. From there, they traveled to Traders Point Creamery. There, they looked around the milking area and learned about the natural products that Traders Point has to offer. The members ended their day by attending The Band Perry and Brantley Gilbert concert in Lucas Oil Stadium.

Thursday morning was when the convention activities kicked off, and the members attended opening session of the convention, held in the Bankers Life Field House. During opening session, members heard from National FFA Officers about the importance of using agriculture to put an end to world hunger and sustain the growing population. They also learned of the importance of a positive attitude from Olympic Gold Medalist Scott Hamilton. Scott has battled many life threatening diseases including prostate cancer and a brain tumor, yet he swears a positive attitude is what got him through it all.

Thursday afternoon the members headed to the expo center and spent some time touring the Nation FFA Career show. Every year, the career show proves to be a great resource for members. They learn about many career opportunities within the agricultural field, visit with colleges, and learn about the difference in agriculture from state to state. After the career show, the members put on their buckeye gear to get ready for a night of fun! They attended a hypnotist show and the annual Buckeye Bash, where they danced the night away with other FFA member from all around Ohio.

Friday morning, Zane Trace FFA wrapped up their time in Indianapolis with another visit to the Career show. All members in attendance reported that this year’s National FFA Convention was one of the best yet, and they are excited to implement their new knowledge of the agricultural field. This year’s convention theme was “Grow,” and grow is exactly what Zane Trace FFA plans to do.