With the last seconds ticking off the clock in overtime, the best player squares up behind the three-point line for the win, he shoots — nothing but net. Victory!

Sometimes, everything comes together for a buzzer-beater victory in crop fields, but that kind of success doesn’t happen by chance, which makes success in corn production similar in many ways to success on a basketball court, according to Fred Below, a professor of crop physiology at the University of Illinois.

“You have to plan for high yields. We put together a management system that consisted of five individual factors that we 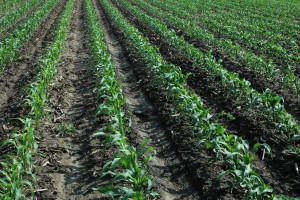 know are important for yield and we put them together in in a systems package,” Below said at a recent BASF meeting in northwest Ohio. “Since there were five, we made the analogy to a basketball team where we have five pro players that represent the enhanced management system against five high school players which represent the grower’s current standard.”

In his 2009-2010 omission plot trials, Below looked at phosphorus fertility, nitrogen, genetics, population, and fungicide.

Below’s standard package was designed to mimic traditional practices, with fertility based on adequate soil test levels, and nitrogen applied pre-plant as 180-pound nitrogen per acre urea ammonium nitrate (UAN; 28-0-0). The hybrid that used (DKC61-22 RR2) was a refuge hybrid with only a glyphosate tolerance trait. This hybrid was grown at a final stand of 32,000 plants per acre and did not receive a strobilurin fungicide application at VT/R1.

Below’s enhanced management system included 100 pounds of P2O5 as Mosaic’s MicroEssentials SZ (12-40-0-10S-1ZN) that was spring broadcast ahead of planting. An extra 100 pounds per acre of sidedress N was applied at V5/V6 in addition to a base rate of UAN (180 pounds of nitrogen per acre). This extra sidedress nitrogen was supplied as Agrotain’s SuperU. The hybrid possessed resistance to corn rootworm as well as European corn borer (DKC61-19 VT3) and was grown at a final stand of 45,000 plants per acre. The high tech plots also received an application of pyraclostrobin (Headline) at VT/R1.

In either system, as in a basketball game, a coach has to manage the team in a manner that they can handle the uncertainties.

“The factor that has the biggest impact on crop yields is the one that growers have the least control over and that’s the weather,” Below said. “You have to manage what the weather gives you. In good weather years, with high management factors we could increase yields by 50 bushels. If you look at this like basketball, which of the five players are the most important? That is a very difficult question to answer.”

The omission plot research helped shed light on some of these answers.

“We developed a design that allows us to replace one of the standard factors into the high tech system,” Below said. “The analogy is that we put a high school player on the pro team and see how badly that player drags down the other pro players. Or, we take the pro player and put him on the high school team to see how much one player can help the team. That makes a really nice visual demonstration that shows it is a team approach to high yield. You don’t necessarily know which player is going to be the best because you don’t know what the weather is going to do.”

Ultimately, the omission plots showed the value of the higher level of management — the pro basketball team. Yields were 193 and 245 bushels/acre for the standard practice and high tech package, respectively. Biotech insect protection (yield increase) and higher population (yield decrease) were the only factors that significantly impacted yield under the standard practice approach, Below said. All of the factors contributed significantly to the overall yield of the high tech package.