In terms of livestock, manure is the most generally considered factor with regard to water quality, but handling and treating farm wastewater is also becoming increasingly important. This holds true for livestock farms and processing facilities.

Whitewater Processing Co. slaughters and processes 6,000 to 8,000 turkeys on a normal day, producing about 2.5 to 3 million pounds of turkey in an average month at their southwestern Ohio facility. The Kopp family has run the business since the 1930s, and with 110 employees, wanted to stay put. But in the 1990s, environmental concerns about the 145,000 gallons of wastewater it produces each day nearly sunk the business.

With a first-of-its-kind treatment system designed by an Ohio State University researcher, though, the situation has improved. And though the costs have been considerable — about $1 million to build the wastewater treatment system plus an estimated $1.8 million to operate and maintain it over the next 20 years — the Kopp family figures the business will save at least $10 million over the next-best alternative.

In the late 1990s, Whitewater began working with Karen Mancl, an environmental scientist and Ohio State University Extension water quality specialist, after the Ohio Environmental Protection Agency grew concerned about the company’s open-lagoon wastewater treatment system, especially with the Whitewater River so close to the facility.

“It’s a beautiful river, and we definitely wanted to make sure it’s protected,” said Mancl, who is also a professor in Ohio State’s College of Food, Agricultural, and Environmental Sciences and a scientist with the college’s research arm, the Ohio Agricultural Research and Development Center.

When the Kopps were looking for options, Mancl had just finished a study on using a sand bioreactor system to treat wastewater from a cheese-making plant. Though that company didn’t follow through with the system, Mancl’s studies showed bioreactors provide an effective way to treat high-fat, high-organic-matter wastewater at a relatively low cost.

Whitewater’s options were limited. The EPA first suggested it hook up to Harrison’s municipal wastewater treatment plant. But the company would still need to pretreat its water to remove pollutants that the municipal system wasn’t designed to handle, and it would still have to pay a premium to the facility.

The total cost for the construction of the pretreatment facility, hook-up and use of the Harrison treatment plant over 20 years was estimated at $12.5 million.

“And it likely would have been even more,” Kopp said. “They had given us some estimates for future increases in treatment costs when we first looked at that option, and so far the actual increases have been more than they projected.”

In 2001, Whitewater began funding research in Mancl’s lab to determine if bioreactors would work for the type of wastewater its facility generated. That funding continued year after year as Mancl, graduate students and post-doctoral researchers ran test after test in the lab. 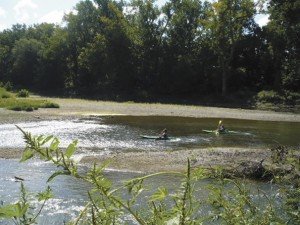 “With all of Karen’s work, we knew the system would work great,” Kopp said. “It was just a matter of scaling up to what we needed for commercial use.”

A bioreactor system works like this: first, the wastewater is screened to remove as much of the suspended solids as possible before it is flowed through beds of sand and gravel. Microbes quickly populate the surface of the sand grains and gravel pieces, and they feast on the organic matter, breaking it down and removing it from the water. Treated water runs clear.

In fact, before treatment, the effluent at Whitewater is measured at over 800 BOD (biological oxygen demand), the standard that regulators use to measure water pollution. Normal sewage has a BOD of about 200.

When Whitewater’s wastewater is tested after treatment, its BOD is less than five, and it can be released directly into the Whitewater River, with the Ohio EPA’s blessing.

“The EPA has been very helpful through this whole process,” Kopp said. “Very patient.”

“If you visit, it looks sort of like a park,” Mancl said. “All you see are 12 large rectangles of gravel, and grass is all around them.

“Under the gravel are the pipes that carry the wastewater and spray it, underground, onto the sand. It’s quiet, there’s no odor, and even though most wastewater treatment plants aren’t necessarily something you want to look at, it’s not ugly. They plan to plant trees to make it even more attractive.”

One of the challenges with the system is that operators must be sure the bioreactor doesn’t get overwhelmed and become clogged, she said.

“If the sand was to get clogged, the research we conducted here at Ohio State shows you need to turn that filter off and let it rest, and send the wastewater to another cell,” Mancl said. “Then the microbes consume the wastes that have clogged the filter and unclog it. That takes about four months.”

Mancl knows this because her lab tested it.

“Then we let it rest, and after four months, it worked just like a brand new filter. You just have to let the microbes work to consume the extra organic matter that clogged the sand.”

The amount of wastewater generated at Whitewater requires the use of eight bioreactor cells at a time. Whitewater is building 12 cells to have the backups needed to let filters rest; eight cells are currently online and in operation.

Another concern with wastewater is the amount of ammonia it contains.

“There’s a different group of microbes that consume ammonia, and they grow more slowly,” Mancl said. “We’re working with Whitewater to track that now as the new system is starting up.

“It’s definitely improving, but for now they’re using a backup chemical ammonia-removal system that takes the ammonia down to practically nothing. And, the system also has some standby lagoons, so if for some reason they’re not able to discharge into the stream, they can hold the water in a lagoon.”

Yet another concern regarding wastewater is its level of nutrients, such as phosphorus and nitrogen. Although currently there are no limits on nutrients in treated wastewater, such regulations are definitely on the horizon, Mancl said.

“We’re not just waiting to see what will happen, we’re trying to get out ahead,” she said.

In research funded by the Ohio Water Development Authority, one of Mancl’s graduate students is using Whitewater’s treated wastewater to irrigate greenhouse plants, essentially recycling the nutrients to fertilize flowers, grasses and other horticultural products.

If results are positive, Mancl and Kopp can envision a day when greenhouses could be built on top of the bioreactors or on another nearby three acres.

Another challenge is the maintenance of the pipes, pumps, controls and valves that distribute the wastewater.

“Distributing wastewater over such a large area in a simple way really hasn’t been done before,” Mancl said. “The technology and the types of valves we’re using we’re using are new. It’s a new approach.”

Both Kopp and Mancl believe such a system could work well at other food-related processing facilities.

“But I think we were the perfect place to build the first one,” Kopp said. “There’s a gravel pit that sits right behind the facility.

“The land we’re using was previously a junkyard that we just had to clean up. Everything was right here. If you’re farther away from gravel or in a setting without acreage, it would be more of a challenge.”

Sand bioreactor size was a big question and Mancl’s research helped Ohio EPA understand how big the system needed to be. Since most wastewater treatment systems need full redundancy to provide reserve capacity in case of short-term large flows or mechanical problems, EPA initially told Whitewater it needed to build 16 bioreactor cells instead of the 12 they had planned.

However, Mancl held an OSU Extension workshop on the sand bioreactor system for EPA engineers that presented all of the research on this new technology. The information gave the regulators the assurance that this different type of system provided the safeguards necessary to protect Ohio’s environment.

“That’s the kind of savings that university research can provide,” Mancl said.

Anyone interested in learning more and getting a closeup look at Whitewater’s facility can sign up for a Cincinnati-area conference Mancl is organizing on April 11-12, 2013.

“Low-cost Treatment of Meat Processing Wastewater” is the topic of her annual 2013 Water Quality and Waste Management Conference. Registration is $200 before April 1. Details and online registration are available at http://setll.osu.edu/programs/owqwm_conf.html.