Changing your farm in a changing climate

The climate is changing. Are farms changing with it? 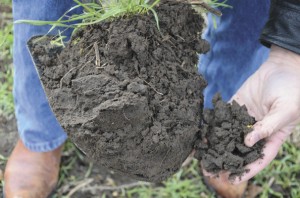 “Climate changes all the time and I am not sure that it is something that we need to get too excited about, but we do have to adapt to it,” said Jim Hoorman, with Ohio State University Extension in Putnam County. “We are seeing increased heavy downpours, rising temperatures, and longer growing seasons. In a couple of years we could be seeing temperatures that we’d used to expect in Kentucky.”

Ultimately, the changes could have some clear benefits to Ohio agriculture.

“Corn is a C4 plant that produces a four-carbon compound, so we do not expect to see major yield changes with increased carbon dioxide levels. Soybeans are C3 plants, though, and we can expect to see more yield there.”

So, how can Ohio crop production, with today’s technology, adjust accordingly?

“With longer growing seasons we can plant earlier, plant longer hybrids and harvest later,” Hoorman said. “For wetter springs, you can get larger equipment to plant in a smaller window or use cover crops and controlled traffic to dry soils out through evapotranspiration and firmer soils. You also may want to start looking at smaller equipment, with the use of robots to run that equipment 24 hours a day, that would result in less soil compaction.”

The use of no-till in combination with cover crops (which happens to be Hoorman’s area of expertise) can also play an increasingly important role in a warmer climate with more extreme heat waves and droughts.

Longer growing seasons can also facilitate the incorporation of cover crops into a rotation when planting mid-range maturity crops. In addition, cover crops can play an important role in managing nutrients in large rainfall events. Tile installation and irrigation may play an even more important role in the future as well.

“We’re seeing a lot more tile put in a lot closer together to manage water, but there is a problem, then, with holding water in the soil. We need more carbon in the soil to help hold that water,” Hoorman said. “As you increase soil organic matter, you increase water holding capacity. The best way to keep nutrients in the soil is to keep something in that soil growing year round.”

Other climate change considerations could include the benefit of more growing degree units versus the challenge of potentially higher nighttime temperatures, more double cropping opportunities with longer growing seasons, maximizing yields in times of high crop prices, and relying even more heavily on sound agronomics to buffer against challenging conditions.

“Extreme weather may also change weeds, insects, disease and microbe challenges. We will probably see increases in algal blooms on Lake Erie and that will have a big effect on Ohio agriculture,” Hoorman said. “We think the best way to adapt to these changes is with no-till and cover crops.”