Is the Tribine the future of harvesting crops?

By: Heather Hetterick and Matt Reese

The world is just starting to take notice of a game-changing concept in harvest technology that has been the subject of countless hours of farm shop figuring by Ben Dillon from Indiana — the Tribine.

The Tribine is a combine and grain cart in one articulated unit that offers the first fundamentally new harvester architecture to come out since self-propelled combines became available in the 1940s. Dillon’s modified AGCO Combine moves the grain tank from the top of the machine to the rear, allowing for a much larger hopper to be included.

“Our focus has been on handling the cleaned grain, not on threshing. I’ve been working on this for a long time. You might say I am a slow learner. I started working on this sort of thing in 1997 and the Tribine is the fourth generation of prototype that we’ve built,” Dillon said. “For the very first one, we took a Kinze hydraulically powered grain cart and hooked it on the back of a combine that we already owned. We soon learned that we had to make that cart both powered and steerable, which we did. That is one of the first patents that we were awarded on harvesting technology. We have been working on this for a long time. The Tribine is really an evolution and the combination of everything we’ve learned over the last 12 years.”

In total, there are 28 patents on the Tribine that offers a number of practical advantages in the field. The machine boasts a 1,000-bushel grain tank with a two-minute unload time and electronic unload assist. It’s also full time four-wheel drive and considered a Class 8 combine.

“We believe that two minutes is the magic number that tries the patience of the operator and, with the Tribine, you can load a semi in two minutes. It unloads at 500 bushels a minute through a 22-inch unloading auger,” Dillon said. “The philosophy is that you always unload at one end of the field. In good corn, with a 12-row head, the Tribine can go more than a mile so you can always unload at the same end of the field into a semi or a grain cart. There is a lot of time that that is saved, there is a diesel savings and one person is eliminated from the harvesting operation because you don’t have to use a grain cart. It is also feasible to unload on the go into a grain cart in very large operations.”

There are also benefits in terms of soil compaction, Dillon said.

“Reducing compaction is one of its biggest benefits. It is a symmetrical vehicle and, as it moves across the field, it only leaves two tracks. A random grain cart chasing a combine leaves many, many tracks across the field because it is pulled by a tractor that does not have the same axle spacing,” he said. “The initial studies on compaction that were done at Ohio State indicate that the first axle passing, which in this case is the first on the combine, causes 80% of the compaction. The front axle of the Tribine weighs less than a conventional combine that has a grain tank near the front axle. The Tribine weighs much less than a conventional combine and grain cart. It weighs about the same as a conventional Class 8 combine. When it is loaded it weighs much less than a 200 horsepower tractor and fully loaded grain cart.”

Dillon grew up on a farm in Indiana and went to Purdue University, but has spent quite a bit of time in Ohio.

“I have lived in Ohio for a number of years. I worked at Toledo Scale in Toledo and then we moved to Columbus,” he said. “I was also fortunate to be able to go back to work on the farm and be an active farmer for the last 15 years. I have cash-rented my farm and now I am semi-retired.” Dillon admits that his Tribine still needs to be the subject of much more extensive in-field testing, but feels the concept is successful both conceptually and in the field.

“We barely got the Tribine finished to the point that we could bring it back to Indiana where we had saved some corn to run. It was the middle of December and we barely beat the winter storms by a few hours,” he said. “The testing time has been quite limited and the corn looked kind of funny because it was in mid December. We were able to run corn through the whole process in the Tribine and, to our satisfaction, the concept works. Clearly it needs more time in the field and more testing but we consider the concept to be proven.”

The biggest challenge of the whole process was transforming a successful prototype into a functional machine for the farm.

“It was a challenge making it robust enough so that virtually anyone can get in the cab seat and drive it and, no matter how they treat it, it will survive and be a safe, workable vehicle,” he said. “Now we want to get reaction and feedback from grain farmers because they know best what is required. And, we don’t have the resources to put the Tribine in production, so we are actively looking for a partner for the future.”

The Tribine will be making its world debut at the Ag Connect Expo that runs Jan. 29 to 31 in Kansas City. The potential final commercial cost of the Tribine has not yet been determined, but it does have the potential to fundamentally change the harvesting market.

“We are pretty sure that the Tribine will cost less than a conventional combine and a grain cart, but we really don’t have any final production costs yet,” Dillon said. “In my judgment, the current combine architecture is maxed out. You can’t put a bigger grain tank 14 feet in the air when there is no space. And, you can’t make the rear tires much bigger because, when you turn them, they would hit the combine. Now, someone might come up with another clever idea to prove me wrong, but we believe that the Tribine and an articulated machine is a game changer.”

See more photos and the combine in action in the video’s on the Tribine site. 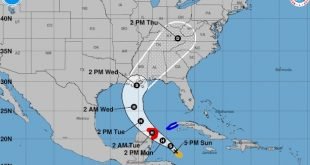