By Heather Hetterick and Matt Reese

Doug Horst got to take his family on a Disney trip away from the dairy farm this year, but chances are that they did not encounter anything much more magical then what they have at home. Doug’s newfound flexibility to travel somewhere other than the milking parlor on his family’s Legend Dairy, Ltd. in Wayne County is a result of the addition of two Lely Astronaut milking robots in September of 2011, which are pretty magical in their own right.

The cost of labor continues to rise and, even with a higher pay grade, finding the right person for the job on a dairy farm is challenging, particularly for small to mid-sized farms. Though they cost around $200,000, robots can make economic sense when looking at the labor savings and increased milk production they offer.

“Three or four years ago we went to the Farm Science Review and saw robotic milkers down there and it sparked an interest. I thought it was an application that would work for us and be a fit. Then we started to think of ways we could make it work,” Doug said. “After that, the biggest thing was to figure out the financing and how we were going to pay for it. That took six months to a year to get it figured out. We made a long range plan of maybe five years to get them, but we worked on it a little bit at a time, and three years in we actually started building.”

The robots, designed to last 15 years, allowed Doug and his father Dean Horst to increase to milking three times daily while decreasing labor. The robots are housed in a re-vamped free stall barn that is now the milking parlor.

“Going to milking three times allowed for better production, less labor and we could compete better with large dairies and still remain a small family farm,” Doug said. “We farm 430 acres. Some of that we use for selling cash crops and the rest we use for raising our forages and we buy some to supplement that. We milk about 120 mature cows and we have probably 110 replacements here on the farm.” 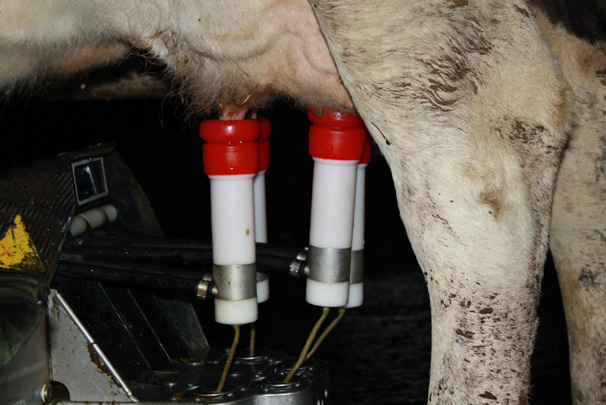 The robots made more efficient use of their resources.

“We stayed about the same size since then. It gives us flexibility with labor, which was a big thing. We basically have my dad and I plus one part time employee,” Doug said. “When you’re raising a family, you need to find time for them and not have to worry about being here twice a day, all the time.

“The flexibility allows us to get by with just one person here. There are definitely some labor savings there. We are not spending as much time in the barn. The other thing we considered was the increase in milk. Now that comes with an increase in feed as well, but an increase in 10 pounds of milk is a substantial increase to revenue. We’re definitely making more milk than we did before.”

There was a learning curve, but understanding the Astronaut is not rocket science, Dean said.

“We always had W.G. Dairy supply our milkers and they took on the dealership for Lely. They provide really good service and Lely as a company has been so helpful. They had webinars to help train us and they still have webinars every two or three months. They have been very helpful,” Dean said.

WG Dairy keeps all components of the system in stock and has service people trained and on call around the clock should an issue arise.

“We had a company come that does startups of robots. They were here for a week to help train us and get us started learning all of the features on the robots,” Dean said. “People are amazed and they come to see it. They can hardy believe that a robot can attach and milk a cow automatically.”

The actual milking process takes 7.5 minutes per cow from the time she enters the robot until she leaves.

“The robot has a stall similar to the old Surge side-opener stalls. The gate opens and a cow comes in. She is attracted in there by feed. There is a brush that comes out under the udder and brushes off each teat and sprays it off with disinfectant. Then it blows a little air to dry it. The brushes retract and then the arm swings back under and attaches each teat cup one at a time. It is guided by a laser light,” Dean said. “Once the cows are milked, they come off one at a time as each quarter is done. A post dip is sprayed on each teat and the gate is opened and she exits the parlor. We’re averaging milking three times a day right now. They said we’d been getting a little increase and we have noticed a 10% to 12% increase in production. That is mainly because of the additional milkings. We were milking twice a day in our other parlor before the robots.”

The system is run by a series of computers and can be monitored via cell phone, Doug said.

“We have four computers here. There is a computer in each of the robots, there is a PC computer we use for our herd management software and then there is a computer in the milk house that coordinates the washing of the system,” Doug said. “The washing system shuts everything down, including the robots, and washes everything from the robot down to the bulk tank. After the milk truck picks up the milk it will wash the bulk tank separately. The four computers are all communicating with each other, but they each have their own purposes.”

The robots capture a huge amount of data that can help with managing the herd.

“We have a lot of different data that we can pull up. Each individual cow will have daily body weights, milk temperatures, conductivity and color on each of the quarters, how much feed they’ve eaten, how much milk they produce, and how much time they spend in the robot. And, of course, it keeps track of all of the herd management data, including breeding dates,” Doug said. “Each individual quarter is monitored during each milking for color and conductivity. Generally, a high conductivity cow has mastitis. If it catches a cow with high conductivity, the robot will flag her and put in into a report. The milk is separated in one of two ways. We have it set up so we separate it manually. If we catch a cow that needs treated, we can send that milk down to the sewer and it does not go into the tank. And after it milks a treated cow or a fresh cow, it does a local wash of that robot and cleans it completely out before it starts the next cow.”

There was a robot learning curve for the cows as well.

“As far as training the cows, the first three days we had to push the cows in. Three days before we started using the robots for milking, we started feeding them in the robot. By the time we started, they were used to the space and the sounds it made and it went very easily for us. I’d say that in two weeks, 80% of them were visiting on their own,” Doug said. “When you get down to that last 20% they get all the feed they need out in the bunk and they don’t have a desire to go in there for that feed. It will take them to come fresh producing a lot of milk and needing a lot of feed to want to come in on their own. Right now we’re down to less than 5% fetch cows. They kind of figure it out.”

For cows new to the system there is a pen to force them through the robot.

”We have a commitment pen where the only way out is through the robot. First calf heifers tend to be more timid and they need a time when another cow won’t come in and move them out of the way. I’d say on average it takes two weeks for them to start coming in on their own. For the most part they develop their own routines,” Doug said.

Both Doug and Dean agree that the robots are a great and beneficial addition to the farm.

“I think it was the right move for us. It fits our operation really well,” Dean said. “It would be tough if we had to hire all of this labor. I think the robots are a super way to go. I still am very close to all the cows and get to pet them every day when I feed and care for them. I think this helps a small operation still make it in today’s economy.”

Dean hopes that will continue to be true for future generations of his family.

“Now my son lives here and he has a son who will hopefully want to continue and we plan to do things so he can do that,” Dean said. “My great grandfather lived here. My grandfather then purchased it and they all milked, by hand. They didn’t have robots back then.”

See more photos of the robotic milker and Horst Farm.