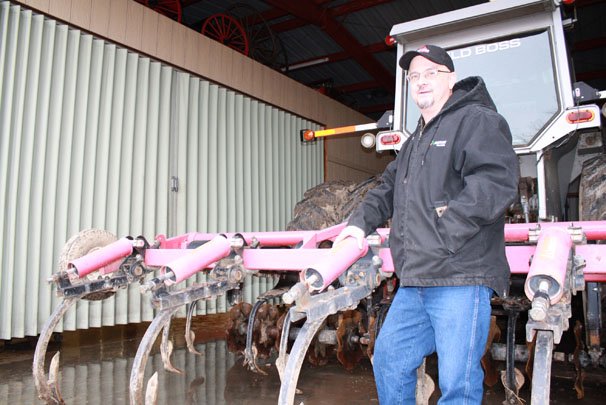 Jeff Sberna, from Bellevue, could not find a tillage tool that went deep enough for him, especially with the limited horsepower he had available.

“We only had the Oliver 1855 to pull with. That was the biggest tractor we had at the time. I couldn’t get to the depth we wanted with a regular chisel plow or the Soil Saver. I couldn’t get it in the ground and then I couldn’t pull it, even if we borrowed a neighbor’s tractor and get more horsepower on it,” he said. “Even with the Soil Saver I couldn’t get the depth I wanted. Everybody goes for the hard pan or the plow pan, but I wanted to get down deeper to get the roots down.”

He went to work to create a piece of equipment that would do the job and the Chisel Ripper was born.

The efficient machine Sberna fabricated shatters soils from 13-inches to 15-inches deep with only 20 to 25 horsepower per shank, depending on the soil conditions, at speeds in excess of eight miles per hour. The unique design of Sberna’s Chisel Ripper leaves firm dirt on either side of the deep rips. At the same time, residue is aerated and mixed with the top three to four inches of the soil.

The idea began to take shape on one of his days spent sifting through retired equipment.

“We were looking around the area ag junk yards and we found parts for a three-point hitch for our smaller tractor. We ended up using an old Oliver field cultivator and other parts that we converted into the first Chisel Ripper. I revamped that one and sold it. It wasn’t the prettiest thing. It was made out of old parts from the junk yard,” he said. “It looked so heavy, at first I was worried that it wouldn’t have enough spring to it, but it worked really well. Even if it is a little hard, it will stay in the ground. We re-did that and there were more things I wanted to do if I started from scratch. So, I started building my second one. It was working so well and was a nice piece of equipment. I got lined up with a guy in Georgia and we are fabricating these things now. I keep tweaking things to make it better. I am working on tweaking the fourth version of it now.” 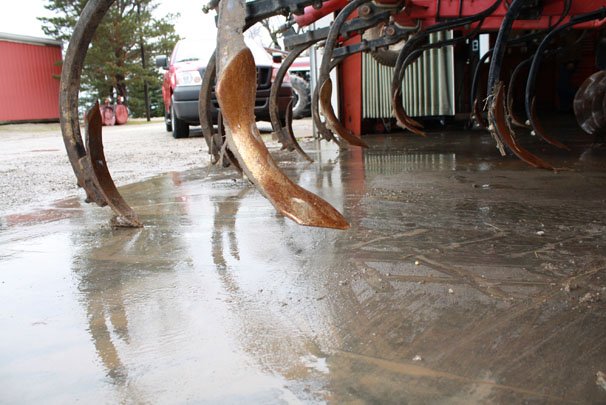 The Chisel Ripper has three independent coulter gangs that are spring-loaded and can be equipped with waved coulters. The gang bearings have grease fittings and are heat resistant to over 400 degrees. The rear shank assemblies have spring resets and a lifetime warranty from Bellota Agrisolutions. As an option, the Chisel Ripper can be equipped with hydraulic gauge wheels for 110 to 125 horsepower tractors.

“We added some Danish tines and we added heavy duty vibro tines that work really nice. I staggered in the vibro tines in the middle of it so the trash can flow through,” he said.

The question he gets most often, is what makes the Chisel Ripper different from tillage equipment that’s already on the market?

“The biggest difference is the redesign of the rear shank. To get the depth I wanted to run, I had to redesign the shanks. I had to re-tool everything in the back. The big shanks in the back are only on 30-inch centers. That’s the key to the soil shattering and instead of turning over. These shanks also leave the dirt more open than conventional shanks.”

In between, he wanted to work the soil.

“That’s why we have the vibro tines. They work in the residue really nicely. They are extremely heavy duty so they dig 3 to 4 inches deep so the residue is not laying flat and has better utilization for moisture retention.”

He also had compaction in mind when he created the design.

“By leaving the soil under the front tines it supports our tires, so the deep rips are not compacted. This leaves an open path for the plants roots to follow the moisture and allows moisture to wick upward.”

The end result is an efficient, fast moving tillage tool that can be a good fit for large or small farms using tillage systems across the spectrum.

“In some areas we use one pass, in corn stalks we usually go two or three passes. The guys that are using the v-rippers need 450 horsepower to pull them. I am getting the depth without that horsepower. Right now we have a 12-footer, but I have been talking about designing a 36-footer too,” he said. “This is a whole different concept in vertical tillage. I have this up to 10 miles per hour behind a 130 horsepower tractor — it is a high-speed tool. You can just cruise with it.”Sberna had his tillage tool at the 2012 Farm Science Review where he got very positive feedback on it and he has seen significant results on his own farm.

I got a lot of good feedback from the Farm Science Review this year,” he said. “There is not a lot of stuff being built for the small farmers out there and there is a lot of interest in this. This is something that is totally a unique design. With the way it works in the residue and the depth we get, it has taken on a life of its own.”

The framework for the machine is done in Atlanta and it is assembled in Bellevue. Sberna was the Successful Farming and Asgrow Ag Innovator of the Year in 2010 with the Chisel Ripper. He sells it under J&D FarmBuilt for $17,500 through Ashland Tractor and is actively looking for other dealers to carry it.

The Chisel Ripper is not his only invention. He’s also created a compost turner from a salvaged snowplow and a disk transformed into a finishing tool. 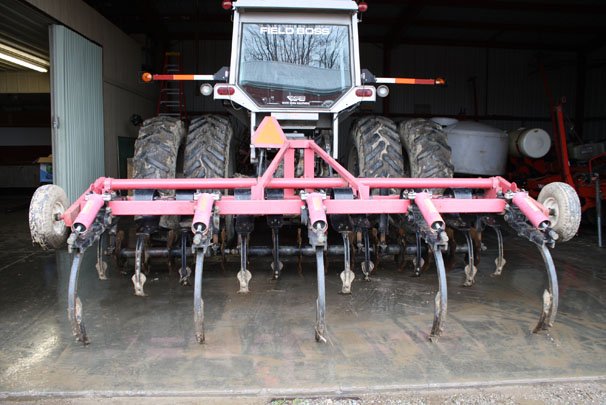