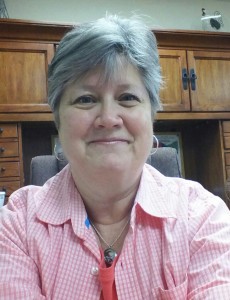 State Executive Director for Ohio’s Farm Service Agency (FSA), Steve Maurer, would like to announce that Teri Caudill has been selected as the County Executive Director (CED) for the Scioto/Pike County FSA office.  Teri will begin her new duties on March 25, 2013.

Teri began her career for the Scioto County FSA office as a Program Technician in 1986.  She was responsible for multiple program areas including; Administrative, Automation, Tobacco, Non-Insured Crop Disaster Assistance Program (NAP), Farm Records, Marketing loans and the Milk Income Loss Contract Program (MILC).  Teri currently serves as the Acting CED in the combined Scioto/Pike County FSA Office and has held this position several times over the past few years.  She manages all FSA programs and operations in the office and assists with all programs as needed.

Growing up in Florida, Teri moved to Scioto County in 1973 and is a graduate of South Webster High School.  She attended the University of Denver and has been married to her husband, Mark, for 36 years.   They have three children. Brian served in the US Air Force and is stationed in Ft. Lee, VA.  Scott served in the USMC and is a dispatcher for the Ohio State Highway Patrol, and Ellen is a Respiratory Therapist at Adena Pike Medical Center in Waverly, OH.  They also have 4 beautiful grandchildren, Emma, 8, Peyton, 5, Lyla, 5, and Easton, 3.