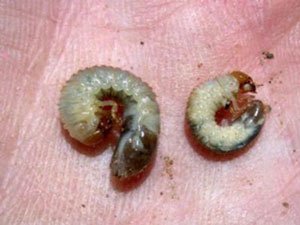 Asiatic garden beetle grubs could be an issue for corn

Northern Ohio corn growers who experienced unexplained stand loss the past couple of years may have fields infested with Asiatic garden beetle grubs.

Last year was the first known instance of Asiatic garden beetle grubs causing significant stand losses in corn in northern Ohio just below Lake Erie, said Hammond, who also has an appointment with the Ohio Agricultural Research and Development Center.

Growers who planted corn following soybeans in sandier soils reported last year finding Asiatic garden beetle grubs that caused some stand losses, Hammond said. What’s surprising is that the grub, a species that is more associated with being a minor pest in turf, now appears to be much more damaging to crops than most other grubs.

“This is a new pest in the sense that this is the first year we’re going into the growing season knowing that the pests are in some soils,” Hammond said. “If you’re in northern Ohio and have had unexplained stand losses, this may be it.

“Growers who have had unexplained strand losses in the northern part of Ohio may need to consider doing something about the pest this year now that we know what the problem is.”

The Asiatic garden beetle was introduced to the U.S. in the 1920s on the East Coast and has since made its way across the country, Hammond said. The grubs were recently associated as a newer corn pest in northeast Indiana and southwest Michigan from 2006 to 2008, always in sandier soils following soybeans.

Some fields in Ohio meet those conditions, Hammond said.

“It’s a problem for farmers because the grubs feed on germinating corn seeds and roots in the spring, causing stand reductions,” he said.

The problem with these particular grubs is that there really isn’t much that can be done to mitigate them once they’ve begun feeding in the soil and causing stand reductions, Hammond said.

“Growers can scout their fields to see if they can find the pest and then use a preventive treatment of liquid or granule soil insecticides labeled for grub control in their fields,” he said. “But the bottom line is that because this pest is so new, there isn’t much data as to what insecticides are best to use.

“While scouting can potentially find grubs, that won’t indicate if there is a problem. So growers who’ve had a history of unexplained stand loses should make sure they use a soil insecticide that has grubs on the label.”

“None of the infested fields over the years appear to have been protected by the various seed treatments,” he said. “Transgenic corn hybrids aren’t designed for grub issues; all of these corn hybrids that were damaged last year had seed treatments on them that didn’t do any good.”

Growers with a history of unexplained stand loss may have to go with their field’s previous history as the primary reasoning in deciding whether to use a soil treatment with insecticides, Hammond said.

“The grubs have to be managed prior to planting with a soil insecticide if growers already have them in the soils in their fields,” he said. “Any kind of stand loss in corn hurts the yield.

“You can have a few bushel losses or up to a 30 to 40% yield loss, depending on how heavy or great the stand loss.”