“I am a fifth generation farmer on one side and sixth on the other side. I started farming after my dad passed away in 2003. My mom and I farm together. It works out really well. It is just us with one employee. Mom is the combine operator and the gopher and she does whatever else she needs to do. I am 30 years old and this will be my eighth year farming.

“We’re right on the edge of the Scioto marsh at the home farm so we have some really good muck dirt. We also farm some clay knobs in the central part of the county, but over half of the operation is on the edge of the marsh. Everything we farm is pretty flat. What I consider a hill and what everybody else considers a hill are often two different things.

“Our soybeans are primarily no-till. For four years we have been flying cereal rye on top of the standing corn. We let that grow up through the winter, then plant soybeans into it and kill it off. Half of the corn is conventional tillage and half is no-till. We switched our nitrogen program to urea and I like to work that in with a vertical tillage tool. We do not plant any wheat.

“Some of the weather people are saying that we will have above average precipitation for the next 90 days, which concerns me a little bit. I think we’re sitting pretty well here with moisture in the Eastern Corn Belt. I hope it just doesn’t shut off. We increased our crop insurance some this year, but other than that I am not making drastic changes for 2013.” 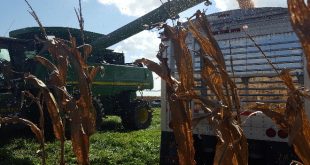