Ag Credit Stockholders Elect Four Farmers to Board of Directors

Charles Bostdorff farms 700 acres of corn, soybeans, wheat and barley in Wood County, and has a pure bred Charolais cow/calf operation with a cattle feed lot.  Mr. Bostdorff was initially elected to the Board in 2001 and represents western Lucas, Henry and Wood counties.

S. Jerry Layman cash rents a 180 acre farm and plants no till corn and soybeans, and works with a younger brother in his 4,000 acre no-till operation raising corn and soybeans.  They also run a part-time custom farm drainage business.  A retired high school agriculture instructor and principal, Mr. Layman was first elected to the Board in 2004 and represents Hardin and Hancock counties.

Deborah Johlin-Bach and her husband farm 1,200 acres rotating corn, soybeans, wheat and/or spelt.  Additionally, they feed out steers for market.   Mrs. Johlin-Bach was elected to the board in 2007 representing eastern Lucas, Ottawa, and Sandusky counties.

Lauren Kamm owns a 1,200 acre operation with the tillable acres being planted in soybeans, corn, and wheat. He has also completed timber stand improvements on the wooded acreage.  Mr. Kamm serves the Lorain, Huron, and Erie county area.

About Ag Credit:  Ag Credit takes pride in financing the growth of rural America including the special needs of young, beginning, small and minority producers. With more than 6,300 customers and $1.325 billion of assets, Ag Credit is one of the region’s leading providers of credit and insurance services to farmers, agribusiness and rural residents in northern Ohio. Learn more at www.agcredit.net 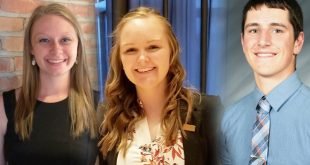