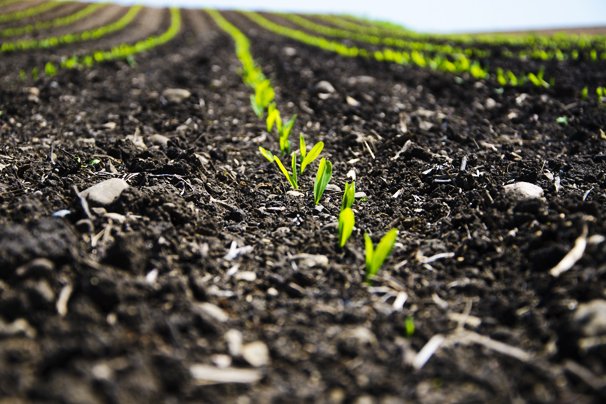 While the conditions for emerging crops have generally been close to ideal in many fields, problems have been showing up.

Dekalb Asgrow agronomist Jeff Rectenwald has come across some problems with crusting in fields.

“Soil crusting and crop emergence seems to be a widespread problem in Ohio this spring. This not a hybrid specific issue, it is environmental and soil type specific,” Rectenwald said. “Growers need to be scouting their fields to determine which fields may be a candidate for rotary hoeing.”

No-till seems to have helped the situation in at least one Clark County field planted in late April with a population of 34,000.

“There are no problems, a near perfect stand. So far, no-till this spring looks pretty good. In most cases it is less susceptible to pounding rains causing emergence and crusting problems,” Rectenwald said.

Soil crusting, of course, can result in uneven emergence, though uneven emergence can be the result of several other factors as well. An uneven stand can also be due to soil moisture and temperature variability within the seed zone, poor seed to soil contact caused by cloddy soils, soil crusting, shallow planting, or grub feeding, according to Ohio State University Extension specialists.

In a recent CORN Newsletter, Peter Thomison, Pierce Paul, and Ron Hammond, with Ohio State University Extension (with some help from Greg Roth at Penn State University) compiled the following list of a few other common things to look for with an emergence problem in corn this spring.

– No seed present. May be due to planter malfunction or bird or rodent damage. The latter often will leave some evidence such as digging or seed or plant parts on the ground.

-Seed with poorly developed radicle (root) or coleoptile. Coleoptile tip brown or yellow. Could be seed rots or seed with low vigor. Although corn has just started to emerge, or has not yet emerged in many fields, growers should carefully inspect seedlings for symptoms of disease, especially in lower lying areas of fields where ponding and saturated soils were more likely.  Seeds and seedlings that are brown in color, are soft, and fall apart easily while digging, are obviously dead or dying. Seeds and seedling roots or shoots with white to pinkish mold growing on them are likely victims of fungal attack and will likely die. Pythium and Fusarium are common fungi that attack plants and cause these damping-off or seedling blight symptoms under wet, cool conditions. It is more difficult to diagnose disease damage on plants that also show abnormal growth caused by cold soil conditions or by crusting of the soil surface. However, dark, discolored roots and crowns, instead of a healthy creamish-white appearance, are typical symptoms of seedling diseases problems. So, it is best to check these seedlings very closely for dark brown or soft areas on seedling roots and shoots. Any discoloration will indicate a problem that could worsen if the soils remain cold or wet.

– Seed has swelled but not sprouted. Often poor seed-to-soil contact or shallow planting: seed swelled then dried out. Check seed furrow closure in no-till. Seed may also not be viable.

-Skips associated with discolored and malformed seedlings. May be herbicide damage. Note depth of planting and herbicides applied compared with injury symptoms such as twisted roots, club roots, or purple plants.

-Seeds hollowed out. Seed corn maggot or wireworm. Look for evidence of the pest to confirm.

– Uneven emergence. May be due to soil moisture and temperature variability within the seed zone. Poor seed to soil contact caused by cloddy soils. Soil crusting. Shallow planting. Other conditions that result in uneven emergence already noted above, including feeding by various grub species.

– Patterns of poor emergence. At times they are associated with a particular row, spray width, hybrid, field or residue that may provide some additional clues to the cause. Often two or more stress factors interact to reduce emergence where the crop would have emerged well with just one present. Also, note the population and the variability of the seed spacing. This information will be valuable in the future.