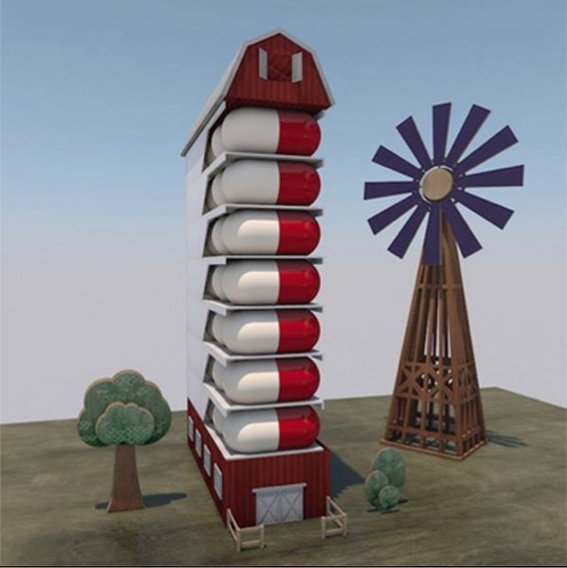 When Carrie Mess and her mother-in-law stopped in at Panera Bread for lunch, the restaurant chain did not see it coming. And, quite frankly, neither did Carrie, a.k.a. “Dairy Carrie,” a former city girl turned dairy farmer and blogger from Wisconsin.

She was aggravated with the antibiotic-free claims about the chicken on the menu for the almost $20 lunch for two. She shared her feelings about the menu through social media and found out that the menu was just the start of what she feels is anti-agriculture fear-driven marketing at Panera Bread.

“I snapped a photo and put it on my Dairy Carrie Facebook page as a conversation starter. I didn’t really expect much out of it, but within a couple hours I’d had a lot of conversation on it. Then one of my friends sent me a message asking if I had seen the ad campaign about the EZ Chicken. More people were finding more stuff and sending it to me all the time,” Mess said. “I wasn’t bothered by the idea that people would like to purchase chicken not raised with antibiotics. I have nothing against that whatsoever. The images they had though, alluded that farmers that use antibiotics are lazy. That was point one that was unacceptable to me.  Then, in general, they were saying that if you buy food anywhere other than Panera Bread it has antibiotics in it. Using fear to sell sandwiches is not acceptable in my book. That is not what we should be doing.”

The more she saw, the more agitated she got. In response, she wrote a post on her popular blog about the unsettling marketing plan. Things progressed rapidly from there. 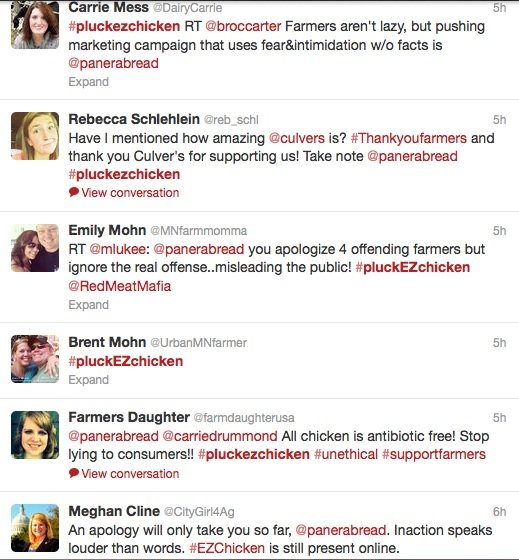 “The first day I posted the blog, I had over 26,000 views and now it is over 150,000 views,” she said. “My email and phone messages and Facebook are overwhelming. My phone battery is dying after a couple of hours every day.”

The blog drummed up agricultural outcry from across the country with people taking to Panera Bread’s Facebook Page and to Twitter with the hashtag #pluckezchicken. They eventually resulted in a response from Panera Bread.  Panera’s chief marketing officer, Michael Simon called Mess.

“We had a discussion about their marketing campaign. We talked about modern ag practices, but my goal was to have the marketing campaign corrected. He strongly stands behind his company’s message. He said we will take down any of the images that are offensive,” Mess said. “I asked him about a public apology and he said they will put out a statement clarifying their stance on the issue. They did take down a couple of photos but that has been it. In general though, the campaign is still up and we are still angry.”

Another part of the discussion was the seemingly divergent science on the issue, based upon the perspective of either side of the conversation.

“He said that for any study I put up, he can find a study that says the opposite. There is some sort of science to prove anything if you want to find it. That is where so much of the confusion about our food comes from,” she said. “He felt pretty strongly that his facts were the correct facts and I, of course, feel my facts are the correct facts. We might not agree on the facts, but we don’t really have to to affect change with this marketing campaign. It is not OK to use fear for marketing.”

The folks at Panera Bread are taking action in response to the agricultural concerns.

“The EZ chicken character is no longer in any of our digital and social media. There are no plans to bring the EZ chicken back. The pill shaped chicken is still there,” said Linn Parrish, vice president of public relations for Panera. “People have their different perspectives and all we can talk to is what we set out to do. The intent of the EZ chicken character was to show that Panera has taken the hard road in terms of sourcing protein made without antibiotics.”

“Ten years ago our chief concept officer that leads our culinary team was bemoaning the fact that our chicken didn’t taste very good. He went on a journey to find better tasting chicken and he believes that he found that in chicken that has never been raised with antibiotics. We chose it for taste. That is what we were referring to — the hard road we have taken. We certainly realize that antibiotics play a role in the health of animals. The EZ chicken character we think was misinterpreted and we really apologize for that. Our intent was never to denigrate other types of farming practices. We heard the concerns and respectfully removed it.”

The pill barn image shown at the top is still up on the Panera Facebook page and while they have removed the EZ  chicken character from social media the actual campaign ‘the hard road’ is still being used.