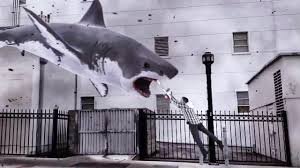 Photo courtesy of the SyFy channel.

I’ll take a little rain any day over a “Sharknado”

The weather in Ohio has been even more unpredictable than normal the past few years. If it isn’t a drought, we are nearly drowned with rain. The storms a few weeks ago caused damage to crops and structures that is still being felt in many areas of the state.

As farmers and landowners clean up the messes and assess the damage from those storms, they must often shake their heads and wonder why they can’t just order a year of “normal” weather. My take on the weather is that it could always be worse; at least the most recent and devastating round of storms wasn’t a “Sharknado.”

Last week the SyFy channel released “Sharknado,” a bizarre movie they created about a shark tornado that hits California. Literally, thousands of sharks flow through flooded streets and storm drainage systems and eventually fly through the air as a tornado flings them at unsuspecting citizens. It is hard not to laugh at the udder ridiculousness of the situation, but I found it made me feel pretty good about the unceasing rain we have had and the small flood I had in the barn recently. Really, a little water is nothing compared to sharks falling from the sky to eat you alive.

Despite the fact that “Sharknado” was absolutely ridiculous, millions of folks watched it and tweeted about it when it was originally aired on Syfy. It has become quite the hit movie of the summer and a sequel has already been planned.

Make sure you don’t miss your chance to watch a day of goofy shark films ending at 9 p.m. on Saturday, July 27 with a re-airing of “Sharknado” on SyFy. If you watch nothing else, catch that last 15 minutes. It is astonishing and will certainly make you laugh and consider yourself lucky that sharks aren’t landing in your barns and fields of crops. As for me, I’ll be adding a chainsaw to my list of tools I leave in the barn because you never know when it might come in handy, just in case of a “Sharknado!”