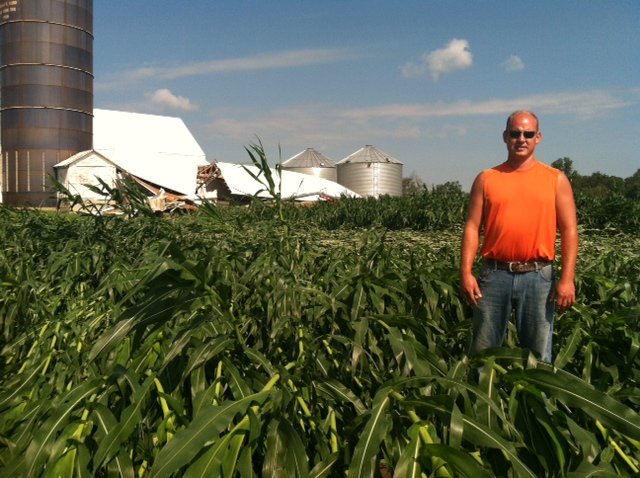 After enduring steady rains for weeks, Seth Kohnen’s Mercer County corn was looking fantastic yesterday morning. Unfortunately, that is not the case today.

“We lost hundreds of acres of corn that have been broken off. It is kind of depressing, but there is nothing we can do about it so we have to move on,” he said after a powerful windstorm swept through late yesterday. “It was setting up to be the best corn crop we ever had. We had perfect stands, perfect rain, and perfect weather. It was too good to be true, obviously. It is my opinion that the wind was blowing 80 miles an hour for 15 to 20 minutes at least. I have never seen winds sustained that fast for that long.”

After sorting through the wreckage of a battered machinery shed and looking at his damaged fields last night and this morning, Kohnen estimates that roughly a third of his corn crop in the worst hit area was snapped off.

“The corn that is broken off is done. Maybe the stuff that broke off three or four feet off the ground will put out an ear and the neighboring plant might pollinate it,” he said. “We farm further to the north and everything was fine, but everything we farm five miles north of Celina was severely affected by the wind. This corn hasn’t silked yet and there is a plethora of bugs already out to eat to eat the juice from the xylem and phloem of the corn. When the silks come out it will be the freshest green matter to eat and I think the bugs will stick around and attack that next.”

The corn that does make it to harvest will offer additional challenges.

“We’ll have to dig the corn reel out of the corner of the barn and it looks right now like this would have to be shelled in all one direction,” Kohnen said.

In the meantime, it will be up to the insurance adjuster to assess the situation.

“We had a little hail and next Wednesday or Thursday, the adjuster will be coming out for that anyway,” he said. “After that it would just be the revenue protection insurance and however that handles the losses across the farm.”

Those with wind specific insurance coverage need to contact their agent immediately to report wind damage to their crops, said Ryan Fennig, with Fennig-Homan Agribusiness.

“We have been receiving calls about corn that has been snapped in half in pieces, corn that is bent over and corn that is just kind of leaning over — all the problems with the high wind yesterday. We offer a wind endorsement policy so there were some individuals that have some coverage for this type of weather disaster,” Fennig said. “If they have a wind endorsement on their policy, they need to notify their crop agent immediately so an adjuster can come out and assess the damage. There is a time issue where we need to assess the damage so many hours after the disaster took place.”

Wind damage is showing up in the corn crop in localized areas around the state. The yield loss associated with the damage depends on the specifics.

“Yield effects of green snap depend on the number of plants snapped and where the breakage takes place. Stalks that break above the ear will usually produce an ear, but if nearby plants are intact, they will shade the broken-off plants and reduce ear size,” said Emerson Nafziger at the University of Illinois. “When plants break at the node below the top ear, dormancy will break and allow the next ear down to develop, but it may not receive enough pollen to produce a lot of kernels. Plants that break near the ground won’t produce yield, of course, but will allow more light to reach intact plants, which in turn will produce more grain. Loss of plants thus typically reduces overall yield less than the percentage of broken plants might suggest.”

The problems with green snap tend to occur at the plant nodes below the ear.

“When soil moisture and temperature conditions are favorable for growth during this stage of plant development, plants elongate rapidly but stalks are unusually brittle. Stalk brittleness is greatest in rapidly growing corn under high temperature, high soil moisture conditions,” wrote Peter Thomison, Ohio State University Extension corn specialist in the CORN Newsletter. “There is speculation that rapidly growing plants are more susceptible to snapping-off for several days during the few weeks before tasseling because there has been little time for plants to develop lignified tissues at the nodes.”

The severity of green snap in fields is dependent on a number of factors.

“Vulnerability to green snap damage varies among hybrids. However, all hybrids are at risk from such wind injury when they are growing rapidly prior to tasseling. The use of growth regulator herbicides, such as 2,4-D or Banvel, has also been associated with stalk brittleness, especially if late application or application during hot, humid conditions occur,” Thomison said. “Once the crop tassels, green snap problems generally disappear. Back in the 1990s, Nebraska researchers observed that it was often the most productive fields with the highest yield potential that experienced the greatest green snap injury. They concluded that factors promoting rapid growth early in the growing season also predisposed corn to greater green snap injury.”