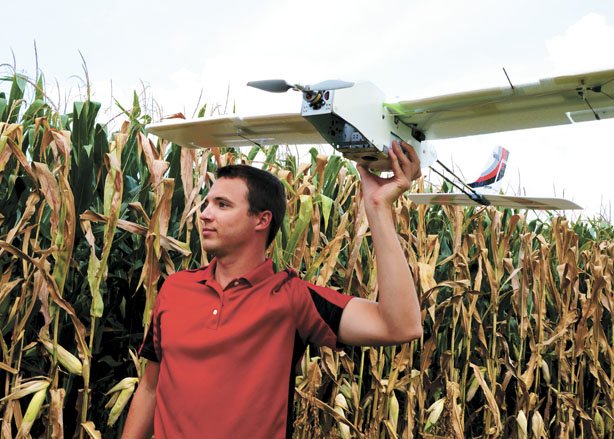 Cleared for takeoff at the Farm Science Review

There is good possibility that, if it is buzzing around over an agricultural field at the Farm Science Review, it is an unmanned aerial vehicle (UAV). These devices clearly appeal to the fancy gadget fascination so prevalent in agriculture but can also serve a number of important and cost-saving purposes in a wide array of agricultural operations.

One of the advantages of the Farm Science Review being a part of an Extension land grant university is the ability to cross reference one portion of campus with another. UAVs (or drones) are one example of an exciting collaboration will be seen buzzing overhead at this year’s event.

“The aeronautical personnel in the engineering department said they needed a nice, wide open space to fly new drones,” said Matt Sullivan, Assistant Manager of the Farm Science Review. “We couldn’t think of a better place than the 1,200 acres at The Molly Caren Ag Center.”

After going through the process of getting clearance from the Federal Aviation Administration (FAA), the aeronautical folks at OSU plan to fly these unmanned vehicles for display during Farm Science Review. Look for two and maybe three of these planes flying during field demos every day of the show at 2 p.m.

“Yes there has been some negative publicity about drones, but when you look at it from a precision agriculture perspective with yield monitors and soil sampling, it gives drones many positive uses to make any operation more productive,” Sullivan said.

The technology is out there for drones to do tasks as amazing as taking seed counts. Ultimately, one goal is to fly these planes before a corn field tassels and use the data collected to predict yield. It isn’t the silver bullet to agriculture’s continued success, Sullivan said, but it’s another tool in the toolbox.

One commercial UAV operation that is taking off is Precision Hawk in Indianapolis that sells the Hawkeye Lancaster Model UAV that resembles a large model airplane.

“We manufacture a small unmanned aircraft with a about a four foot wing span that can carry a plethora of different sensors — a visual sensor, to thermal sensor or multispectral sensor that can be used in agriculture,” said Tyler Collins with Precision Hawk. “It is just a small plane that fits in a case that you can take out to the field anytime you need to survey, whether it be early crop counting with the visual sensor, watershed mapping or NDVI (Normalized Difference Vegetation Index) plotting. You just take it out, plug the sensor in, put a battery in and toss it. Any farmer, even with no aviation experience, is able to use it.”

The field boundaries are mapped out on a geo-referenced computer program ahead of time and, with a click of a button and a toss of the plane, the Hawkeye Lancaster takes to the skies. Once in the air, the UAV monitors wind speed and other conditions so it can maintain a steady height and speed required for capturing high quality images. It then sweeps back and forth over the field to gather the data and stitches all of the images together to form a detailed composite picture of the entire field.

“You can open it in any GIS software that would be used by a farmer or consultant. You can move your mouse over the picture and see the exact GPS location in the image,” Collins said. “We have been working primarily with researchers in agriculture and seed departments. They are making the correlations and we are able to pull the NDVI plots, look at soil health, and check crop health. We will be doing studies in the future to look at how much we can actually improve yields on farms.”

In terms of crop production, UAVs can be used to assess plant health, tile, diseases, weed pressure and crop development. The Hawkeye Lancaster is completely computer operated and costs around $25,000. The plane weighs around three pounds and is three feet from nose to tail. It runs quietly with an electric motor and was designed to be user friendly.

“The wings and tail are made of Styrofoam. They are designed so that it if it catches a bush or a corn stalk, the wings or tail will rip off and it is a cheap, easy fix that can be done in five minutes to fly again,” he said.

Though there is quite a bit of potential with UAV use in agriculture, there are still some issues that need to be addressed. Right now, Precision Hawk is operating the planes under model plane regulations, but to maximize the potential for commercial applications, the FAA is getting involved, which means legalities, paper work and red tape. Commercial use of this technology is currently not permitted, though the FAA is supposed to have a plan in place by 2015. Until then, the FAA could say farm use is commercial or not depending on the day.

Though the FAA is still fairly uncertain about the status of UAVs, Collins said the other inhabitants of the skies have things pretty well figured out.

“We have actually had hawks approach the plane, but once they see how big it is and hear the funny sound it makes, they veer off pretty quickly and leave it alone after that.” 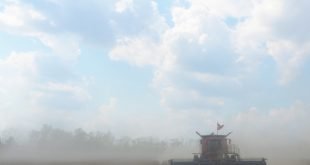