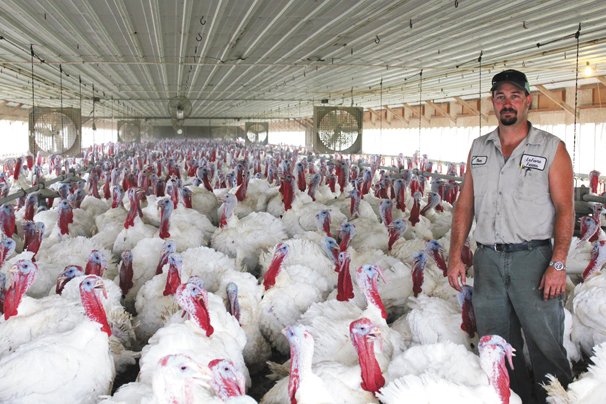 When mention is made of turkeys and family traditions, most Americans may think of fall weather and Thanksgiving dinner. At Lefevre Farms in Fort Recovery, turkeys are a year-round tradition that runs generations deep. Current owners Tom and Lisa Lefevre are doing their best to make sure the farm remains a viable option for any of their seven children who choose to carry on the family business.

Tom is the third generation to farm the land at Lefevre Farms, which has included turkeys since the 1950s when they were raised on range. Since that time the farm has grown to include 12 poultry barns with a 66,000-bird capacity in addition to a cattle barn and a successful row crop operation.

“We raise turkeys for Cooper Farms. We raise them up to 21 weeks of age, close to 50 pounds, before they go out and we can run three flocks a year,” said Lefevre, whose forward thinking farming practices have earned his farm the Environmental Stewardship Award from the Ohio Poultry Association.

“We’ve started doing a lot of things that are good for the ground, good for us and hopefully good for our kids’ ground. I think generations in the past have used the ground quite a bit and depleted much of our organic matter and impacted the soil tilth. We have to figure out how to reclaim that,” Lefevre said.

He understands there is no quick solution when looking at soil quality and has implemented several practices to improve soil conditions including soil testing, cover crops, organic fertilizers and crop rotation.

“We soil test all of our fields regularly, dad started that long before me. We rotate and every acre gets sampled every three years,” Lefevre said. “Anytime we apply litter from the barns we take a nitrogen availability test the next spring so we don’t over apply nitrogen if there is already nitrogen available to the crop from the litter.”

The soil tests measure all the nutrient and micronutrient levels, water holding capacity, organic material and soil pH. Monitoring these factors helps ensure everything stays in balance. In addition, their spreaders and other manure handling equipment are equipped with scales and utilize GPS to apply the litter more efficiently at a variable rate across the field. Most of the tractors are even equipped with tracks to avoid soil compaction.

Once the litter is applied to a field, Lefevre likes to follow a crop rotation of two years of corn, that pulls more phosphorous then soybeans, which are planted the following year. Often they will follow with wheat and use the straw for bedding. Nutrients used in that rotation balance with the nutrients available from the litter and alleviate the need for commercial fertilizers.

When applying any sort of fertilizer, water quality becomes a concern. Lefevre Farms is located near Grand Lake St. Mary’s, but it is actually part of the Wabash watershed. They are also under the threshold to apply for a permit, but Lefevre still utilizes a Certified Nutrient Management Plan because he believes it is the right thing to do.

“Manure storage is a big thing. What typically used to be done is they would pile it in a field because with turkeys or any poultry, you have to take the litter out when the birds are out. There are times when the weather’s not cooperating so that is a big thing that we can take it to the building, store it until the time is right to apply and we don’t lose nitrogen because it’s too hot,” Lefevre said. “Fall is by far the best time, when the air temperature is below 60 and it’s dry enough that we can get it incorporated.”

New manure handling equipment was purchased to enable them to go straight from the building to the field. Now manure never has to be dumped on the field and picked back up to be spread. It is hauled from the building, spread and incorporated right away and there is no window to get caught by a pop up shower that could lead to nutrient run off.

“All of the ground we’ve owned for years, we have tiled and every year we try to tile more. Tile is one of the biggest advantages, although it may seem backward to those outside farming, if you can drain the soil it holds nutrients, where saturated soil produces run off. We test the outlets of our tiles after heavy rains just to see if anything is going anywhere,” Lefevre said. “I’m always amazed and think field tile water is cleaner than drinking water. Our tight clay soils don’t let any nutrient through so the biggest fear is surface run off.”

Installing drainage tile enables the field to drain more efficiently allowing it to become a sponge that can absorb a heavy rain and hold it. Lefevre believes that is more important than having cover crops or residue, although he practices both cover cropping and no-till on his farm as well.

“I’ve got a cattle barn so I started out using wheat last year with the intention of chopping it off for feed and it worked great for both cover crop and feed. We’re going to sow barley this year and we’ve got some radishes and rye grass. When you apply litter, that cover crop will pull up the nutrient and hold it for the row crop the next year. It also keeps ground in place, prevents run off and erosion and benefits the soil tilth,” Lefevre said. “We’re always looking forward, just because that’s the way you’ve always done it doesn’t mean it’s the right way to do it anymore.”

Looking to the future, Lefevre talks about digging two irrigation ponds, something that will be rather unique to the farms in his area. Current plans are to catch run-off from some small streams, let the nutrients settle out and pump that water back out on their ground. It may cost more than traditional irrigation systems, but it’s definitely good for the environment and a move in the right direction according to Lefevre.

Another concern for the industry is regulation.

“We’re a small number of people. We’re a very small voting block. You’re foolish if you’re not prepared, it’s coming, so you may as well be ahead of the curve and get some things implemented beforehand so you’re not caught,” Lefevre said. “I know the EPA talked about dust control many times. A lot of times they are talking about it as land tillage or with a combine and when they say dust, that’s what they think they are talking about mostly. With poultry everything is dry, it’s very dusty and that would be a challenge for us.”

Even though he sees challenges in the future, Lefevre finds being able to produce food and work with

his family to be the more rewarding parts of being involved in agriculture. And while he compares his need to be a farmer to having a disease, his wife, Lisa sums it up well.

“He always told the kids to get a job you love and you’ll never work a day in your life. To him this is fun, it’s not work,” said Lisa Lefevre. “I like the fact that he’s around. He works hard and is gone a lot, but he’s also around a lot and it’s nice to have everybody working together.”

“There’s no doubt, it’s definitely a family affair. Whether it’s bringing food to the field, driving truck or taking care of the turkeys, everybody’s involved,” he said.

With Tom and Lisa’s seven kids, and now two grandchildren, it’s pretty safe to assume farming and turkeys are a Lefevre family tradition that will be around for a few more generations. 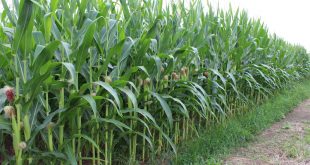 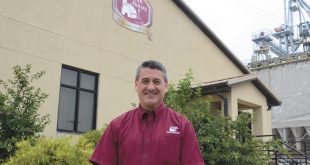 By Matt Reese When many people think of egg production, the packages of shelled eggs …