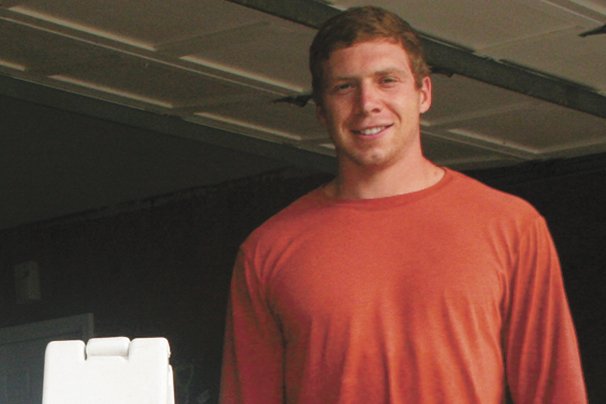 The double life of a fit farmer

Meet Marcus Hendren. Most involved in agriculture would take one look at this young man and his family that farms in Licking County and think that he is not much different than the status quo. Sure, he works hard from early in the morning until late at night helping his Dad and Grandpa on the farm with aspirations of doing the same thing on his own one day. But there is a side of Marcus Hendren very few in agriculture know about.

By day, he is that farm kid who slings hay bales by the thousands, grew up bottle-feeding the dairy calves and learned the value of a long day’s work. In fact, he stepped out of his sweet corn field on an early Tuesday morning to take a break from harvesting and do his Ohio’s Country Journal interview. By night, though, he is considered the 6th fittest man in the world after his recent finish in the CrossFit Championships in Los Angeles.

“CrossFit is increased work capacity over broad and modal domains,” Hendren said. “What it aims to do is to increase your fitness in every aspect, ranging from a marathon runner to a power lifter. The goal is to be good at both ends of the fitness spectrum and everything in between.”

Hendren finds himself in a transition phase as he contemplates his next move. Being in his mid-20s, he still has many more opportunities to better himself in the CrossFit rankings over the next few years, or decide to move forward with his intentions of farming.

The family would be more than happy to have him back full-time on the operation. At first, they weren’t even sure why he left the farm or what he was up to.

“When I first began CrossFit, my folks weren’t too happy with me leaving the farm to try something completely unheard of,” Hendren said. “I was never going to have a chance like this ever again. I can farm when I am older, but I can’t compete in the CrossFit Games forever. While I was still young and one of the best in the world, I made the decision step away from the farm and give it a shot.”

Well into his junior high years, Marcus acknowledges that he was not a particularly imposing physical specimen. That all changed in high school. “I started lifting weights when I was in 6th grade, but I am pretty sure I kept that scrawny physique all the way until my junior year in high school,” said Hendren. “I went from 130 to 170 pounds in the summer when I spent 88 hours on the wagon and baled 50,000 bales of straw. That work helped me quickly develop muscle mass and I kept that up enough to have a successful high school football career and then went on to play at Cornell.”

After his college football days came to an end, Hendren’s competitive nature wouldn’t let him just hang it up. That is where CrossFit came in to play and allowed Marcus to better himself even more.

Some of the activities that push Hendren to the limit in CrossFit competitions include sprinting, rowing, jumping rope, climbing rope, flipping tires and weight lifting. Hendren, by his own admission, lacks in a few of the other challenges.

“I am a terrible swimmer, I think growing up on a farm in the Midwest that is kind of expected,” Hendren said. “We’ve had two swim events and I have been near the bottom of the pack every time. On the other hand I am pretty good at lifting heavy stuff, very much like baling hay when you just pick it up, put it down and keep moving.”

As Hendren has worked his way up the CrossFit ranks he has earned the respect of his peers and has gained thousands of fans that have seen him do incredible feats on national television. Hendren sees that as an opportunity to talk about his farm background to people that may not necessarily know a thing about agriculture.

“I think if you are an athlete and people put you on a platform, you should be using that platform to promote positive things that you are proud of,” Hendren said. “Growing up on a farm, I want to use that platform to inform people about where their food comes from. Everybody needs to eat to live and if you want to be healthy and live a long and happy life, I think it is important to concentrate on the logistics of food production.”

For now, Hendren is living a double life, and fitting his two passions into one day can be grueling, even for one of the fittest men on the planet.

“In the spring leading up to the regional qualifier, I was waking up at 4:30 in the morning to train for a couple of hours and planting soybeans from 7 in the morning until 10:30 at night,” Hendren said. “During harvest when I drive a grain cart there is always a waiting period and that is when I do hand stand pushups against a tire just to utilize my time to the fullest.”

As for what’s next for Hendren, he says there is no doubt that he has a love for farming and that is where he sees himself once his CrossFit days are behind him. He acknowledges that it may not mean working on the family farm or even farming on his own, but the one thing he is sure of it that he will be involved in some facet of agriculture.