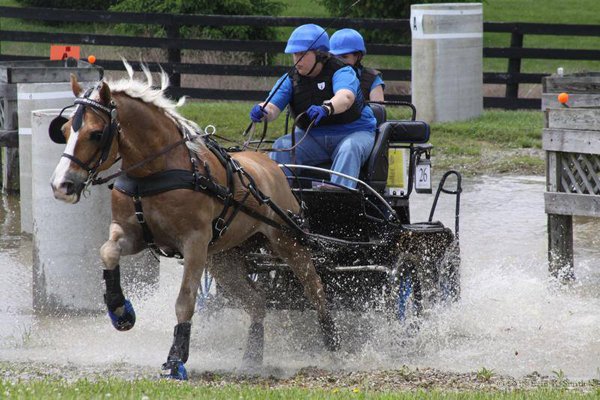 Hess and her horse, Arawak LHF, travel through a water obstacle during the marathon portion of a CDE. Photo credit: Erin K. Smith.

As a veterinarian and a lifetime horse enthusiast, Pamela A. Hess, D.V.M. of Chardon has worked professionally in the equine field since the mid-1970s and has been an avid trail rider since the early-1990s. Although she has always ridden and worked with horses, she had never driven horses.

“I worked as a Thoroughbred racetrack groom and prepped Kentucky sales yearlings for Spendthrift Farm before going to vet school at Purdue University from 1984-1988,” Hess said.

Although Hess is currently the Dean of the School of Equine Studies at Lake Erie College, it was a long road back to Ohio. After vet school and years of internships and residencies to prepare her for her career as a veterinarian, Hess joined the faculty at the Oklahoma State University College of Veterinary Medicine in Stillwater, Okla., but she decided to return home to Ohio in the mid-1990s.

“In 1996, I returned home to Northeastern Ohio and started my own private equine veterinary practice Western Reserve Equine Medical Services in Middlefield, Ohio,” she said. “I focused my practice on horses, donkeys and alpacas for many years.”

When Hess met her future husband, her passion for Curtis and horses led her to start a much different equine journey.

“In 2003, I met Curtis Hess,” Hess said. “Curtis owned 10 Haflingers, and he was a carriage driver. When I fell in love with Curtis, I also fell in love with driving Haflingers! Curtis taught me to drive, and I have been driving and competing ever since. “

Together they show their Haflingers at county fairs and other events. The Geauga County Fair is one of the highlights of their year.

“My husband and I show our driving ponies at The Great Geauga County Fair in Burton, Ohio,” Hess said. “He likes to drive multiples in the draft hitch classes and drives single, pair, tandem, unicorn, 4-up and 6-up. We do a very pretty 6-horse hitch at the Fair! I personally drive singles and pairs. Two at a time is enough for me! “

Although Curtis prefers to drive their Haflingers in Draft Hitch classes at county fairs, Hess discovered a new way to show and drive their horses several years ago when they attended a Combined Driving Event (CDE).

“Curtis and I went down to the Gayla Bluegrass CDE to observe and learn about the sport,” she said. “I got addicted right away.

“The following year, I competed in Training Single Pony and have been active in competitions ever since. I love the challenge of preparing for competitions and being involved in such an active sport.”

The American Driving Society’s website describes a CDE as follows: “Together, drivers and equines of any breed or size form cohesive partners. Equines in singles, pairs, tandems, unicorns, and four-in-hands may compete in Combined Driving. Sometimes likened to a team triathlon, a Combined Driving Event consists of three competitions — Dressage, Marathon, and Obstacle/Cones — that are held over one, two, or three days. The sport is intended to showcase the versatility, training and talents of both horse and driver. “

Hess enjoys the fact that CDEs constantly provide new goals and challenges for her and her horse to work toward.

“I am very goal oriented, and need something to work toward with my horse,” Hess said. “CDEs give me that ever-present goal of improving my carriage driving. You will never run out of things to work on, never finish training for dressage, never get tired of cones and the marathon is totally fun! Each division of the CDE takes expertise and practice, and can keep me challenged and busy forever. “

Although any size or breed of horse can be driven at a CDE, Hess prefers her Haflingers.

“We have always had Haflingers,” she said. “We do own a few Missouri Fox Trotters that I have used for trail riding, but our carriage horses have always been Haflingers.

“They are a steady breed, with a good mind and sturdy build. They are pretty sound and healthy horses, and we have been fortunate to have a great bunch of ponies.”

Hess and the Haflinger she uses at CDE events are always at work to improve their performances.

“I really like the idea that the CDE horse has to be well trained enough for dressage, and yet have the accuracy and control for cones,” she said. “And the marathon requires daring, skill, and an extreme level of physical fitness for the horse. It all requires a great deal of work!”

Even though contestants can participate in CDEs while only owning one horse, there are some extra considerations for which to prepare when participating in any type of driving competition.

“I love carriage driving,” Hess said. “It does take a little more investment in equipment like harness and a carriage and a bigger horse trailer to carry it all, but it is a very rewarding sport.”

The change from riding to driving can be in itself quite a challenge.

“I actually am more comfortable driving than riding now. But I have very nice horses to drive. I am careful, and I try to avoid getting into situations that might be a problem. I know that it is easy to get hurt in a carriage, so you can never be too safe or too careful!”

If Hess ever does have a problem at a CDE, she knows someone will always be there to lend a hand.

“The people in carriage driving are some of the nicest, most friendly and helpful horsemen that I have met in my life,” she said. “We drive with the Western Reserve Carriage Association, one of the largest and best carriage clubs in the country. You can always get some help, some advice and some great food at a potluck with the WRCA! “

For anyone considering starting his or her own journey in CDEs, Hess offers some advice.

“Go to an event to watch and help before you try to compete,” she said. “The rules will seem complicated at first, but time and practice will make it all seem easy after a while. “

Once a decision is made to beginning training for CDEs, the same rules apply as for any type of new equine activity pursued.

“Take some lessons with a professional or very experienced and safe instructor,” she said. “Practice dressage; the speed and accuracy will come with bettering your dressage performance. And you can’t do well in the sport without a good dressage score.”

Even with lessons, it is up to the participant to work at becoming a proficient driver.

Begin your own fun and challenging journey with a CDE by visiting the American Driving Society website at http://www.americandrivingsociety.org/