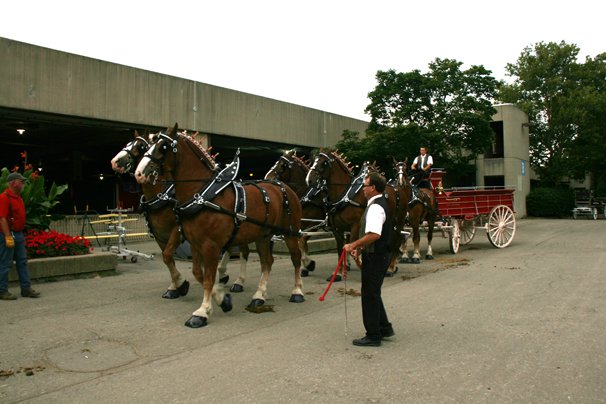 Honsberger takes a final look at the Hammersmith 6-hitch before he climbs aboard the wagon to drive the horses in the show arena.

Driving draft horses is still a thrill for Buckeye native

Though Jason Honsberger of Defiance has driven draft horses most his life and has been a professional driver for nearly 20 years, he still finds holding the lines of a large hitch of draft horses thrilling.

Honsberger started driving horses around the age of 8, but moved up from smaller hitches to driving much larger hitches at a young age. By the time he was 16, he was driving his family’s six-horse hitch in the show ring. Most of his summers as a kid were spent showing horses with his family.

“That is what we pretty much did as a family from the day we got out of school,” he said. “We would go to all the county fairs in Ohio and in Michigan until the day we went back to school.”

Though Honsberger did graduate from The Ohio State University with a degree in business administration, his plans to pursue a career in that field were put on hold when he was offered a job driving draft horses professionally.

“My last quarter at Ohio State I was offered a job at Rocking Horse Ranch in Highland, New York,” he said. “So I talked it over with my parents and they both supported whatever I wanted to do, and if I was going to do it that was the time when I was young and didn’t have any ties.”

So, at the age of 22, Honsberger started his career as a professional driver for the Belgian geldings at Rocking Horse Ranch. In 1999, Honsberger moved back to Ohio to drive for Owl Creek Clydesdales in Fredericktown. He drove the Clydesdale geldings from 1999 until 2004 when the owners of Hammersmith Belgians in Defiance hired him.

Honsberger has driven many different breeds of draft horses during his professional career, but when asked to pick a favorite breed to drive, he still prefers the breed he grew up showing — Percherons.

“Probably overall the Percheron is the best driving horse because they are just a little more athletic,” Honsberger said. “They are a little easier to drive. They’re not as hard-mouthed as Belgians.“

In addition to driving many different breeds of horses, Honsberger has driven both mare and gelding hitches during his lifetime. He has no real preference on which gender to drive. He currently drives a gelding hitch, but he has noticed that recently mare hitches have improved dramatically.

Honsberger may be paying special attention to some of those mare hitches because his younger brother, Ross, is also a professional driver. Ross drives a hitch of Percheron mares.

Though the brothers drive different breeds and sexes of horses, there are times when they still compete against each other. One such class is the Governor’s Cup six-Horse Hitch all breed competition held yearly at the Ohio State Fair.

“We’re highly competitive,” Honsberger said with a laugh. “As we’re competing, there’s nobody I want to beat more, but if I have to get beat, the one person that I don’t mind getting beat by is my brother…but I’d rather be beating him than getting beat by him.

“It’s a good rivalry. It’s usually back and forth — win some lose some. It’s pretty close to a 50/50 battle. He has one of the top Percheron mare hitches in the country.”

Whether not he is competing against his brother, the six-horse hitch classes remain one of Honsberger’s favorites to drive.

“The six-horse hitch is my favorite,” he said. “The size and the amount of power that you are sitting behind is great, but you can still maximize their performance.

“An eight-horse hitch is definitely thrilling when everything is going right but a lot of things can go wrong, and it is not fun sitting behind an eight when things are going wrong.

“When you do drive an eight and everything is going right there is no bigger thrill, but you usually aren’t able to hang on to eight and maximize their performance; you usually can’t hang on to them that long.”

Though Honsberger enjoys the power and thrill of six- and eight-horse hitches the unicorn where one horse is hitched in front of a team remains a favorite as well.

“My second favorite behind the six is the unicorn,” he said. “I’ve just been blessed in my professional career, and even when we had our own, we always had one pretty good lead horse. It is a way to showcase your lead horse, and it is a little more challenging to drive than a four horse. A lot of things can happen.”

As a professional driver, Honsberger’s days away from horse shows are spent feeding and caring for the horses as well as training them for their performances at horse shows.

“A typical day starts between 7 and 8 o’clock and ends between 5:30 and 7 p.m.,” he said. “At the farm, I’m by myself, but we do have show help and summer help starting in May. Cody Woodbury comes for three or four days a week to help drive horses.

“If I’m by myself, I mainly hook teams. Whenever Cody is there, that is when we hook multiples. Between the two of us we can hook the six.”

The horses are worked four to five days a week from April through November to keep them fit and show ready. With three four-year-olds, three twelve-year-olds and a couple of horses in the middle, it is a challenge to coordinate a fitness and training program to meet the needs of each horse.

“The challenge is getting them physically ready endurance wise and muscle wise, but you are battling getting injuries,” he said. “Being that we have such big horses in the draft horse breed, you are fighting joint arthritis and ring bone especially if you are using older horses. Then you are trying to balance the amount of exercise to keep them going without putting too much wear and tear on them to where they are sore and aren’t able to be used.”

The age range of the horses in the hitch is a big part of the plan to keep the hitch competitive year after year.

“Hopefully we can get a few more years out of those 12 year olds,” he said. “They might not be used as extensively as they have been in the past four or five years but they will still be in the plans to mentor the young horses.

“We plan to constantly bring in new talent hoping they will pan out and in time replace the older horses. You are constantly overhauling the hitch piece by piece instead of doing a whole overhaul because then you go through a lot of years of not so good results.”

By constantly upgrading members of the hitch rather than replacing the entire group of horses with new younger stock, Honsberger has been able to keep the Hammersmith hitch competitive through the years.

One of the highlights of Honsberger’s career with the Hammersmith Belgians was in 2008.

“Back in 2008 at the North American Belgian Championships, we had the champion gelding six-horse hitch,” he said.

“That was the first time somebody had beaten Pareos Belgians,” he said. “They had won the six previous Belgian National Championships. We were the first ones to beat them in six years.“

As a native Buckeye and graduate of Ohio State, Jason is also proud of the year he performed Script Ohio with a six-horse hitch.

“In 1989, when I was driving my family’s hitch, they had a musical driving competition at the Michigan Great Lakes International, and I wrote script Ohio with the horses,” he said.

Yes, believe or not, Honsberger drove a six-hitch to a recording of the OSU marching band and wrote out Script Ohio in the arena sand.

“You could actually see the Ohio from the wagon tracks,” he said with a grin.

So whether his is driving, Belgians, Percherons or Clydesdales, or writing Script Ohio in the sand with a hitch of horse, it is clear that this Ohio native still enjoys his career in the draft horse industry.