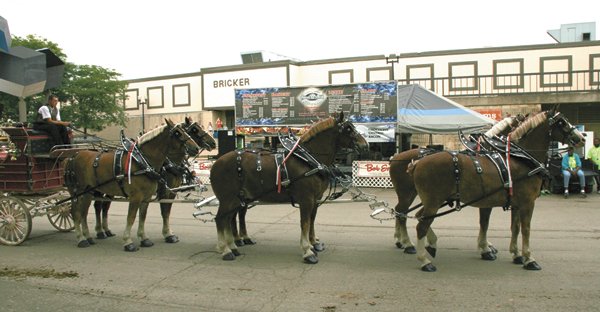 The Hammersmith Belgian hitch waited for its turn to show in the arena at the 2013 Ohio State Fair.

Craig and Chris Hammersmith of Defiance weren’t always interested in draft horses. In the late 1970s and early 1980s, the Hammersmiths resided in Vermont where they owned a logging operation. They didn’t own any horses at the time and had no plans to change their situation.

“I had a skidder and bull dozer, and I was commercially logging,” Craig said.

But Vermont is full of sugar woods and an irresistible opportunity to expand the logging business in a new direction was presented to Craig.

“A friend of mine was president of the Vermont Maple Syrup Association had 3,000 acres of sugar wood with roads in it and everything,” Craig said. “It had beautiful saw logs in it. He said, ‘Hammer if somebody had a pair of horses I’d just about give them those logs.’”

Though Craig had no previous experience owning or working with horses, he was never one to turn down a challenge so he and a buddy decided to try their hand at logging with horses. With few quality horses available nearby, Craig was forced to take a road trip to Canada.

“Monday morning I was in Quebec at a guy’s house that had over 200 horses in his barn,” Craig said. “I told him I had $1,500 and I need a pair of horses and harness and quick instructions on how to drive them because I didn’t have a clue. I had never driven a horse in my life.”

After a quick lesson on harnessing and driving, Craig returned to Vermont with two horses and started logging with them immediately.

“They were both pulling horses,” he said. “They were renegades. If you just kept them working all day long they didn’t have time to do anything stupid. They were good broke, but they were just pulling horses.”

Though one horse only had one eye remaining and neither the horses nor Craig were experienced at logging in this manner, the venture turned out to be a success for the Hammersmiths.

“I tell you what, we made some money with that pair of horses,” Craig said.

“In six months, I sold my skidder and my bull dozer and logged with the horses.”

At this point in their lives, the horses weren’t for enjoyment, but were a pertinent part of the Hammersmiths’ business and a way to make a living. It wasn’t until Craig and Chris moved to Ohio in the mid-1980s to help Craig’s father run the family business, Defiance Truck Sales and Service, that the couple took an interest in showing horses.

“When we moved to Ohio, that’s when we started buying better horses and started showing at county fairs,” Craig said.

When the Hammersmiths weren’t busy running a trucking business, they attended community affairs like parades, fairs, and Boy and Girl Scout events. They also decided to once again put their horses to work in the woods.

“We hauled out all the interior lumber for our house,” Chris said.

In the midst of decorating their new house with lumber hauled from their woods by their horses, the Hammersmiths continued to grow and improve their horse hobby. By about 1998, they owned their own 6-horse hitch.

“We had up to 40 horses then, and we had a bunch of beef cattle,” Chris said. “We downsized all of that, and we went to trying to put together a good hitch. That was quite an education.”

During that time period, every night when he arrived home from work, six horses hitched to a wagon would be waiting for him.

“Craig would come home from work and drive,” Chris said. “We did that every night with the six, but it didn’t take us too long to decide that we weren’t ever good enough to win. So then we started looking for a driver.”

Jason Honsberger is the current manager of their Belgians. He has worked for the Hammersmiths since 2004. Cody Woodbury is serving as an extra driver and crewman this year. Steve Wickersham is also assisting at shows. “I’ve got the best guys in the industry working for me,” Craig said.

Good help is important when travelling to eight to 10 shows a year.

“We’ve had an awful lot of fun,” Chris said. “We’ve been as far west as Denver.”

In addition, to Honsberger and a crewperson or two, the Hammersmiths’ 12-year-old granddaughter, Oakely Demar, travels to most shows with them as well. She has enjoyed being around the horses since she was two or three, and now helps ready the team for their classes and shows in the junior division.

“She’s been driving since they’d let her drive,” Chris said. “She’s a much better driver than me.”

Their many years of experience showing has allowed the Hammersmiths and their crew to become a well-organized and efficient team. Everyone knows their job and how to do it so hitching even a six-hitch is not an overly time-consuming affair.

“If two people are braiding, we can do it in an hour and no more than an hour,” Chris said. “Everybody knows their job. Organization is what it is.”

This team of humans and horses is award-winning in addition to being well organized. Hammersmith Belgians have had two horses on the Dream Team at past North American Belgian Championships and have had multiple invitations to the North American Six-Horse Hitch Classic Series Finals. These prestigious awards and invitations are in addition to the countless other state fair and draft horse show awards they have won.

Needless to say, the Hammersmiths have come a long way from starting out with a pair of renegade horses in the sugar woods of Vermont. 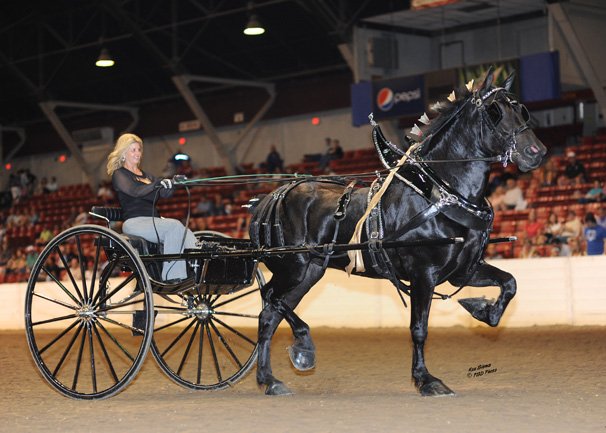 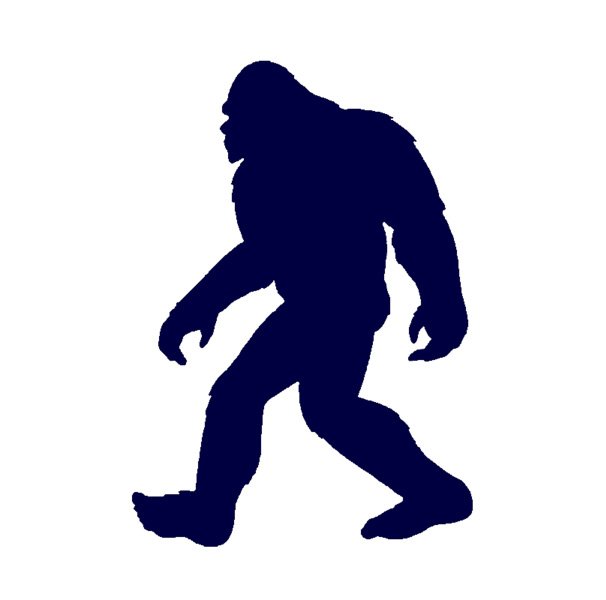 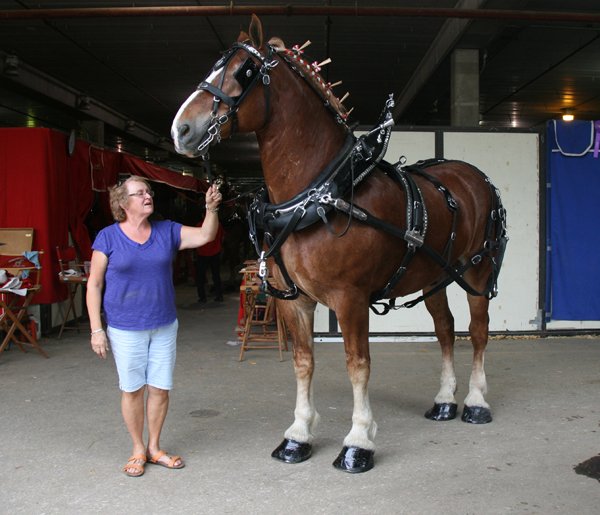 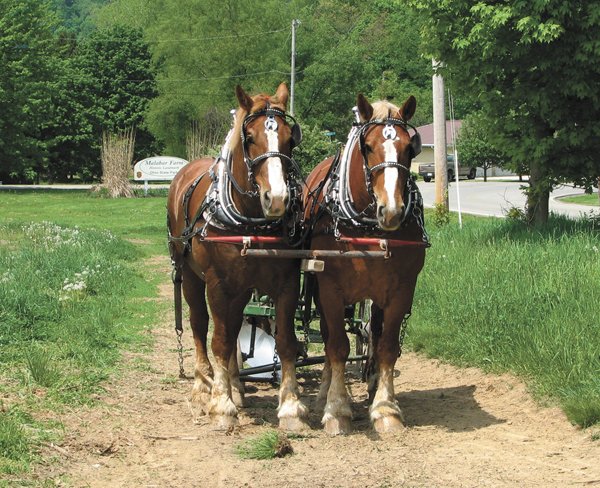