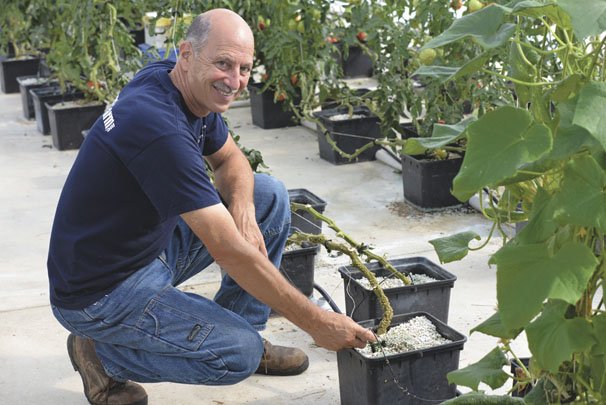 Craig Sirna shows how water is injected into tomatoes in his hydroponic greenhouse.

Sirna’s Farm: Educating one customer at a time

When a customer pulls in to Craig Sirna’s market on Rt. 44 in Auburn Township, they get his attention.

“If someone walks in and takes a look around quickly and heads back out, I take it personally,” he said.  “I’ll chase after them and ask them what we could do or what they couldn’t find. Sometimes they’re after a specific item that we actually have, but just don’t have out in the store right then. So I’ll go pick it fresh for them.”

Such is life at Sirna’s Farm Inc. The family-owned market operates seven days a week from June 1 through the end of October, and is also open for one week during Thanksgiving. In addition to the store, the Sirnas also participate in local farmer’s markets in Aurora, Chagrin Falls, Crocker Park, Middlefield and South Russell weekly.

“We try to give our customers a positive experience, and second, we try to educate them about locally grown foods and the difference between a small local grower and the big stores,” Sirna said.

The market was an outgrowth of the Sirna’s move to the country.

“We lived in Solon, and I just got tired of all the traffic,” Sirna said. “I was driving by looking at property, and I saw the owner of this farm mowing grass. I asked her if she would consider selling the farm, and she told me she had just sold it to a developer. I went to the developer and actually paid a higher price to preserve it as a farm. I guess you could say I was doing a land trust on my own.”

“My mom always had a garden, even when we lived in Solon, but she had an even bigger one when we first moved here. We decided to set up a little tent and sell our extra produce that summer,” said the Sirna’s daughter, Kaitlyn. “It worked out pretty well, until the wind would kick up from the West and blow our tent over.”

By 2000, the Sirnas had torn down a garage to make way for a permanent store.

“We have two stalls and overhead garage doors behind the store, and the idea was to keep vehicles in there — but that only lasted one year. Things at the market really took off,” Sirna said

The family enlisted the help of the Ohio State University Extension Service and participated in the Master Gardner program, as well as took classes to expand their skills and capabilities.

“We should have named this the ‘Learning Curve Farm,’ because we’re constantly learning new things and trying to find new ways to do things,” Sirna said.

Over the years, the Sirnas have developed four growing methods for their vegetables.

In the hydroponic shed, a Dutch system called Bato buckets are used. The buckets use an irrigation system that injects water into the pots eight times per day for two-minute intervals, he said.

“The additional systems really saved us this year,” Sirna said. “We had so much rain that our field crops were bad, but it was the best year we’ve ever had with our hydroponic and cold season high tunnels.”

The Sirnas produce about 80% of the products offered in their store, with the rest coming from local vendors.

“We really believe in supporting local growers,” Sirna said. “We were surprised to learn how many local growers and producers are in our area, and we really test out the items we sell before putting them in our market.”

About 97% of the store’s products are produced in Ohio, and most within a 25-mile radius of the farm in Auburn Township.

“We have our own peanut butter and almond butter, coffee, nuts, granola, even soaps and citronella bug spray,” Sirna said.

In addition to tomatoes, the Sirnas are known for their sweet corn, as well as cucumbers, cantaloupe, Swiss chard, kale, spinach, beets and herbs. Even sugar maple syrup is tapped on the farm by a family friend. Another sweet treat at Sirna’s Farm is the strawberries.

“We have ever-bearing strawberries, that start in mid-June and produce for us weekly and they’re very good,” Kaitlyn said.

Ohio wines are another important part of the Sirna’s Farm product array.

“We have the largest selection of Ohio wines in the state,” Sirna said. “We asked vineyards all over Ohio what their top three selling wines are, and that’s what we sell, so our customers are getting the best of the best. It’s been very popular.”

Although not certified as an organic farm, the Sirnas practice organic methods.

“We don’t use any pesticides, and instead we use beneficial insects like ladybugs and parasitic wasps,” Sirna said. “We also incorporated nematodes into the water system in the cold season house, and our took losses from 80% to 20% due to pests there.”

On the production side, tillage has been the biggest concern this year for Sirna.

“We had so much rain this year that the soil got very compacted. We plan to do some tillage turn-ups to get better drainage,” he said.

“We supply ground beef to the Winking Lizard chain, and we’re actually going to double our herd next year to meet demand,” Sirna said.

The Sirnas are involved in a number of organizations in the community and around Ohio. They participate in the Ohio Proud program and are members of the Ohio Produce Growers Association, and the Ohio Ecological Food and Farm Association. Craig Sirna serves as a board member on the local Farm Bureau chapter.

In addition, Sirna’s Farm provides food to the Bainbridge Food Pantry, as well as provides food, clothing and assistance to the Geauga WomenSafe shelter.

Aside from education, community outreach and working with local growers, marketing Sirna’s Farm is never far from Craig Sirna’s mind.

In addition to participating in farmer’s markets, the Sirnas also operate a Community Supported Agriculture program, which Kaitlyn manages. Through the program, customers pay an up front fee for a small portion of the farm’s production throughout the growing season.

“We do a weekly newsletter explaining what is in that week’s box, what’s happening at the farm and what will be coming up, and we also provide recipes that go with that week’s items,” she said.

Sirna’s Farm has a website as well as a Facebook page, and is active on Linked In as well.

“We’ve been successful in advertising in the ‘Cleveland Plain Dealer,’ and lately we’re focusing more on the Akron market,” Sirna said. “Our customers come from all over, and the challenge for us has been determining where we get the best return on the marketing investment.”

The Sirnas also hold monthly raffles to collect email addresses for their mailing list. Kaitlyn, who recently graduated from DePaul University with a major in English and minor in philosophy, heads the social media efforts.

The farm’s Fall Festival, which will take place October 6 to 7 and 12 to 13, offers an additional event to promote the farm and educate customers about locally grown food.

“It’s an inexpensive way for families to visit the farm,” Sirna said. “We have a sandbox full of corn kernels, hay rides, a bucking barrel, face painting and an obstacle course through the corn. We also use it as a learning tool to help families understand where their food comes from and how important locally grown food really is.”

The fun atmosphere also carried over to Sirna’s Farm’s displays at the farmer’s markets the family attends. “

We always have balloons and we give away a lot of produce,” Sirna said. “We’re the party tent. We want people to have a positive experience, but we also try to educate them about their food.”

To learn more about Sirna’s Farm Inc., visit www.sirnasfarm.com or visit their page on Facebook. 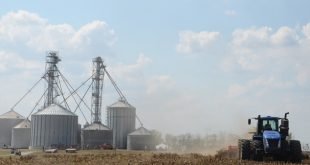