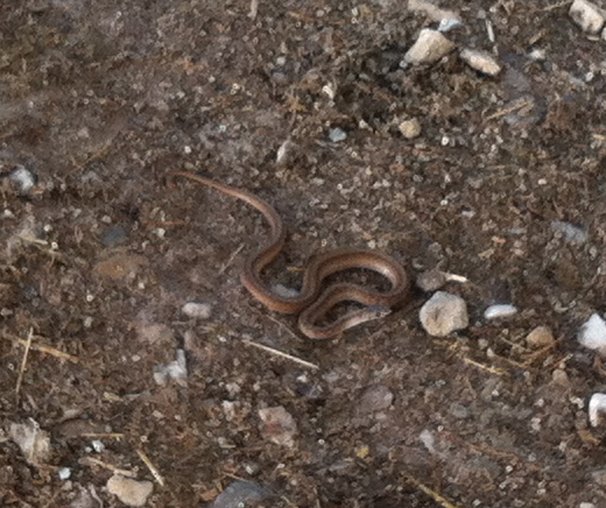 I was having a pretty good day. I was interviewing a possible horse sitter, and I was excited because she seemed to like the horses and has the time to feed for me several times a month. Although this young woman was an adult with a full-time job, she still seemed happy about helping me with occasional feedings.

We were on our way back to the barn from the house and about finished up when I noticed a snake literally under my feet. I started screaming and dancing around to get away from the snake — not exactly a great impression to leave on a potential new helper.

I tried calling my husband several times to help with snake extermination, but he didn’t answer his phone. The young woman declared that she couldn’t walk by the snake as it was in a narrow aisle, and I just didn’t think I could kill it while both she and the snake were watching me.

I finally threw a bucket at the snake and managed to cover it, and my helper ran past the snake contained under the bucket. We finished our talk about the care of the horses, and then the young woman got in her car to leave. My husband was still not answering his phone so I decided I had to kill the snake myself. I couldn’t bring myself to get close enough to chop its head off so I decided to smash it.

Smashing the snake proved to be harder than I thought. It wasn’t dying, and it was making its way toward me at a rapid pace. I started screaming again, and then I heard laughter behind me. The young woman had climbed in her car, but had rolled the window down to watch. She was laughing but in an alarmed voice asked, “Is it really not dead?”

I finally managed to kill and dispose of the snake, but it was a pretty major ordeal for the snake and I. I plan to add a long handled hoe to my tools in the barn for possible future snake extermination. I would like to make the process more humane for both the snake and me in the future.

I know most folks think that snakes play an important role in the environment, but I have declared war on them. If I see a snake on my property, its life will come to an abrupt end.

Luckily, my helper doesn’t seem to be scarred for life or too afraid of me. She might think I’m crazy, but she has continued to feed the horses as needed, although I bet she keeps a watchful eye on the ground for slithering enemies.

As for my husband, I’m think maybe he was using his caller I.D. to its full advantage because although he acted surprised that I had a run-in with a snake (I find it hard to believe he couldn’t hear the screaming from the house) he didn’t seem too excited about being on call for future snake exterminations either.