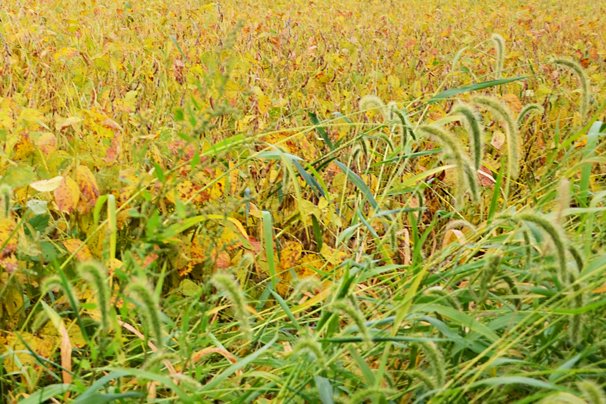 It seems that fields with weed problems are more of the exception rather than the rule this growing season. Herbicide resistant weeds are also a growing problem.

To address the issue, some farmers are stepping up their weed control efforts to try and stay ahead of the problem.

“I think we have some weed issues, with marestail being No. 1,” said Doug Longfellow, who farms in Darke County. “Even though we had really good control early, I am looking across 15 acres of beans right now and I can see a couple dozen marestail plants that escaped. It looked good through summer until the soybeans started dying and these marestail started to emerge. We still have work to do, even though I thought we had a good program. I think the solution is going to be part cover crop and part a double application of 2,4-D in the fall and the spring. The marestail is a result of our no-till system. We are going to have to get pretty aggressive on weed control.”

Some farmers are alternating Liberty and glyphosate systems to get the edge on weeds; some are stepping up herbicide applications both in the fall and the spring to get on top of tough to control weeds.

“Resistance is playing a role and it will take doing something other than going out and spraying Roundup,” Longfellow said.

“In our research, herbicides seem to be effective for control of winter annuals and biennials well into December. The rate of plant death can slow considerably, but this is not a problem since weeds just have to die by early spring. Control of perennials typically declines in late November or early December though, depending upon weather,” Loux wrote in a CORN Newsletter article. “We consider the fall herbicide application to be an essential component of an effective marestail management program, although fall is not where the majority of the money should be spent on managing this weed. Even where the herbicides lack residual, the fall treatment seems to enable more effective control of marestail the following season. For most other weeds, a field that appears fairly weed free following corn or soybean harvest may not require fall treatment.

Loux suggests a core group of herbicide treatments that make sense to use in the fall based on their effectiveness and cost. All of these use 2,4-D as base and. 0.5 pound per acre is enough to control small marestail in fall, but 2,4-D along will not be adequate in most fields when considering this entire we population.

Here are his suggestions:

Glyphosate + 2,4-D can be used in the fall prior to any spring crop. It is the most effective of the treatments shown here on grasses, biennials, and perennials. The combination of 0.38-pound acid equivalent per acre of glyphosate plus 0.5 pound 2,4-D ester is effective for most winter annuals, and rates of both herbicides can be increased for perennials and biennials or large weeds.

2,4-D + dicamba (premixes include Weedmaster, Brash, etc) can be used prior to corn or soybeans. This combination controls most broadleaf weeds, but is not as effective as glyphosate-based treatments on dandelion or Canada thistle. In OSU research, application of dicamba alone has not typically provided adequate control when applied in November, but the combination of the two herbicides seems to work.

Canopy/Cloak EX or DF + 2,4-D can be used prior to soybeans. The only one of the treatments listed here that provides residual control into the following spring/early summer. The lower labeled rates of Canopy are adequate for control of emerged winter annual weeds. Canopy DF may not adequately control chickweed unless mixed with glyphosate, metribuzin, or Express. Canopy treatments have been the most effective for control of dandelion.

Metribuzin + 2,4-D can be used prior to corn or soybeans. This mixture controls winter annual weeds only.  The metribuzin can provide some residual weed control into later fall, but residual control does not persist into the spring.

Basis Blend + 2,4-D can be used prior to corn, and also prior to soybeans north or south of I-70 at rates up to 0.825 or 1.25 ounces per acre, respectively. This combination is effective on winter annuals and dandelion, with some activity on biennials.

Simazine + 2,4-D can be used prior to corn. It controls winter annuals only. While simazine is a fairly persistent herbicide, it provides little residual control into the spring.

Express + 2,4-D can be used prior to corn or soybeans. Controls winter annual weeds and dandelion, but less effective than Basis or Canopy treatments on the latter.

Loux offers a few additional points as well in the article:

1.  Speed of plant death is not essential, so avoid spending money on products that result in faster activity without contributing much to control.

2.  Chlorimuron (Canopy) is the only residual herbicide that provides substantial residual control into the spring, and only for weeds that are not ALS-resistant.  While we occasionally observe a small amount of residual control into spring from Valor or cloransulam (FirstRate), these and other residual herbicides should be applied in the spring where they have substantial utility. It’s largely a waste of money to apply them in the fall.

3. Fields treated before mid-October might benefit from the addition of a low rate of metribuzin or Canopy to extend residual control later into fall, but this is largely unnecessary for later treatments.

4.  The bulk of the money spent on weed control should be used in the spring/summer, not the fall. In other words, fall treatments should not substitute for a comprehensive, in-season herbicide program.