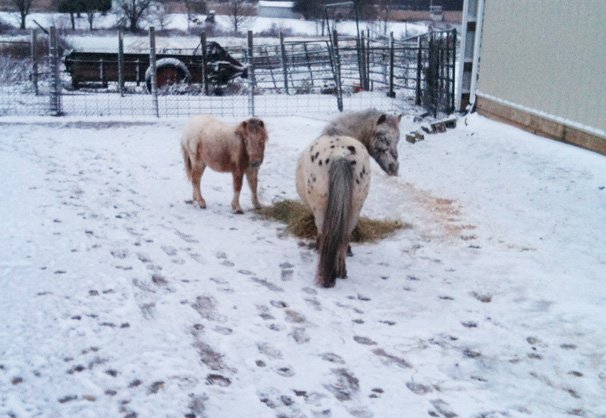 This snow in early November didn't seem to bother the horses, but it depressed me.

Is this February or November?

Though some Ohioans received snow in late October, a more widespread snowfall hit the state last week. This early-November snowfall was the first snow I received this season.

Although I had heard reports of expected snow, I was surprised to wake up to not only about an inch of snow, but also a thin layer of ice beneath the snow. I had to break ice off of latches to gain entry into the barn, and once inside, I found a barn full of frozen water buckets. I had to be dreaming. The forecast has more very cold temperatures late this week and early next week. This was November right?

The next morning, the thin layer of snow was still on the ground and the water buckets in the barn were nearly frozen solid. I couldn’t believe this was happening. I usually don’t have to worry about using heated water buckets (which I know I’m very lucky to own) until Mid-December.

I’m not dreaming or having a nightmare after all; it seems that even if the unseasonably cold temperatures last only a couple of days they do return a few days later. Make sure you take advantage of the days when the high temperature is above the 30s and start winter-proofing your barns because no matter what the date is on the calendar, it appears that winter is here to stay.