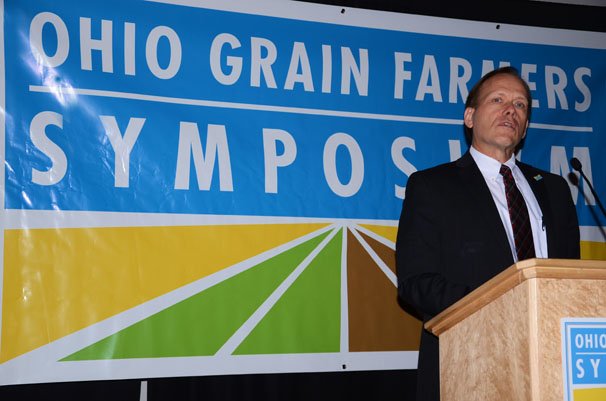 Rick Tolman, with NCGA, talked about the RFS at today's meeting.

Ethanol has enjoyed unprecedented success since the passage of the Renewable Fuels Standard (RFS). With that incredible success comes a growing list of powerful political enemies that has coordinated in a massive attack on corn-based ethanol and the RFS.

“The White House caved to Big Oil in a compromise with to lower requirements. Right now the RFS is not coming into play because ethanol is being brought into the market place due to economics, but lowering the RFS will take away the incentive for higher blends in the future. The Renewable Volume Obligation in the RFS was designed to pressure the oil industry into moving toward higher blends,” said Rick Tolman, with the National Corn Growers Association, at today’s 2013 Ohio Grain Farmers Symposium. “The oil industry has seen 10% of their market go away and they don’t like that. This is important because it has taken away all opportunity for ethanol growth. You need to take this very seriously. This is your future. You need your spouse, your hired man and everyone you know to comment on this to the EPA. If every one of you finds 10 others to comment on this we can win. We need 1,000% of you to tell the EPA about this. Contact your congressmen and senators on this and your governor. I cannot overemphasize how important this is. This year farmers cannot afford to not engage on this. If you don’t all send 10 we will lose. We have a lot of opposition and we need to show that we can get this done.”

Dale Minyo from The Ohio Ag Net sat down with Tolman at the symposium. Here is their conversation.

Along with the recent announcement by the U.S. EPA to lower the ethanol requirements in the RFS, legislation has also been introduced that directly attacks corn-based ethanol. Senators Dianne Feinstein (D-Calif.), Tom Coburn (R-Okla.) and eight cosponsors introduced a bill that would eliminate the corn ethanol mandate within the Renewable Fuel Standard titled the Corn Ethanol Mandate Elimination Act of 2013.

“This attack on corn ethanol and our nation’s farmers would negatively impact the advancement of second generation renewable fuels,” said Martin Barbre, NCGA president. “Furthermore, the actions proposed in this bill would not only decimate rural America but also wreak havoc upon urban air quality as it seeks to remove the ethanol blends which have led to reductions in vehicle-related pollution and improved the air near our nation’s population centers. These same consumers would be deprived consumers of the nearly dollar per gallon in fuel savings ethanol offers and would not reduce grocery bills as food costs, in large part, do not correlate with the price of corn.”

Cosponsors of the bill are Richard Burr (R-N.C.), Susan Collins (R-Maine), Bob Corker, (R-Tenn.), Kay Hagan (D-N.C.), Jeff Flake (R-Ariz.), Joe Manchin (D-W.Va.), Jim Risch (R-Idaho) and Patrick Toomey (R-Pa.). Along with the oil industry, many involved with agriculture are lining up against the RFS after the long stretch of high feeds costs that have hindered livestock and poultry profits.

“We commend Senators Feinstein, Coburn and Hagan for legislation that goes directly at the heart of the problem now acknowledged with the Renewable Fuels Standard,” said Joel Brandenberger, National Turkey Federation President. “Corn is a major part of poultry production costs. Government’s forced competition between corn for ethanol and corn for animal feed occurs without regard for when there is a bad harvest. The resulting volatility in corn prices hits hard, but then recedes slowly. Turkeys are being fed off last season’s purchase of high-priced corn, and those costs linger well after the lower-priced corn harvest available now.”

Corn, soybean and wheat farmers from around the state who gathered at today’s Symposium in Columbus had the chance to submit comments to the EPA and will be working in the coming weeks to inform others about the importance of maintaining a strong, and dependable, RFS for the future.