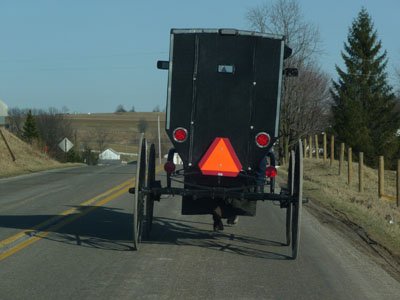 My husband, Mark, and I planned an overnight trip to Berlin in early January. We’re really not huge Amish Country fans (we have Amish friends at home), but we like to get away without being too far away. We spent most of our time in nearby cities, shopping or eating at restaurants.

On a Saturday evening after dark, we were traveling back to our room in Berlin at 50 or 55 mph (the speed limit) on a state route and we were still more than 20 miles away from Berlin when out of nowhere two tiny red lights appeared out of the darkness. I started screaming at Mark to slow down — he still hadn’t seen the red reflectors.

I wasn’t really sure what was ahead of us, but I was afraid it might be something with red eyes. No matter what it was I didn’t want to it hit it. We didn’t think we were in an Amish neighborhood as there weren’t any signs posted about watching out for buggies, so we were quite surprised when the red eyes turned out to be red reflectors on the back of an Amish buggy. We immediately put on our hazard lights to alert other drivers because to complicate matters further, the buggy had no lights on the back — just the red reflectors.

Oncoming drivers had more notice about the presence of the buggy, because it did have headlights, but we couldn’t see those from behind. We were used to the buggies closer to Berlin which had flashing lights on the back, head lights on the front and some even had lights with a blue tint on the top. Mark thought the first one we spotted with blue lights was a police car. This was the first of several buggies with no rear lighting that we passed that evening.

The moral of the story is to stay on your toes no matter where you are traveling. Let’s keep everyone safe and share the road.