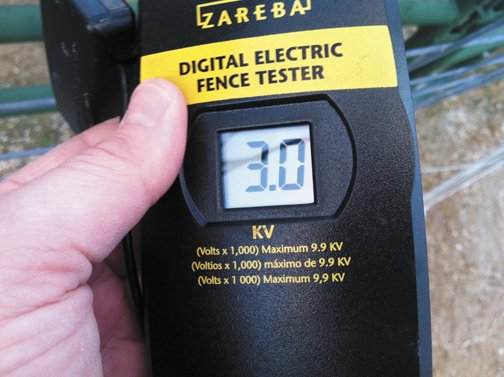 For my horses, I find that if my digital tester reads around 3.0., the horses stay away from the fence. I have accidentally touched the fence when it was tested at around the 3.0 level, and I can tell you that it gives out quite a zap.

I have quite a bit of electric fence in use around my barn. I have pastures that are constructed of purely electric fences as well as some dry lots that are composed of traditional livestock fencing types that are bordered with electric wire. I have found it necessary to keep nearly 80% of all my fencing electrified in some way to keep my fence and my horses safe.

Last spring, my bred mare was pastured in a lot with traditional livestock fencing that was not electrified. She had an itch she couldn’t reach that needed scratching, and she used the fence to scratch the itch and proceeded to injure herself. The massive amount of blood involved, along with the location of her injury caused some unnecessary stress and excitement until a thorough inspection was done.

Once the mare’s injury was dealt with, I immediately added electric wire to her lot to ensure no other horses tried to use the fence to scratch unreachable parts.

Until this past summer, I didn’t own a fence tester. I was pretty much able to tell when the fence wasn’t working because my bay minis surprised me several mornings in a row by destroying the electric fencing system I had installed to keep them off of the permanent fencing in their quarters.

I thought I had the problem fixed until my neighbor and I witnessed my draft mare playing with the polywire by grabbing it with her teeth! There was no way that wire was electrified.

We spent a solid half hour investigating the issue and finally found the problem with the fence. My mare soon got the message with a zap to her mouth that didn’t hurt her but surprised her enough to keep her off of the fence and from pestering her mini horse neighbors for months to come.

I added another pasture this summer and I decided to invest in a digital fence tester so that I would know not only if the fence was working but also how well it was working. I like to have my horses get a good zap right from the beginning if they think they are going to test the fence. I don’t want a minor shock to encourage them to test the fence again later.

I thought I had everything all worked out because between testing the fence with the tester and accidently testing it a time or two with my own flesh, I was certain it was working. I started feeling like I was winning the fence war. Apparently, I had only won the battle because, as the weather turned colder, I began arriving at the barn to find sections of electric fence torn down inside the mini horse pen. It seemed the boys were bored and making a game of tearing the fence down.

After several unsuccessful attempts, I was finally able to find the elusive dysfunctional part of the fence and fix it, but sometimes it can be nearly impossible to find the problem.

Here are a few tips I learned from a couple decades of working with electric fence. Hopefully they will help minimize your own frustrations if you have electric fence on your property.

Invest in a fence tester

Unless you are brave enough to test the fence with your own flesh, you probably need a fence tester. I prefer the digital kind because you can read it even in the brightest sunlight (unlike the flashing light testers). You also get a numbered reading so you know exactly how much charge your fence contains.

Daily testing is best but probably not always practical. Wildlife, especially deer, can destroy electric fence over night by mistakenly running through it. Unless you check your fence before turning your horses out, you won’t know the fence is not operating correctly until you see your horse frolicking in your yard instead of the pasture where he is supposed to be.

I use a variety of posts, insulators and fence types on my property. I find it handy to have extra wire, insulators and posts on hand. You never know when a weather, wildlife or even horse event could take out a large section of your fence. It is important to have supplies on hand to fix the fence immediately, especially if the electric fence is your only means of confining your horses.

I’m a big believer in caps for the top of metal fence posts. I have heard more than one story from friends about their horses playing and ending up embedding themselves in a metal post. In the best scenarios, the horses required long-term medical care. In the worse cases, the result was death of the horse. Cap the posts!

Fence failures can be frustrating because sometimes it seems impossible to find the place where the fence is grounded out. Last fall, I couldn’t find my problem and it turned out my husband had closed an electric fence pasture gate after running a tractor through it and had re-latched the gate to the wrong place and had grounded out the fence. Make sure all gates are closed and latched properly.

Watch out next to metal fencing or buildings

If you have fence next to a building or metal fence, make sure it isn’t touching something metal. I electrify almost all fences at my place. Even traditional fencing systems that do not require electrification contain insulators and electric wire to keep the horses off the fencing to protect the fencing and the horses. Sometimes the wind or horseplay can inadvertently cause the wire to touch a metal building or fence and ground out the electric wire. Check places where the electric wire and metal come close together often to make sure there are no malfunctions.

Electric fence is a relatively maintenance free and inexpensive fence. Take your time making repairs and check the fence’s voltage often. Just remember it is easier than constantly replacing chewed or knocked down wooden fence rails on a regular basis.

As for me, I’m sure the “war” is far from over. I’ll continue to fix my fence, and the horses will continue to try to find ways to outsmart it and me, but if I use my digital fence tester often, hopefully I can keep injuries, destruction and loose horses to a minimum.