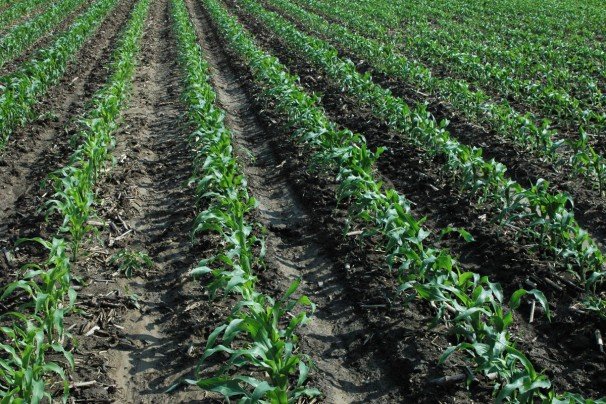 Starter fertilizer in corn production has traditionally been recommended for fields with cool soil temperatures, including exceptionally early planted or no-till fields, or those with high residue cover. In cool soil conditions, starter fertilizer placed near the developing seed provides easily accessible nutrients until soil conditions improve and an adequate root system is established. Starter fertilizer has also been recommended for fields with low phosphorus levels, and research studies have proven the value of this practice. However, some growers seeking to exploit grain price opportunities are evaluating whether starter fertilizer can play a more prominent role in increasing corn yields.

Starter fertilizer is defined as small amounts of plant nutrients — nitrogen (N), phosphorus (P) and potassium (K) — placed in close proximity to the seed, usually at planting.  Placement can be directly below, to the side, or to the side and below the seed. Growers sometimes consider broadcast or liquid fertilizer application to the soil surface as “starter”; however, these should not be included because nutrient placement is positionally unavailable to early seedling growth. To be a “starter,” nutrients must be strategically positioned to enhance early seedling vigor and development.

Starter fertilizer placed in contact with the seed (“pop-up” fertilizer) is another option, but its use requires a great deal of caution to avoid possible germination and seedling injury. The amount of pop-up that can safely be applied is limited and depends on the fertilizer used and soil properties. For example, starter fertilizer containing ammonium thiosulfate or urea ammonium nitrate (UAN) should not be placed in contact with the seed.

A starter fertilizer is usually composed of two or more nutrients. Under most situations, a combination of nitrogen and phosphorus constitutes an effective starter material. Liquid 10-34-0 and dry 18-46-0 are common starter fertilizer materials. Liquid 7-21-7 and dry 8-32-16 are also commonly used. Other fertilizer formulations may be used as starters. For example, the addition of zinc and/or sulfur may be warranted in sandy, low organic matter soils.

The rate at which a starter fertilizer can be applied depends upon the salt content or index of the fertilizer, proximity of starter to the seed and soil texture. Salt index is a function of the sum of the nitrogen, potassium and sulfur amounts present in the fertilizer. Products like ammonium polyphosphate (10-34-0) have a low salt index value (2.28 pounds per gallon), while ammonium thiosulfate (12-0-0-26) possesses a high salt index value (30.9 pounds per gallon). Salt damage is most pronounced when soil moisture is low, so adequate soil moisture at planting or rainfall after helps minimize salt injury. To diminish the probability of salt injury, avoid over-applying nitrogen, potassium or sulfur fertilizers close to the seed.

In summary, corn yield increases from starter fertilizer applications are most likely to occur:

Higher corn prices and changes in farming practices (i.e., earlier planting) may create new roles for starter fertilizers beyond their traditional applications. One such role may be insurance against prolonged, unfavorable weather conditions occurring soon after planting. Growers and agronomists are encouraged to continue testing starter fertilizer in a variety of situations to further determine when and where these treatments may be most responsive.