The 2013-2014 Ohio Cattlemen’s Association (OCA) BEST (Beef Exhibitor Show Total) Program wrapped up on May 10 with its annual awards banquet held at the Ohio Expo Center in Columbus.

“The banquet is a time to celebrate the many achievements of our BEST participants, both in and out of the show ring,” says Stephanie Sindel, BEST coordinator. “Each participant is recognized for their hard work by family, friends and BEST supporters alike.”

This year’s BEST program featured 17 sanctioned shows that weaved its way across the state with 380 youth participants showing 537 head of market animals and heifers.

New this year, sponsoring partner Bob Evans initiated a scholarship fund for BEST participants. Bob Evans restaurants at each BEST show locations during the even donated a percentage of sales as part of their community fundraiser program. Janel Gilbert, Darke County, was presented the first BEST/Bob Evans Scholarship in the amount of $250.

Participants in this year’s program received an entry into the drawing for the free use of an 8’ x 26’ Eby Trailer complete with BEST logo detailing for the 2014-2015 BEST season, donated by Eby Trailer. Participants were given an entry for every animal they showed at each show throughout the season equaling more than 3,500 entries. The lucky winner was Luke McKee, Knox County.

Caleb McKee, Knox County, won the drawing for a $500 gift certificate toward the purchase of his next show animal from an OCA member. Winning a Show Pass valued at more than $750 was Hannah Barr, Ashland County. A gas card valued at $100 was won by Kaylee Wilcox, Darke County.

Community Service For the 2013-2014 season. BEST Participants donated time and funds toward two community service projects supporting local youth, Make-A-Wish® and Ronald McDonald House Charities®. In all, BEST youth raised $14,207 for Make-A-Wish. Hannah Weymouth, Clark County, was the top fundraiser for Make-A-Wish® and was awarded with a $500 shopping spree with Weaver Livestock. Participants raising $50 or more were also entered to win a $500 show supply gift certificate. Calvin Trigg, Franklin County, was selected as the drawing winner.

BEST members have collected pop tabs for Ronald McDonald House Charities for the past three years and have donated more than one ton of pop tabs. This year 485 pounds were collected by participants with Ian Gehret of Darke County, collecting the most at more than 130 pounds. He was awarded with a $500 Weaver Livestock show supply shopping spree.

It takes a lot of time and dedication for juniors and their parents to attend any of the BEST shows, but several individuals attended all 17 BEST shows across the state. Thirty-nine BEST participants won a single show pass for the 2014-2015 season and Hannah Weymouth, Clark County, was the winner of the full year show pass drawing.

BEST is a youth program of the OCA that recognizes Ohio’s junior beef exhibitors through a series of shows. Juniors who participate in these sanctioned shows earn points for their placing at each show. The OCA BEST program promotes educating Ohio’s juniors about the beef industry’s issues and rewards the successful accomplishments and hard work of those junior beef producers. 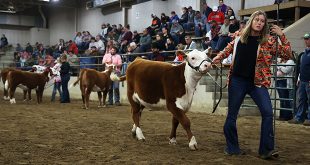 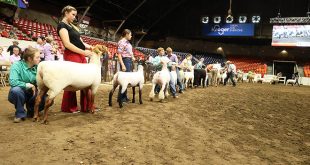