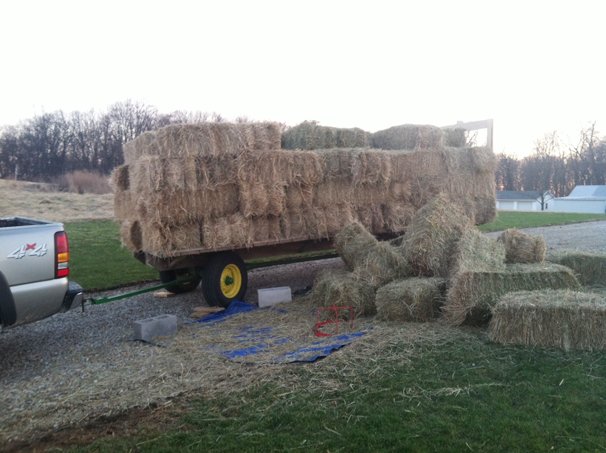 This photo was taken when I realized I was in trouble.

Just where was the voice of reason?

I am one of those people who is always stressed about running out of hay. Several years ago, when hay harvest was delayed until almost July, I nearly ran out of hay, and I vowed at that time that it would never happen again.

Luckily, a friend of mine literally “baled me out.” He saved some good quality horse hay for me. I don’t have much storage for hay at my house so the original plan was for me to just get a pickup truck load or two of hay, but he offered me all 165 bales, and I couldn’t pass up the opportunity to store some more hay for future needs.

The idea to purchase all of the bales was a good one, but I failed to put thought into how to follow through with the purchase. I figured it would be easy to just pull the wagon down next to the barn and throw the bales off and then stack the hay in a stall, but I was wrong, really wrong.

I usually purchase most of my hay in the summer when the ground is hard and dry. I do have a driveway that connects to my barn, but it is narrow and doesn’t have a turn around loop. Having never purchased more than a truck load of hay at a time outside of the summer months, I had failed to plan for the wet and soggy conditions that prevented the wagon from being able to park next to the barn.

The other issue was I had never unloaded a wagon with much more than 110 bales on it and this wagon had 165 on it. Once I realized the wagon was not going to be able to sit next to the barn due to the wet conditions, it was too late to move the wagon as it was so heavy that it and the truck were stuck about half way down the barn. The wagon could have gone farther down the hill toward the barn but that wouldn’t have helped because the truck would have blocked the entrance to the barn. The only option was to unload the wagon where it sat and then wheel-barrow the bales down to the barn for stacking.

To make matters worse, my husband and I had a miscommunication and it quickly became clear that the mess I had made was a mess I was going to have to unload and stack on my own due to a prior commitment he had made. Thankfully a girlfriend of mine came down to help me, but the task was still one that she and I weren’t going to be able to accomplish on my own in a timely manner.

After unloading and stacking the majority of two rows of hay from the wagon, it became clear that I was in trouble. The end of my physical strength was certainly going to be reached before the hay wagon was empty.

Thankfully, I thought to call a friend of mine and he sent over his teenage son to help with the task. With all three of us working together, we were able to unload and stack the hay in a fairly timely fashion.

I’ll never again have a loaded hay wagon delivered outside of the summer season when the ground is dry and hard. I’m very glad to have a stall full of hay, but the task was much harder than normal due to my lack of organization and planning. I was just way too excited about hoarding more hay to think through the entire process.

I had told several of my friends my hay hoarding idea, but nobody thought to point out the flaws in my hay acquisition plan. I have to wonder, just where was the voice of reason?

It certainly was a great life lesson though.