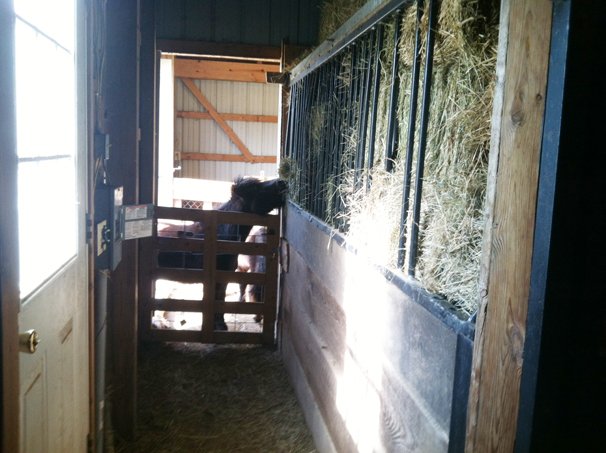 Identifying the hay thief turned out to be pretty easy as he became bolder with his thievery.

When you’ve spent quite a bit of time and effort stacking hay in the barn, it is very frustrating to find part of your hay stack dismantled. Day after day I arrived to find a bunch of hay strung out inside the miniature horse pen.

No matter what I did, I couldn’t seem to stop the hay stack destruction, and I couldn’t figure out how it was happening. One day, I decided to exert a little extra effort into finding my hay thief. I decided to have a stake out in the barn until I was able to determine the identity of the hay thieving bandit.

I sat quietly in the barn for only a few minutes when it became clear that one of my miniature horses was in fact the thief. Apparently he was able to reach farther into the the barn than I had estimated. Whenever he became hungry, he simply walked into the overhang and reached over to the haystack and grabbed himself a few mouthfuls.

Now that the mystery is solved it has become clear that I’ll have to come up with a new system to block this little guy from reaching the hay before I stack it near him next year.