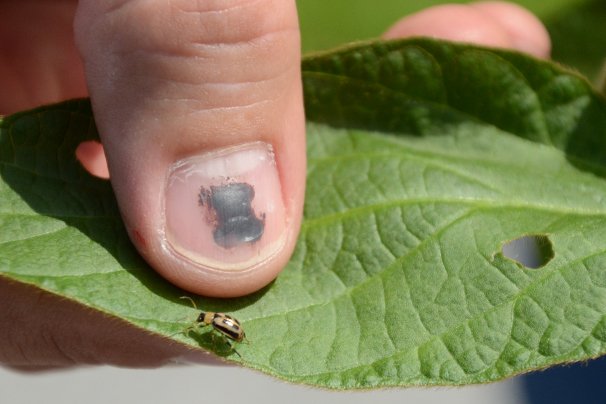 Corn Summary: There appears to be extensive nitrogen deficiency in the field, likely from leaching. There are no weeds and next to no insect or disease pressure. There were some holes and gaps and skips from planter issues. The population was 31,000 to 35,000 with an average of 33,000. The field was in good condition but very clear nitrogen deficiencies that were consistent through much of the field. It seems like there are a number of issues with nitrogen deficiency in the area. yield estimate is 148 bushels per acre.

Soybean Summary: It was a nice clean field but plants are short (around 26 inches) with quite a few two-bean pods. There are signs of too much water early in the season. There are several holes in the stands. Few disease issues with minimal brown spot. There were signs of boron deficiency in what could be the more compacted end rows of the fields. No signs of insects or significant disease problems. Fair to poor yield potential in the field due to short plants, a small average number of beans per pod. There are quite a few fields with healthy looking but very short soybean plants.

Corn Summary: Corn in the area looks good with nice color, better than the Williams County area. It looked like there was enough N to carry it through. The crop is in dough stage and progressing well. It had plenty of moisture. Population of 31,000. There was some ear worm in one of the ears but it was not deep into the cob and not a widespread issue. Some aborted kernels on the tips but nice ears. No apparent disease issues. Yield estimate 220 bushels.

Soybean Summary: Good thick canopy with a high population. No evidence of nutrient deficiencies. Canopy was 36 to 48 inches. Light weed pressure with first node five to six inches up. Minimal brown spot issues. No evidence of insects. Many three bean pods. Yield potential is very good. Nice looking beans in the area with population of 170,000.

Corn Summary: The N supply looked good. There was some Northern Corn Leaf Blight two to three leaves from the top of the plant but not enough to limit yields. There was some tip back but not severe. The husks were tight but there were some ear rot (Fusarium) issues on some of the ears with discolored kernels. The population was around 30,000. Overall excellent corn in the area. Yield estimate 188 bushels.

Soybean Summary: Nice field with 34- to 36-inch canopy height. No disease or insect pressure and good weed control. Population around 180,000. Good to excellent field with many nice looking fields in the area. Healthy looking beans that were green all the way to the ground with many three and four bean pods. Excellent yield potential.

Corn Summary: Corn was low on N but also starting to dent. There was some smut and leaf spot but not severe. No insect pressure. Nice ear set. Best ear we’ve seen so far with best ear fill. Population 26,000. There may have been some planter problems. Yield estimate 178 bushels.

Soybean Summary: Ground was dry but crop was not hurting yet from lack of moisture. Short canopy height of 26 to 28 inches. Shorter beans in general in this area. Some brown spot in places. First field with obvious insect pressure in the form of leaf feeding, but not severe. Weed free, but could use a rain. Big cracks in the ground. Good yield potential, but not excellent.

Corn Summary: Nice looking corn field with no weed pressure. There was some insect feeding and some NCLB in some spots. Also some coon damage that cause limited lodging in spots. There were quite a few double ears and a high population of 34,000. Even with damage, one of the best corn fields so far. Short husks on one ear exposed the tip. Corn in dough stage. Yield estimate 215 bushels.

Soybean Summary: Heaviest insect feeding we have seen so far with Japanese beetle, but still not severe. Nice deep green color and 36 to 38 inches tall. Six to eight inches to first node. Not much disease. Many three and four bean pods. The ground is dry but beans not showing any signs of stress yet. Population of around 180,000. A few marestail but nothing too bad. Very good yield potential here. In the area we have seen increasing amounts of marestail in fields.

Corn Summary: Nice field, some of the best we have seen. Corn in soft dough stage. Ear fill was excellent with no disease or insect issue. Population of 33,500 with nice ears. This was a nice stand with some double ears on the edge. Yield estimate of 220 bushels.

Soybean Summary: Pretty good field in 30-inch rows. Some ares with holes may have been planted pretty wet. Canopy around 31 inches tall with some brown spot and Japanese beetle present. There was some marestail pressure. There was some manganese deficiency as well along the outside. Many three-bean pods. Shorter beans again in the area and marestail pressure seems to be increasing. More moisture at planting in this area resulted in stand issues. Very good yield potential in this field despite challenges.

Corn Summary: Very clean field, though we found a few aphids. No disease (other than limited NCLB) or weed pressure. Very nice stands though there were many small ears and stalks in end rows.  Early dough stage. Corn was shorter in height but had large ears. There were some double ears but second ears were small. There was some minor tip back. Needs rain, without some moisture will pull yields back a bit. Population of around 33,500. Yield estimate at 220 bushels.

Soybean Summary: Nicest field we have seen today and most potential but it needs rain to fill pods. Canopy 36 to 42 inches tall with no disease and some minor insect feeding. Still setting pods on top and many three and four bean pods. We are starting to see more volunteer corn in the area, with some significant problems in fields. Big yield potential here with some timely rain.

Corn Summary: The corn was tall and showed stress from dry conditions, though there was a recent rain. The plants were tall and the field was variable. The population was around 31,000 with some weeds but not bad. No insects or disease issues that we could find. The stress and the variability limit this field with a yield estimate of 160 bushels.

Soybean Summary: There was some frogeye leaf spot. There were signs of insect feeding, possibly from thrips. The ground was damp with a timely rain for these beans. The height was quite variable with 24- to 34- inch tall plants and there were quite a few two- and three-bean pods. The yield potential is good, though, with a generally healthy and clean stand. There were many very clean soybean fields in the area.

Corn Summary: Surprising field of corn. It looked very good and very representative of a region with good growing conditions for the season, but the further you got into the field the worse it looked. This has to be some late planted corn and parts of the field were still pollinating. There was tremendous variation in the field and yields really suffered. There was quite a bit of insect pressure with aphids, western corn root worm, and a weevil. It seems that there were problems with emergence. The population 34,000 with shallow kernel depth. Though there was tremendous variability, the average yield estimate is 132 bushels per acre.

Soybean Summary: This was a very uneven field of soybeans with a range of 32 to 54 inches tall. The stand was good and the beans were podded very well with little insect or disease pressure. Yields should be very good. It seems like they have plenty of moisture and pods are filling well. There were marestail and ragweeds scattered in the field.

Corn Summary: Nice field of corn and good moisture. Wettest field of the day. Dough to late dough stage. Two samples with second ears that contributed possibly 5% or 10 bushels of yield. No diseases or insects. Should have plenty of moisture to finish. Yield estimate is 185 bushels.

Soybean Summary: Another really nice field of beans with good moisture to finish strong. There was some marestail and ragweed. There was a good thick 36-inch tall canopy. Some signs of manganese deficiency in compacted areas of the field. There was some brown spot but not much. There was a significant population of bean leaf beetles. Hopefully the pressure is not enough to limit the very good yield potential of this soybean field.

Corn Summary: Field looked OK with minimal weed pressure. Consistent population, but uneven height and development. There was some N deficiency and likely early ponding that led to uneven stands. There was some tip back. Corn in early dough but variable. There was a 33,500 population with a yield estimate of 165 bushels.

Soybean Summary: Fair soybeans with 27- to 32-inch height and quite a few three-bean pods.  There were early water issues that hurt the stands and left some yellow spots in the field. No disease or insect problems. Yield potential was fair to good depending on rainfall moving forward.

Tar spot in Ohio: What we know and what we’re learning in 2021