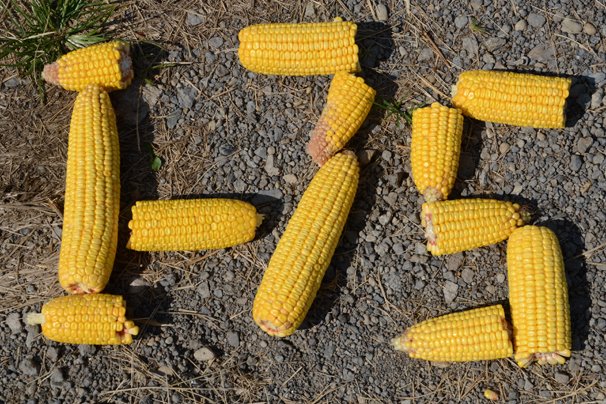 Corn Summary: The corn was in 20-inch rows with little disease or insect pressure. The tips of several ears were not filled out. Field looked pretty dry, but did not look too bad considering the lack of moisture. Population was around 32,000. It looked like there was some variability across the field with a fairly wide yield range and an estimate of 155 bushels per acre for an average.


Soybean Summary: The field looked pretty good, though clear signs of herbicide injury, likely Cobra or FlexStar. The canopy was 30 to 36 inches tall. There was not much obvious disease pressure but hard to tell with herbicide injury. There was some Japanese beetle feeding. There was a thick population with many three-bean pods. Field can still yield well despite the significant injury to the crop with very good yield potential.

Corn Summary: Tough conditions here. There were some emergence issues here. May have run out of N and some potassium and manganese deficiencies and maybe some NCLB. No insect pressure. There were challenges with too much moisture early. Clearly very dry after early wet conditions. Yield estimate 150 bushels.


Soybean Summary: Nice field for limited rainfall in the area. Canopy height was around 36 inches. There was some marestail and volunteer corn with no insects or disease. Thick stand with mainly three bean pods. Needs rain for good yield potential.

Corn Summary: Rough looking field, probably the worst and latest corn we have seen. The corn is just pollinating and running out of N. The population is around 33,000 with hail damage in much of the field. There was not much insect pressure. Ear fill not yet complete so it is hard to get a good handle on yield. The yield estimate is 130 bushels if the field can make it to maturity.


Soybean Summary: This field had the worst insect damage we have seen, though still probably not at threshold. Very uneven with significant weed pressure. Short, with some plants only 20 inches tall, with excessive corn stover in the field and the soil was hard. Soils look to be high in magnesium. This is one of the worst soybean fields we have seen with a widely variable yield potential of poor to good, if the beans can get some more rain.

Corn Summary: Corn looked good — no diseases, no insects, or nutrient deficiencies. Nice ear set. No weed pressure. The population was around 30,000 with yield estimate of 200 bushels per acre.


Soybean Summary: There were a few small spots that had too much water, but otherwise it was a good even stand. There was a 36-inch canopy height. Very clean field with good pod set. There was a small amount of brown stem rot. No insect pressure. Yield potential was very good.

Corn Summary: Very good looking field but there was quite a bit of variability. Population around 33,000. Ears just starting to dent. Some gray leaf spot and NCLB present in fair amounts. Some northern corn root worms.  Some areas of the field had big yields but there were some stunted ears with tip back too. One yield estimate in the field was 270 bushels and the other was 169 bushels for an average estimated yield of 220 bushels.

Soybean Summary: Plants were well podded with little disease pressure. Canopy around 34 inches tall with many three and four bean pods. Some plant size variability maybe due to planting conditions. We did find what appears to be a brown stink bug in the field.

Corn Summary: Field looked good from the road but somewhat disappointing. There was not much disease or insect pressure and ears smaller than expected but pollinated well. Corn almost to dent. Population variable with an average of around 29,000. There were no real issues but yield estimate is 156 bushels.

Soybean Summary: Looked like a great field from the road. Beans were short on knobs in field and in need of some rain. The height was 22 inches to 30 inches. There was some Japanese beetle pressure with an average pod set. There were many two-bean pods and thinner stands than initially appeared. Fair yield potential, maybe a bit better with some timely and much needed rain.

Corn Summary: The corn was filled out pretty well, especially considering the dry conditions. The kernels were coming out of the end of the husks and there was some bird damage on some ears. The population was 31,000. There was good ear fill but not excellent. there was some tip back. There was a very consistent 205-bushel yield estimate in the field.

Soybean Summary: The field looked really good from the road but was disappointing when you got out in it. The beans were short at 32 inches and not a large amount of pods. The ground was dry and in need of some rains. With some rain there could be fair yield potential in this field, but it needs moisture and time.

Corn Summary: Very dry here with corn curling in the heat. The ears are small but filed out well. Slight disease and insect pressure at 26,000 population. Tough conditions for this field with a yield of 132 bushels per acre.

Soybean Summary: The beans were very dry and showed signs of early season ponding and heavy rain. The canopy was 38 inches tall with some brown spot and some manganese deficiency. There were grasshoppers and aphids present in the field, not at threshold levels. Good pod fill of two or three bean pods. Fair yield potential with some rain.

Corn Summary: Dry conditions and corn is pollinating with a long way to go. Small kernels need no frost for a while and rain to make it. No insect pressure with some grey leaf spot and NCLB. There was some ragweed in the field. Tipped back on some ears with quite a bit of variability. With timely rains and a no frost, yield estimate is 175 bushels.

Soybean Summary: Podded all the way to the top with beans in them. For as dry as it was these beans seem pretty good. There were places with water damage from early in the season. Around 36 inches tall. They need some rain but they have pretty good yield potential. Very little disease or insect pressure.

Corn Summary: Corn was furthest along we have seen, dented. Wide rows at 38 inches and population of 23,000. Healthy field with no disease pressure but some weeds. Deer damage in several areas. Yield estimate of 158 bushels.

Soybean Summary: Still dry but better than the surrounding counties. There was a 36-inch canopy with a little volunteer corn. There were some aphids and Japanese beetle and some brown spot. Decent fill of three bean pods with a good population and good yield potential but needs some rain.

Corn Summary: Not necessarily a great looking field but impressive ears. Not many bugs and very little disease. There were a couple of spots where N was running out. It was just starting to dent. Population was 34,000 and a surprisingly consistent 208 bushel yield estimate.

Soybean Summary: The corn was surprisingly good and the soybeans across the road are surprisingly bad. Good looking field from the road but only in the R1 or R2 stages and not a double-crop. It was 22 or 24 inches tall with low amount of pods and flowers. Population was good, but unless we have a really late frost and some rain there is poor yield potential here. 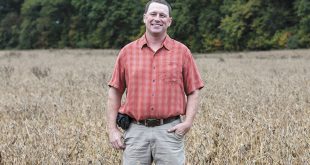 On Nov. 17, the Ohio House of Representatives voted 89 to zero in favor of …