It is hard to believe that this year’s crop tour is coming to a close. Although we wrap things up in Rochester, Minnesota tonight, there are many miles of highways, biways and gravel roads through Iowa to get there.

It seems as though many of the other scouting groups are seeing very impressive numbers out of corn and soybean fields from Ohio, Indiana and Illinois. My routes have not be as great by comparison. Don’t get me wrong, the company I kept all week with old friends and the new friends I have made make this trip for me every year, but you can’t blame a guy for wanting to see a 250 bushel corn field. It something like that is going to happen, it will happen today.

East of Homestead, Iowa is where our first field of the day will be and this is not what you expect in Iowa. The ear count was a measly 77, which brought our yield estimate to 125 bushels. Signs of disease pressure was also noted. The ground was dry on both sides of the road and the beans were also weak coming in at at 773 pod count for a 3 x 3 field. They need rain here.

We have made 2 stops in the past hour and one of those stops was in West Amana, Iowa right next to the Iowa River. This river flooded in the spring, but the corn and soybeans came out of that water alright. Corn in that field is pegged at 201 and soybeans in a 3 x 3 foot square came in at just just 1600.

Our next stop was close to Van Horne, Iowa and we are getting into the part of the state where all you see are fields for miles and miles and miles. This stop had a healthy corn crop, albeit a little dry which explains the tip back beginning to occur. The yield here is guessed at 215 and the soybeans, planted in 30 inch rows with 30 plants 3 feet of row, had a pod count of 1360.

In Clutier, Iowa we sampled a field that had unfortunate wind damage throughout the field. This will, of course, bring our number down a bit. All in all the ear will was solid and the recent rains here will be very beneficial for a nice finish. The soybeans were average, but there were still plenty of flowers and the potential for a higher number in just the next week or two is there. Our corn number was 179.1 and the beans came in at 1008 by our count.

North of La Porte, Iowa we found our most mature corn field of the trip. Fully dented and ears were dropping. Kernel size was very impressive too. The soil here was soft and dark brown so we were anticipating decent yields, but were disappointed with our 175 yield estimate. We have seen some goosenecked stalks due to a recent wind event. The soybeans weren’t any better giving us own worst samples with 752 pods in a 3 x 3 square.

Batter up! East of Waterloo, Iowa we found this baseball bat of an ear with 20 around. Easily would have been a solid mid 200’s if the pop count was normal. It was not. The field was better inside than it looked from the road and our estimate is 195.8 bushels per acre. The soybeans had piles of pods on some of the stalk, but not uniformly. The population was low here too so we had a 714 pod count in a 3 x 3 square for this stop. Rain really coming down now but the area needs it. Grass is burning up.

We’re not quite a mile high, but in Denver, Iowa we found mediocre corn and soybean fields. There were some stalks that didn’t quite make it full maturity and topped out an ear and the ears that did form on a fully developed stalk were less than average. Our estimate is 145 bushels. We found another short bean field in the 700’s here, with some 4 bean pods, and that makes 3 in-a-row.

We are in Frederika, Iowa and our field averages were a bit better for both corn and soybeans. The plant population was high and we could tell this farmer got this field in early, as plants begin to turn and ears start to droop. The kernel size was some of the biggest I have seen thus far. We calculate this yield to be 195. The soybeans were showing signs on disease pressure, so some of the pods that were still coming along may not make it to harvest. We peg these beans at over 1200 pods in a 3 foot square.

As we keep trucking through a very muddy Northeast Iowa, we hit a couple of fields near New Hampton. This farmer really tried as he was aggressive with his planting rate, but it may be a costly decision as we suggest a yield of 169 bushels to the acre in this younger corn field. It is quite unusual for this state to have such a lack of a canopy in the bean fields that you can still see the soil, even in 30 inch rows like we have seen a number of times today. These averaged just over 1000 with our estimates.

We found some long corn ears in Lourdes, Iowa, but they still have a long way to go. At this point the yield calc is 189. Soybeans looked almost identical to our last stop and ended up with almost the same number of pods in a 3 x 3 foot square at 1064.

Our Iowa averages were 181.2 bushels to the acre for corn and 1040 pods in a 3 foot square of soybeans. We hit the southern part of Minnesota next.

Our initial Minnesota stop left a lot to be desired. The corn field was a textbook case of nitrogen deficiency and as far north as we are an early frost will bite it badly. We think this field will produce 167 bushels this fall. The  beans had major disease pressure throughout the field as seen in the pictures below. 728 is the average pod count in a 3 x 3 foot square.

Our final stop of the 2014 Pro Farmer Midwest Crop Tour was near Spring Valley, Minnesota, where the corn was a decent way to end our trek today. We end with a field that will get 185 bushels per acre this fall. The soybeans were a little better than what we’ve seen all day, but not by much, with 816 pods in a 3 x 3 square.

Our Day 4 averages for our leg through Iowa and Minnesota tally up to 180.4 bushels per acre and average pods in a 3 foot square is 995.

The final Iowa results for the entire Pro Farmer Midwest Crop Tour came in with an average corn yield of 178.75 bushels to the acre and an average of 1173.59 soybean pods in a 3 x 3 foot square. 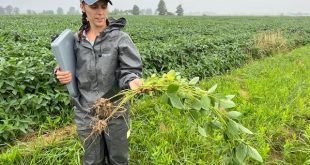