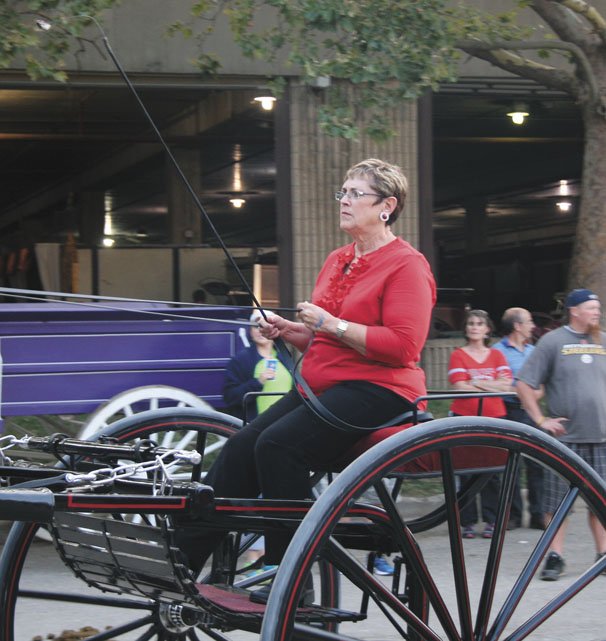 Barbara Watson’s love for the Percheron horse has been the driving force of her ownership of the breed.

For the love of the Percheron horse

Anyone involved with showing livestock knows that it takes a special kind of dedication to attend shows throughout the country and compete at the top level. Showing a large hitch of draft horses may be one of the most daunting challenges in the show ring due to the incredible expense, time, amount of equipment, and harness required.

For Barbara Watson, owner of Eagle Creek Percherons of Montpelier, her involvement in showing Percherons on the national level all comes down to admiration for the Percheron horse.

“If I didn’t love the Percheron horse, I wouldn’t be doing it,” Watson said.

Although she is now heavily involved in breeding and showing Percherons, Watson grew up in Williams County on a livestock and grain farm with a very different horse interest.

“I got a horse when I was in the fourth grade,” Watson said. “She could have been part draft for the way she looked. She was a black and white mare with a stubborn streak a mile wide, but I loved her and she was my horse.”

Watson spent most of the summers of her childhood riding and spending time with the livestock on her parents’ farm.

“In the summers, since I was an only child, I rode the horse all over,” she said. “My childhood was spent with the animals and I loved them. I’ve always been a tomboy, and I’ve always loved being in the outdoors and doing things outside.”

As an adult, Watson became involved with the Arabian horse show circuit.

“We showed them. I drove a little bit in a sulky type cart, but I always rode English (Saddle seat) and Western,” Watson said.

After 25 years of owning and showing Arabians, she was ready for a change.

“I wasn’t happy with what the Arabian show circuit was doing and I was ready for a change,” she said. “It was an interesting transition.”

“Steve Young in southeastern Ohio had a stud colt, and he wanted to sell him,” she said. “He didn’t want a lot for him so I bought him. He was my first Percheron. He wasn’t necessarily what we want to see in the show ring, but he was fun.”

Watson’s passion for the Percheron horse grew as the weanling matured and she added more Percherons to her barn.

“I bought an old hitch gelding,” she said. “He had been hurt behind his poll. You couldn’t check him up tight. We learned on him. It didn’t take long and I had the fever good.”

By 1995, Watson had added two bred Percheron mares to the farm.

In 1999, Watson became a prominent exhibitor on the Percheron show circuit at the national level as she began showing her recently purchased gelding, Art, at shows across the country. During his show career with Watson, he earned the title of Reserve All American Gelding twice.

Through the years and with the support of her husband, Tom, and her three children, Toni, Kelli, and Kara, Watson’s involvement with breeding and showing Percherons has continued to grow.
She breeds a few mares of her own every year and has stood her stallions to the public on a limited level in the past.

“I said I would never stand a stallion,” she said. “Wrong. I like the breeding part of it. From my 100% stallion foal crop this year, I have two stud colts that I’m watching for possible replacements for the stud I currently have.”

The success of her breeding program cannot be denied. The offspring of her horses have earned All American and Reserve All American titles through the years. One of her greatest accomplishments was winning the World Champion title in the Ladies’ Mare Cart Class at the 2010 World Percheron Congress — an event held in the United States just once every four years or so.

2010 was also the first year that Watson exhibited a six-horse hitch.

“We just kind of jumped in,” she said. “At the Congress that year, we were sixth overall out of 18.”

Watson plans to show her mares at the World Congress again this year.

“I’ve entered 11 horses,” she said. “We’ll be showing halter, up to a six horse hitch, and we’ll be entered in the riding classes.”

Not only does Watson hope to breed and show competitive Percherons, but she also wants to maintain the integrity of the breed.

“You have your halter horses and your hitch horses, but we have to have a good Percheron,” she said. “If you lose the width of heel and you lose the depth of bone, you have lost the essence of the Percheron draft horse, and we cannot lose that.

“They want big horses in the hitch ring right now. But they also want action and length of neck. They’ve had a loss of bone in the legs to get the action they want. They’ve bred a bigger horse that’s longer backed.”

Watson believes the longer back has led to more colic and foaling problems. Within her own breeding program, Watson strives to create competitive but less extreme hitch and halter horses with fewer changes from the original Percheron horse.

“If you have a horse that is a good average size for a mare (17.2/17.3) and a little shorter back, they are going to have a longer breeding life and a longer hitch life because they are not as extreme,” she said. “We can’t forget the roots that we came from. Once we lose that, it is going to be awful hard to get it back.”

As trends in the Percheron show arena continue to change, one thing is certain, Watson will continue to show her support for the Percheron breed through her breeding program at home and as an ambassador of the breed at shows throughout the country.

“I’ll do whatever I can to help the breed,” Watson said. “I love the Percherons.”

To read about the driver of Watson’s Percheron hitch, click here. 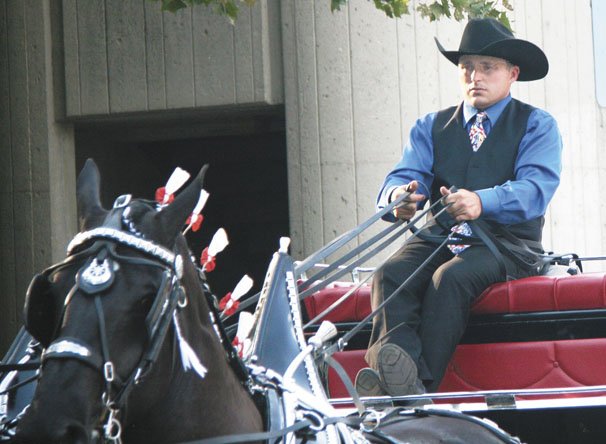