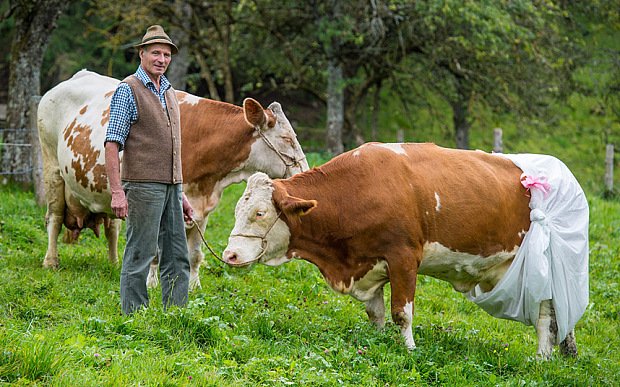 Here in Ohio, we are talking about water quality and nutrient management on the farm on a daily basis. Farmers are making a very conscious effort to better their practices on the farm to tackle an issue that affects the quality of the water that their own families and their neighbors downstream drink. Although the topic is one of importance for the state’s ag industry, it is also a topic that is being addressed in Europe.

Just when you thought you’ve seen it all, a Bavarian farmer has gone to great lengths to prove a point. According to The Telegraph, Bavarian farmers are angry that their famous Alpine dairy cows will apparently have to wear nappies (diapers) under European Union environmental laws.

Johann Huber, whose family has farmed on the mountain slopes of Gmund am Tegernsee for over 400 years, has begun putting home made nappies on his 18 diary cows to avoid falling afoul of an EU fertilizer ban.

Huber said that his cow Doris had behaved well when he fitted her with a homemade bovine nappy to prevent her dropping cow pats on the Alpine slopes.

“We have no standard nappies, they have not been developed commercially yet,” he said.

The Bavarian farm union is protesting against the EU nitrates directive that, they claim, has led to a ban on fertilizers, or the manure left behind by their cows, on any mountain slope with a gradient of more than 15%.

Read more about the EU ban and how the new law is being given a second look (just like some of the diaper-laden cows are) in the full article in The Telegraph.