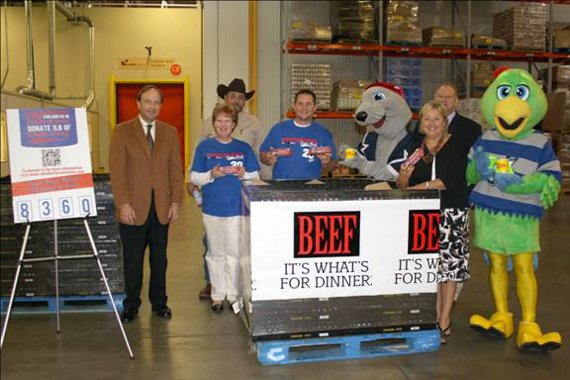 In the classic book, “The Yearling,” a boy befriends a deer fawn that he wants to keep as a pet on his family’s small southern farm. His father is reluctant, but eventually allows it, providing the deer does not hurt the crops. Well, as expected, the deer does significant damage to the crops that are vital for the family’s food supply and winter survival. The deer must go. The upset boy runs away and discovers the powerful pangs of hunger that drive him back home to the farm with a hard and painful lesson learned. Hunger — real hunger, not the “I’ve been working all day and I’m starving” kind of hunger we have all experienced — is crippling and all consuming. There is not much else that matters when you, or your children, are hungry.

Just like the young boy who picked a deer for a pet over the success of the crops, we are a society that takes food for granted. You do not have to search very long before you can find sentiments from well-fed folks out there that make the young boy’s choice in “The Yearling” look well-founded. All too often the politics of food trump the actual realities of this necessity for life. As people protest genetically modified crops in the street, there are people camped out around the corner who regularly have to make tough decisions driven by the real threat of hunger and poor nutrition.

Most everyone reading this will probably be enjoying numerous holiday feasts fit for a king over the coming holiday weeks while there are those in our midst that are hungry — really hungry. This is an astonishing reality for all too many people, including children.

Earlier this fall, the U.S. Department of Agriculture released a report on food insecurity that shows Ohio has not made much progress in recent years. According to the report, 16% of Ohio households reported that there was limited or uncertain ability to provide nutritious meals from 2011 to 2013. This 16% rate of food insecurity is higher than the national average of 14.6%. These numbers translate into the harsh reality of 650,000 Ohio children who are uncertain about the availability of their next meal. That is a tough way to grow up.

According to a new study from Feeding America’s “Hunger in America 2014 report” released by the Ohio Association of Foodbanks in late October, the number of Ohioans seeking assistance from food pantries has increased by 40% in the past four years. More than two million residents can’t afford enough food for their families, or themselves, and are turn to food banks to get the proper nutrients they need.

“The ‘Hunger in Ohio 2014’ study reveals alarming data about the reality that many Ohioans face,” said Lisa Hamler-Fugitt, executive director of the association. “Despite slight improvements to the economy since the Great Recession, hundreds of thousands of Ohioans remain food insecure. What are even more troubling are the coping strategies and spending tradeoffs these Ohio households often make to survive.”

Among the key findings of the Ohio study are:

• In the past year, 81% purchased inexpensive, unhealthy food as a coping strategy

• 66% had to choose between food and medicine or medical care as a spending tradeoff decision made to make ends meet.

Of the 2,007,500 Ohioans served by the emergency food network each year, more than 83% report living in food insecure households, meaning that they were without reliable access to adequate amounts of affordable, nutritious food at some point during the past year. Additionally, 16% of study respondents reported they were responsible for the care of grandchildren in their household.

• 71% of client households are living with annual incomes at or below the federal poverty level. Overall, the study found that the median monthly household income was only $813 ($9,760 annually). One in 10 households reported having no monthly income.

• 50% of households had a member that was employed in the past year.

With these kinds of challenges facing so many, Ohio agriculture, along with providing food for the world, is also working to help provide food for those who need it most.

Ohio pork farmers have been involved in the fight against hunger for years, donating more than 1 million meals of nutritious pork to Ohio foodbanks since 2009. In recent years, the Ohio Beef Council teamed up the Ohio Corn Marketing Program, Ohio Soybean Council, Columbus Clippers, the Mid-Ohio Foodbank and Kroger to provide cases of fresh ground beef to those in need. Ohio egg farmers have contributed millions of eggs for hungry Ohioans through the Ohio Agricultural Clearance Program and individual donations.

The American Dairy Association Mideast is working with The Great American Milk Drive to address the challenge of a lack of access to milk in some homes. Currently, through food banks, families are only getting one gallon per person, per year. The Great American Milk Drive is the first-ever nationwide program to deliver highly milk to hungry families who need it. Since April, the initiative has been making it easy to donate gallons of milk to those in your community via a simple click of a mouse (www.milklife.com/give) or text message (text “Milk” to 27722).

These are just a few of the many examples of Ohio agriculture giving to those who do not have the resources to get the food they need. So, in this season of thankfulness as we enjoy more blessings than can be counted, let us not forget to count agriculture, and the bounty that will provide our next meal, among the most precious.