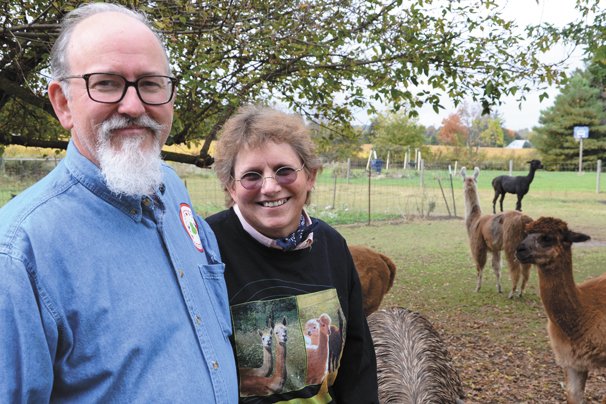 John and Jean McClintock started with alpacas four years ago on their Morrow County farm and have been enjoying it ever since.

Alpacas for fun and fiber

Once reserved for Incan royalty, the luxurious fiber from an alpaca fleece has become widely recognized for its quality and comfort.

The animals are native to South America and were first brought to the United States in 1984. They initially were very high priced and relatively rare, though now they have gained a broader appeal in this country.

“We had been looking at alpacas for a long time and prices are coming down so you can get into it more easily. If you look, you can even find rescue animals now because people can’t afford the hay or feed. There are animals out there in the $20,000-range for alpaca breeding stock, but they have also come down in price, which makes them more accessible for more people,” said John McClintock, who owns Shady Lane Farm in Morrow County with his wife, Jean. “They eat grass and make it into really good fiber.”

After years of searching they found an opportunity to get into the alpaca business.

“There was herd up north we saw on Craig’s List. We went and took a look at them, made an offer and we were in the alpaca business. That has been four years now,” Jean said. “We are still learning the fiber end of it. There are many opportunities to show too, but we are focused on the fiber.”

There are two types of alpacas — the Huacaya and the Suri. The McClintocks have 11 Huacaya alpacas on two acres of pasture.

“The Suri has a long, strong fiber that is preferred for had spinning and Huacaya fiber is fuzzy and better for machine processing,” John said.

Alpaca fiber can be more than 20 different colors. The alpacas are sheared once a year in the spring.

“We have an alpaca shearer come out,” Jean said. “You put the animal in a harness and then you do a blanket cut to trim the belly first. Then we skirt the fleece and clean it up as much as we can.”

The fleeces are taken to Morning Star Fiber Mill in Wayne County that opened in 2005 for custom processing of alpaca fiber and other fibers including llamas and Icelandic sheep. Ohio is a national leader in the production of exotic fibers with many color variations.

The mill offers custom fiber and wool fleece processing capabilities including picking, dehairing, carding, drafting, spinning, plying, felting, and other custom services using modern, small batch equipment. And, if desired, the fiber can be blended with silk, metallics, mohair, or other fibers to produce novelty yarns.

“They weigh it at the mill and they can mix alpaca with angora, mohair, baby camel fiber, or wool,” Jean said. “We usually use a 20% blend or less and 80% alpaca. Mixing fiber adds bounce and other characteristics.”

The result is a high quality, locally produced yarn.

“This is about the fiber. If you knit, weave or spin and you want to know where your fiber came from, there is nothing like have a skein of fiber with an animal’s name on it,” John said. “We sell some of the yarn and Jean makes items out of it on a loom — blankets, rugs, sweaters, hats gloves, scarves. We go to some craft shows like the Autumn Fiber Festival in Ashland, we sell online and we have opened a small shop on the farm.”

Jean really enjoys working with the yarn and turning it into finished products of many hues with the alpaca fiber.

“We dye the yarn here and often use Kool-Aid to color it,” Jean said. “I put yarn in a turkey pan with some water and sprinkle dry Kool-Aid powder on it. I bake it for 45 minutes at 350 degrees. It bakes that color into the fiber. We then use a diluted vinegar solution to set the dye.”

In terms of caring for the animals, the alpacas are fairly easy keepers.

“They are the easiest animals in the world to take care of. They are good-natured. They don’t destroy pens or anything like that. They all poop in the same place. It is a social thing for them — one starts and they all go. Then they are done for a while,” Jean said. “It is the easiest manure management plan. You hire a neighbor boy for 20 bucks to come in the winter.”

The alpacas are fed a corn, oat, and alfalfa mix of 12% protein.

“We’re not trying to fatten them,” John said. “We use a special alpaca blend. We give them just a scoop a day and they always have hay and water.”

They take measures to maximize the quality of the fiber as well.

“We go on a burr hunt and manage burdock in the pastures. Burrs are the worst,” Jean said. “They like 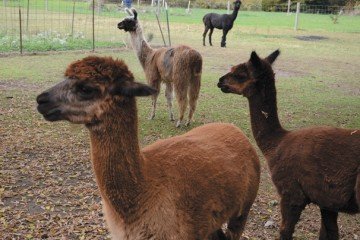 to roll in the dust. I think that helps with flies, but there is a lot of dust in their fiber. That comes out fairly easily, though. They also have a lot of leaves in their fiber this time of year.”

The animals are vaccinated and wormed annually and their hooves need to be trimmed. In addition, their bottom teeth need to be occasionally filed down if they grow too much.

The males need to have their fighting teeth removed.

“You need to cut the fighting teeth out of the males at around two years because they do have aggressive games,” Jean said.

In September, the McClintocks hosted an open house for National Alpaca Days on their farm and had their shop open for the more than 200 visitors who dropped by. Along with a wide array for alpaca socks, sweaters, rugs and other items, Jean also paints gourds and handcrafts jewelry that is sold in the shop. Visitors also enjoyed the chance to see the playful alpacas on the farm, in addition to the emus, turkeys, chickens and guineas on the farm.

The visitors always have many questions about the animals, the fiber and the farm. Among the most common is, “Do the alpacas really spit?”

“They do spit. It is high pressure and they make a noise before they spit so you can hear it coming,” John said. “It stings and is surprisingly foul, but they don’t do it really often and, when they do, you usually do deserve it.” 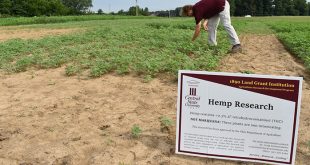