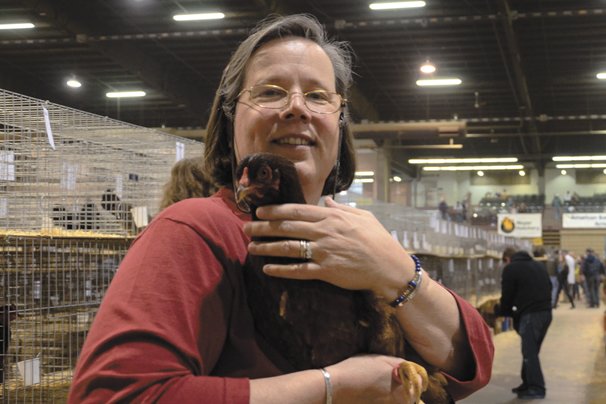 Laura Haggarty, the treasurer for the American Buckeye Poultry Club, loves the all around performance and hardiness of her Buckeye hens.

Heritage breed tied to a bit of Ohio history

Laura Haggarty can remember from childhood her grandfather handing out buckeyes from the tree on his farm to everyone he met. After he passed away, they found a buckeye or two in every one of his pockets.

Years later, Haggarty recalled this fond memory of her grandfather when she first heard about the Buckeye chicken. Ever since then, even though she now resides in northern Kentucky, the Buckeye has been close to her heart.

“I have worked with 17 breeds of chickens and Buckeyes are all I have now. They are just the best all around homestead bird. They are a true dual-purpose bird for eggs and meat and they are hearty. They forage well and eat anything that moves,” said Haggarty, who now serves as the treasurer for the American Buckeye Poultry Club. “When I started with Buckeyes, there were only around 500 birds left and now there are more than 5,000 due to the efforts of the Livestock Conservancy. We have taken these birds from the critical list to where they are just threatened.”

The Buckeye was one of the larger classes at the Ohio National poultry show held in Columbus last month. And, as it’s name would suggest, the breed was established in Ohio.

“The Buckeye is the only breed of chicken developed by a woman. She was a farm wife from Ohio named Nettie Metcalf from Warren,” Haggarty said. “Ohio is still home to many Buckeyes and Buckeye breeders.”

When I took the neglected chickens in hand on the old Ohio farm, because I wanted more spending money, I had not the slightest idea that it was going to lead up to the originating of a new breed and a national reputation no, indeed.

We began housekeeping in 1879 with a flock of pure-bred Brown Leghorns, and didn’t like them a little bit. They were into everything, scratching and destroying more than their necks were worth, laid only in the spring, and hid their nests then in the most out of the way places they could find, and when I wanted to kill one it was “always the wrong time of the year,” according to my husband, for they were always scrawny and in poor condition.

I read a little poultry literature and decided that I would take charge of the hen question, but insisted upon a different breed. Light Brahmas were much lauded about that time, so we secured some fine ones and tried them, but the hawks were very troublesome and seemed to see those white chicks from miles around, so that I didn’t succeed very well with the young: and the old hens set and set all summer long, while what broiler I did manage to raise were slab-sided and gristly, with big bones and little meat.

I very much admired the Black Langshans about that time, so changed to that breed next, and they were certainly fine for the table and better layers than I had had yet — but oh, the black pin-feathers! One season of the Langshan broilers was enough for me, so I tried Barred Rocks, then very new in our part of the country. Those Rocks did very well indeed for me, and my fame as a broiler raiser brought me quite a nice income, but I did work, and sometimes used to think that if I would sell the grain I fed there would be nearly as much clear profit in it, for in those days people expected quite a chunk of chicken for twenty-five cents. Yes, they did, and farmers were fools enough to raise and sell them at that price, too.

I traded eggs with a neighbor who had Buff Cochins, and used the cockerels so raised with my Barred Rock hens and pullets. This produced a big, lazy fowl, so I looked around for something to mix in.

I visited a breeder of B.B. Red Games, who claimed his stock was pure, but I noticed they were not uniform, some of them having yellow and some slate-colored legs, yet so handsome were they that I bought eggs and raised some fine cockerels from them, which I crossed upon my flock of hens.

This year’s mating produced a few red birds, something never seen around there before, and which attracted my attention and aroused an ambition to try and reproduce them. How I was laughed at for the attempt.

Well, reticule and opposition are just the spurs some people need, so determined to “show folks” or die trying. I had no yards or conveniences except one 10 x 12 coop and the run of the 100-acre farm, but whoever heard of a woman stopping for anything, once her mind was made up?…

…My! What a flock I raised that year! No wonder my friends laughed! Green legs and feathered legs, buff chicks, black chicks and even red-and-black barred chicks; single combs and pea combs, and no combs at all, but fighters from way back.

One good neighbor quit laughing and decided to help me out, but her husband “didn’t want any of those Metcalf mongrels on the place.”  She had got a pair of small, gamy ones to begin with, so he brought home a fine, big Barred Rock rooster which he intended using. He put down the big fellow on one side of the high fence while my little red game was on the other, and went in to supper. “Why, Van, they’ll fight,” said his wife, but thought little danger could come to them with that fence between them. “Let them fight,” said Van, “my big rooster will soon knock the spots off that little scamp.”

They didn’t hurry out after tea, and when they did go there was a surprise in store for them. The big Rock lay on the ground with both eyes gouged out, and the little game stood with his foot on the enemy’s head, crowing for all he was worth. “Well I swan,” was all Van could say, but the saucy little game had fought his way into his affections, and he is a breeder of Buckeyes to this day, although the fighting proclivities are a thing of the past.

Many names for my breed suggested themselves, and year after year they bred truer to the type I had in mind, which was a modified Cornish shape, with the very darkest of red plumage, hens containing some black not being objectionable to me so long as the males kept that dark red shade I admired.

I finally decided upon the name Buckeye Reds, and advertised and sold eggs to well-pleased customers. 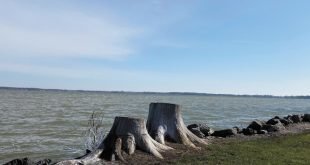 By Mike Ryan, OCJ field reporter Constructed in the early 19th century with the goal …