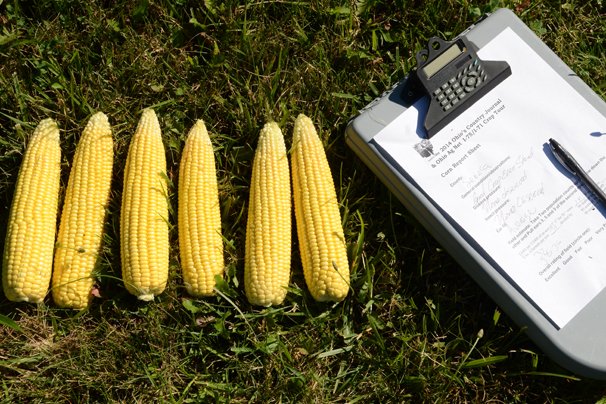 How did the 2014 Ohio Crop Tour estimates stack up to actual yields?

Heading into the 2015 I-75/I-71  Ohio Crop Tour, we thought it may be interesting to take a look at how we fared with our crop estimates on the 2014 I-75/I-71 Ohio Crop Tour. Here is a look at how our late summer estimates compared to the realities in the fields last fall. On the Tour held Aug. 13 and 14 in 2014, two teams crisscrossed the state hitting 42 of Ohio’s top corn and soybean counties doing corn yield checks and soybean crop assessments. The tour offered a huge amount of variability with corn everywhere from mid-pollination to late dent. A corn field and a soybean field were sampled in each county.

After last fall’s harvest, we followed up on four stops from the 2014 Tour to see how the fields actually performed. Here are the results.

The corn yield estimate in Hancock County was 215 bushels. After the yield check on Aug. 13, the field endured a long stretch of hot, dry weather that could have pulled yields back. The actual average yield in the field was 202 bushels. The grower’s other fields to the south yielded significantly higher with more rainfall through the remainder of the growing season.

The Darke County corn yield estimate was one of the lower yields in the 2014 Tour at 150 bushels. On the stop we took note of the deep cracks in the field that had obviously encountered some extended dry conditions that contrasted with many parts of the state that had gotten regular rainfall. As it turned out, we sampled in the worst area of this field and it ultimately averaged 190 bushels, even after the limited rainfall in July and August.

In Madison County, at the Farm Science Review, the corn yield estimate of 195 bushels came pretty close to the 199-bushel actual yield of the field that was sampled. The field did endure some extended dry periods but got some timely and much needed rains.

Crawford County had a 230-bushel corn yield estimate, which was dead on accurate for that part of the field, but the western half of the field had significant water damage. In the end, the field averaged 195 bushels. This example was indicative of the entire farm. There were very high and very low yields and everything ended up right about average.

As of Nov. 10, the average Ohio corn yield from the U.S. Department of Agriculture was 177 bushels. Our combined Tour corn yield average was 186 bushels. The formula used is accurate plus or minus 30 bushels for the areas of the fields sampled.

• On the I-75 leg of the Tour, the Day 1 average was 185 bushels and the Day 2 average was 172 bushels. The average over both days was 178 bushels, one bushel off of the current USDA Ohio average corn yield.

• The Pro Farmer Crop Tour that took place the week after our Tour had Ohio average corn yields at 187 bushels per acre. Pro Farmer said this about Ohio’s crop: “The only thing bad we have to say about the crop is that it’s immature. But if the Ohio crop is nipped by an early frost, the whole Corn Belt is likely in trouble as the state is sheltered by the Great Lakes. The crop is consistently good.”