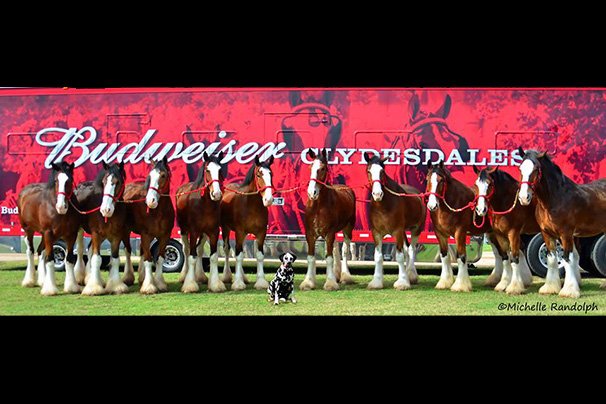 Behind the scenes with the Budweiser Clydesdales

The public regularly sees the members of the Budweiser Clydesdale hitch on display in commercials, at events and in parades, but did you ever wonder what happens when they are between gigs? Despite the fact that they are highly trained and well-behaved horses, they are just horses.

Recently, Michelle Randolph, a professional photographer and friend of ocj.com, was allowed to spend time with one of the Budweiser Clydesdale hitches as they prepared for a parade and also took some time off to relax and play.

Randolph’s time spent with the Budweiser Clydesdales revealed more than the general public is normally able to witness.

“I got to see the Clydes playing around in the arena,” she said. “It was a first for me. Those boys like to play! Watching the boys run and play with each other was so fun. Many people don’t see this aspect of them, and it is so funny to watch!”

Even though there was down time for the horses to relax and enjoy themselves, the hitch and crew also participated in a parade. Randolph was allowed to not only witness the crew’s parade preparations, but she was also allowed to walk with the hitch during the parade.

“The crew is like a well oiled machine when it comes to getting the horses ready,” she said. “It is definitely a must see.”

Additionally, the horses in the hitch behaved professionally as always during the event.

“Giant floating Santas would be enough to send many horses running amuck,” Randolph said. “This hitch handled it pretty good, even when the marching band decided to start playing right next to us. Walking the parade with the Clydesdales in front of thousands of people was so exciting.”

Randolph’s time spent with the Budweiser Clydesdales resulted in numerous fantastic shots, several of which are in the photo gallery below.

Be sure to also take the time to check out the prints and other items Randolph has available on her websites www.michellezphotos.com and http://www.zazzle.com/randolph259. You might just find a few items to add to your Christmas wish list.