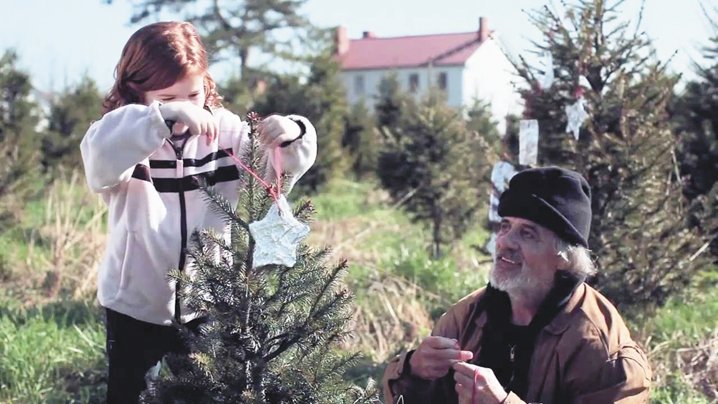 Much of “A Christmas tree miracle” was filmed on the eastern Ohio Feisley farm. This scene from the movie includes the more than 200-year-old barn in the background.

The Feisley family was not looking to have their beautiful Belmont County Christmas tree farm serve as a giant movie set, but it seems that the Christmas magic of the rolling eastern Ohio hills was destined for the silver screen.

Three generations of Feisleys have grown Christmas trees in beautiful Belmont County since the 1950s. Their labor and foresight has made their farm one of the largest Christmas tree operations in Ohio and a beautiful destination for visitors to buy a Christmas tree. Along with the inherent beauty of a scenic and productive farm, Geoff and Theresa Feisley, the second generation of the family to work on the farm growing Christmas trees, restored a 160-year-old farmhouse. In addition, over the course of two years, they also located, dismantled, moved, and reconstructed a 200-year-old barn. The farm with endless rows of hillside Christmas trees and historic structures was the perfect place for a recently released film, “A Christmas tree miracle.”

The behind-the-scenes story for the movie filmed on the Ohio farm got its start in 2011, just before Christmas.

“We were in the middle of one of our busy weekends in December when a customer approached me and told me that besides being a loyal customer of Feisley Tree Farms, she was also a producer of a small film company. She went on to explain that they had a script that had to do with Christmas and asked if we would mind if they did a few shoots here at the farm,” said Theresa Feisley. “Ecstatic would probably be the word I would use to describe how Geoff and I felt. We were so eager to become involved.”

In January of 2012, the film company came to the farm for a visit and really liked what they saw.

“The film company comes for a visit to look every thing over and to give us a plan of how the farm will be used,” she said. “I, of course invited them in, offered them something to drink and proceeded to give them a tour of our 1846 farmhouse. Having not seen the script, I assumed most of the shots would be in the fields or the barnyard. We were walking through the rooms and some of the company started saying things like, ‘We could do this shot over here’ and ‘This room will be perfect for this shot’ and, well you can imagine our surprise. Our house was going to be in the movie! They explained that we would need to redecorate for Christmas.”

The family worked to make the necessary preparations, including putting up a magnificent Christmas tree in the family room. Filming began in March of 2012.

“What an adventure! The cast, the crew, and all the extras were amazing. We had so much fun,” Feisley said. “I had no idea that you could fit that much equipment with actors and cameramen in a room at one time. I will never look at a movie the same way again. It is amazing to me how they shoot the scenes.”

For 17 days, the Feisley family was a part of the movie crew, helping with props, food and anything else needed. Theresa even got to say, “Action” once to start the filming of a scene.

The movie, “A Christmas Tree Miracle,” premiered on Nov. 15, 2013 at the restored Capital Music Hall in Wheeling, West Virginia. It had a U.S. television premier just last month before Thanksgiving on the UP Channel.

“We are so proud to have been asked to be part of this very family oriented movie — something you don’t see very often today,” Feisley said.

Actors in the film include Kevin Sizemore (from “Resurrection”), Terry Kiser (from “Weekend at Bernie’s”) and Jill Whelan (from “The Love Boat”). The movie is a tale of the George family that has grown accustomed to the luxuries of a privileged suburban life and Christmas has become a season of taking rather than giving. With dad preoccupied with work, mom on edge, and self-involved teens Nick and Natalie fixated on their ever-growing wish lists, the youngest, six-year-old Nina, is the only one with any true Christmas spirit.

When their dad loses his job just before the holidays, the family ignores the severity of the situation and continues to live above their means. When the consequences catch up with them, they are left with nothing and nowhere to turn. They are fortunate to be taken in by an eccentric Christmas tree farmer and, in the process, the family learns that miracles can come true.

“The message in it is so relevant to today,” Feisley said. “I can’t tell you how many times people have called me because the message in the movie struck a chord with them about how they are raising children. I just got an email from the United Kingdom the other day from someone who had seen the film and appreciated the message.”

Along with enjoying the final product, the Feisleys really enjoyed the entire filming process as well.

“We made great friends with the film crew and the actors. It was great experience,” Feisley said. “We are taking steps to register our farm to have other films shot here since it was such a great experience.”

“A Christmas tree miracle” is available for purchase at Walmart and on Amazon. Learn more about the film by visiting achristmastreemiracle.com. To see a trailer for the film visit https://www.youtube.com/watch?v=ZUuytdAue_Y or http://www.uptv.com/achristmastreemiracle. The movie airs again on Dec. 12 at 9 p.m. on the UP channel.