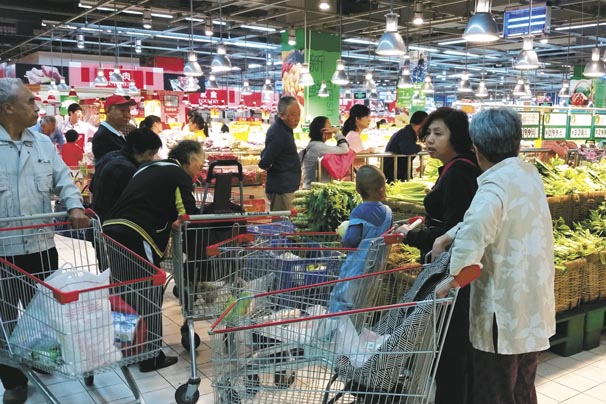 Grocery stores in China are very different from the U.S., but Chinese consumers still want the right to choose their food ingredients. Balancing this, while allowing U.S. farmers to plant what they want in their fields, has proven to be challenging.

Crop biotechnology is widely viewed as a vital component in a future agriculture that can meet exploding global food demand with ever dwindling resources. But, there are very powerful political forces being directed at and employed by end users that are effectively limiting that potential.

“Biotechnology is viewed by our organization as a valuable tool in helping farmers become more productive on the same amount of land. We can’t reach the goals of food production in the future without tools like biotechnology,” said Tadd Nicholson, executive director of the Ohio Corn and Wheat Growers Association. “It solves production problems on farms and then farmers encourage innovation, but that innovation must be done in a responsible way to minimize any disruptions to trade. In the United States we are committed to supporting the advancement of biotechnology. Around the world we need to continue to do work on education and communication through organizations like the U.S. Grains Council. Their projects have proven beneficial in helping others understand the benefits of biotechnology.”

These efforts paid off recently when China approved the Agrisure Viptera trait (Event MIR162) for corn. While the decision certainly makes the seed company happy and is good news for farmers interested in planting the genetically modified corn, this approval could be a signal of broader change with global implications for the future of agriculture. Though frustratingly fickle, China is clearly the dominant force in world crop markets. Could the approval of Viptera be a sign of change for China?

“We would view this as a positive first step towards better trade relations with China. We’re not done completely,” Nicholson said. “There are still a lot of issues with the transparency, accuracy and the timeliness of the Chinese government approving traits. Viptera was approved all over the world before it was approved in China and that is a clue that we still have a lot of work to do. This being approved, though, is very positive because it was causing such a disruption in trade of corn and DDGs over to China. We can’t look to the future and think that we’ve fixed it and work does continue between the U.S. and China to normalize trade between our countries.”

With continued work, Nicholson and the National Corn Growers Association (NCGA) are hopeful that China is moving in the right direction.

“In Japan, for example, their approval process is very transparent and timely and synchronized with the United States. That makes trade with Japan very easy and open and we enjoy that relationship. We want to work towards a relationship like that with China,” Nicholson said. “The European Union has also had long time issues with biotechnology. We have to separate science and politics. Biotechnology is often used as a political barrier. That is part of the negotiations with trade agreements around the world. We would love for the world to focus on the science because we know the science is sound.”

These global issues make a big difference for farms in Ohio. John Linder farms in Morrow County and serves as the chair for the NCGA Trade Policy and Biotechnology Action Team. With margins likely getting slimmer in 2015 and the years beyond, on farm decisions about traits will be increasingly important. Linder feels like farmers should have every tool at their disposal to make the right decisions for the bottom line of their farm.

“We have come off of some really good years and now we are going back to looking at things a little more diligently than we had been. There are a lot of times we don’t really need the traits that are offered. There are times we do, though, and we try to manage our risks the best we can. Farmers, by in large, are conservationists. Why spend money on traits when you don’t need them? But if the trait offers advantages for the environment and our return on investment then we need to have them available. With the decrease in commodity prices that becomes an even higher priority,” Linder said. “When you talk with farmers from other states you can start to see what these traits can really mean. For folks that have to go with corn on corn to pay their land rent that is higher in some parts of the country, these traits can really pay off. On our farm we are planting a little bit of traited corn and some non-traited corn next year because that is what fits best for the farm.”

Though Linder puts a high value on the farmers’ ability to choose the best tools, he also emphasizes a balance with the wishes of the end users of U.S. corn.

“We’d like to think that we get to choose what to put in our planter, but they get to choose what they import into their country. We don’t want to give up our right of choice and they don’t want to give up their right of choice. Those are sovereign rights and how we manage that mutual respect for each other’s needs and desires is the big question,” he said. “We still need to remain really good stewards of what we have to maintain our exports while maintaining the production we need.”

On a global scale, that means being patient with China.

“China is such an unknown. The pure size of China makes it what everybody wants to talk about. It is a huge country and, for soybeans, they are a crucial player for the Midwest farmers. Everyone hopes they become that kind of player for corn and, as U.S. farmers, we’d like to be the suppliers. To have a trait approved makes it seem like there is potential for improvements in their approval process moving forward. Also at the USDA it seems like they are really putting forth efforts to get our domestic approvals through in a more timely fashion. This is encouraging for those who really need the traits,” Linder said. “We’d like to think this is a step in the right direction and that all of the new traits will get through China’s approval system faster, but we’ll have to wait and see. You also realize that there is a lot of press that says China is looking at a social approval system too. If China does their scientific study and still wants to take some social acceptance with this, it could be sitting there with a signature from the scientific standpoint while still waiting on the political approval.”

With more exciting progress of additional traits in the U.S., farmers need to continue to keep watch on the world’s stance on new traits with biotechnology before making planting decisions in their fields that can ultimately have a global impact.

For more, visit the Know Before You Grow tool that provides pertinent information about the global approval of various traits at ohiocorn.org/links/.