Woolly bears and the winter weather

At a recent family gathering one of my uncles asked me about fuzzy caterpillars and their supposed ability to predict the winter weather. He asked because he had noticed a general lack of caterpillars on and around his northwest Ohio farm last fall.

At the time, I admitted my lack of knowledge regarding caterpillar winter lore, but offered to look into it. While I still don’t know what the absence of wooly worms in northwest Ohio last fall will mean for the weeks of winter weather ahead, it was interesting to learn about the lore. Here is what I found out. And — don’t worry — it was all on the Internet, so it must be true.

The caterpillar in question is the woolly bear that anyone who frequents rural Ohio in the fall has surely encountered. It is very fuzzy with black bands at both ends and a reddish, rust colored band in the center. They are commonly seen in the fall and they often curl up in a tight ball when disturbed. The woolly bear turns into the Isabella Tiger Moth after hibernating through the winter and forming a cocoon the following spring.

Various legends about the woolly bear’s meteorological ability have been around for many years based on a number of factors. Here is a nice summary of the legend from the National Weather Service Forecast Office out of La Crosse, Wis.

“As with most folklore, there are two other versions to this story. The first one says that the woolly bear caterpillar’s coat will indicate the upcoming winter’s severity. So, if its coat is very woolly, it will be a cold winter. The final version deals with the woolly bear caterpillar’s direction of travel of the worms. It is said that woolly bears crawling in a southerly direction are trying to escape the cold winter conditions of the north. On the other hand, woolly bears crawling on a northward path would indicate a mild winter.”

The winter weather predicting abilities of the woolly bear have been the source of discussion since colonial times, but got a boost when C.H. Curran, the curator of insects at the American Museum of Natural History in New York, took a more scientific look at the legend in 1948. Curran examined autumn woolly bears in Bear Mountain State Park and applied the theory to make a winter weather prediction. He repeated the experiment for eight years and, with the help of publicity in The New York Herald Tribune, the fuzzy caterpillar was made famous.

Curran’s predictions were said to be 80% accurate, but the effort was mostly just for fun and an excuse to visit a state park in the fall. He admitted his sampling efforts were too limited to really serve as the basis for any kind of scientific findings, but the spirit of his initial task lives on with woolly bear brown-segment counts and winter forecasts at Bear Mountain State Park.

It seems there still continues to be just enough scientific reality to continue to perpetuate the belief that woolly bears predict the winter. Modern entomologists do admit that the weather can influence the critters’ coloring.

“The woolly bear caterpillar’s coloring is based on how long the caterpillar has been feeding, its age, and species. The better the growing season is the bigger it will grow. This results in narrower red-orange bands in its middle. Thus, the width of the banding is an indicator of the current or past season’s growth rather than an indicator of the severity of the upcoming winter. Also, the coloring indicates the age of the woolly bear caterpillar. The caterpillars shed their skins or molt six times before reaching adult size. With each successive molt, their colors change, becoming less black and more reddish. In addition, there are approximately 260 species of tiger moths (the adult of the woolly bear caterpillar) in North America, and each species has slightly different color patterns and hair coverings. As a result, some of the color and hair variations that we see each fall are a result of these different species,” according, again, to the National Weather Service.

Aside from the legends, maybe the most impressive thing about the woolly bear is its ability to survive hibernation even when frozen, thanks to their bodies producing glycerol — natural antifreeze. With actual ability to withstand a freeze and a legendary ability to predict the weather, the woolly bear has earned a spot in our popular culture. The Woolly Bear Festival in Vermillion, Ohio each year is just one of several annual events around the country that pay tribute to this wooly worm.

In the spirit of the woolly bear, here is the official Ohio winter weather forecast from the National Weather Service: Equal chances for above, normal or below normal temperatures and slightly below normal precipitation.

Maybe we are better off asking a woolly bear. 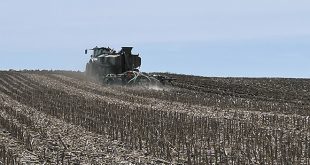 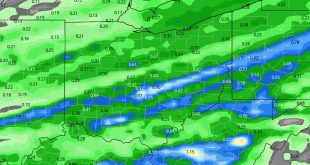 December 1, 2022 -- Sunshine tries to dominate today, but we are still quite chilly over Ohio. Temps will be below normal, but should be a little better off today than yesterday...