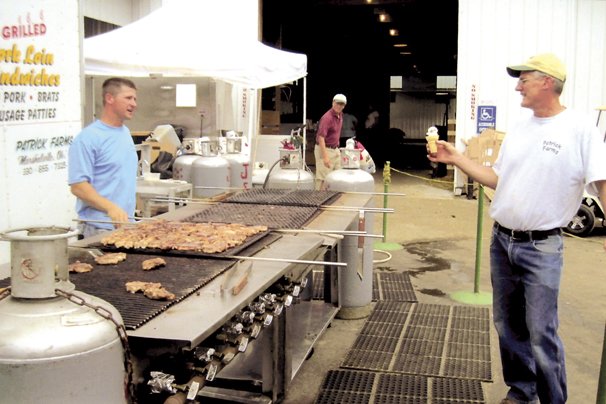 The county fair — there are few better ways to bring people together and showcase the enthusiasm and talent of local community members. Visit the Wayne County Fair in Wooster and it becomes clear that some members of the community have developed a special enthusiasm for the pork industry. Their passion has earned the group’s food stand a prime location and astounding sales numbers at the event.

The group itself has been around for decades, and while they have had a decline in members and do not hold regular meetings, they are certainly having a huge impact in their community and doing a remarkable job at promoting pork.

“The organization use to involve 50 to 100 producers until a lot of hog farmers went out of business in the late ‘90s. It runs a little different now, but we still promote pork,” said Dave Shoup, a member of the Northeast Ohio Pork Producers who currently serves on the Ohio Pork Council and nominated the group for the award.

Under the direction of a few key leaders, the food stand has grown to involve a large part of the community and reach those outside of the agriculture industry.

“Each year, the Ohio Pork Council looks to honor an individual, family, organization or company who excels in promoting pork and the pork industry. Our awards committee felt strongly that, through their 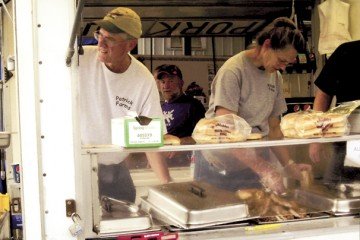 involvement in pork promotions and their efforts to support the local community, the Northeast Ohio Pork Producers were more than deserving of receiving the 2014 Pork Promoter of the Year Award,” said Quinton Keeran, Ohio Pork Council director of communications.

It all began with a small trailer that the group bought in the early ‘80s with the simple goal of promoting pork. Located on the far side of the racetrack, the trailer was managed mostly by the women in the group and served ham and shredded pork sandwiches.

In 1990, when Wayne County pork producer Ross Carmony became the group’s treasurer, things began to change. Carmony recalls being given the checkbook and discovering they had about $40 at the time. Around that same time, he had been shipping hogs to Hatfield Packing. In the winter, when the trucks came to load, they would bring a couple cases of pork loins for Carmony and a fellow farmer each time they came. People started buying them and sometimes they held events where they cut them up to put in sandwiches. The increasing popularity gave him the idea to try some at the pork stand on select days at the county fair.

The following year, the fair board offered them a more prime location near the livestock barns where they had extra space for a tent with a seating area. That year, they ordered 1,500 pounds of pork thinking it would be more than enough, but they came up short.

“We ordered 1,500 pounds of pork the first year and thought we would serve at least 700 pounds. It’s a six day fair and within three days we were out of pork loins,” Carmony said. “I drove up to JH Ruth Packing and got some more and brought down and a few days later, we had sold out again. We did a couple thousand pounds, at most, in ’91. We’ve developed our program a little more since then.”

Through the ‘90s, the stand was a volunteer-based operation staffed by hog farmers and others with close ties to the industry. When the number of pork producers began to decline, as a result of farmers getting out of the hog industry, it became harder to find the necessary volunteers.

“As the pork producers started to disappear in the ‘90s, I started talking to 4-H Clubs and asking if they would work a certain number of hours and we would make a donation to their club. We still had farmers coming in and doing the cooking on these little barbeque grills. It was a lot of different cooks,” Carmony said.

While the volunteers are a critical part of the operation, having many cooks left the group with an inconsistent product for customers. To help with the issue, Carmony approached fellow hog producer, Rich Steiner, about taking on the task of cooking the pork.

For the last several years, Steiner and his family have run all the grilling and food service aspects of the operation for a percentage of the gross revenue brought in. Carmony has remained the lead organizer for the rest, making sure they have the volunteers to market and serve the food, handle the cash registers, and maintain the seating area. The food stand now serves about four and a half tons of pork, and when the operation is in full swing, there are 16 people there to make it run.

“The only reason we do this is to promote pork, so the money side, it all gets given away,” Carmony said.

Any community group that takes a shift receives a donation, from local 4-H Clubs, to church youth groups and sports teams. Money is also donated to the county’s vocational school for their culinary arts program, helping to promote proper cooking of pork to the students and providing pork for a cook off competition.

Each year, a few students who attend The Ohio State University’s Agricultural Technical Institute also benefit from the pork stand in the form of scholarships. The Northeast Ohio Pork Producers typically select three students who are focusing on some aspect of production agriculture and awards them with a two-year scholarship. They have also been known to use some funds for pork producers in the county who may find themselves in a difficult situation.

“We used to run an ad on the radio during the Indians games, but as the cost went up we cut that. Back home is where you have to do the promotions; the biggest promotion we have is right down there at the Wayne County Fair. They get a sandwich they can’t get anywhere else and we hear time and time again this is the best sandwich on the fair,” Carmony said.

Items on sale during the fair include the famous pork loin sandwiches, barbecued pork, shredded pork, sausage, pork sticks — chunks of pork loin stacked on a stick — and potato stacks which top a baked potato with shredded pork, cheddar cheese and sour cream for a hearty meal that is best shared. During the six-day event, the pork stand gets 20% of the crowd, putting the group at the top compared to other sandwich stands.

Volunteers today still include many current and former hog producers, including Myron Ramseyer, who helps Carmony during the event to make sure things run smoothly. He started out as a volunteer grilling pork loins and when Steiner took on all the grilling he transitioned to the front lines where he interacts more with the customers.

“People come around ask us how we cook it because they try to do it at home and can’t. So we explain to them how we do it and usually it’s overcooking. In the last two or three years, the USDA has lowered the temperature you need to achieve for properly cooking pork to 145 degrees,” Ramseyer said. “That’s probably our main goal: to help people understand how to prepare pork, but we are there discussing animal welfare as well.”

In addition to the food items, the stand also has a variety of literature on hand and promotional pork items such as pens, recipes, coffee mugs and anything that makes consumers “think pork.” There is also a model of a finishing barn on display to help explain swine production and inform consumers as to how it is raised. 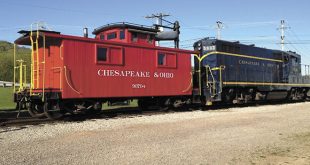 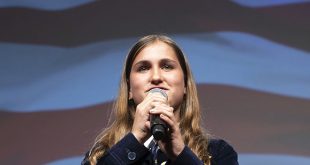