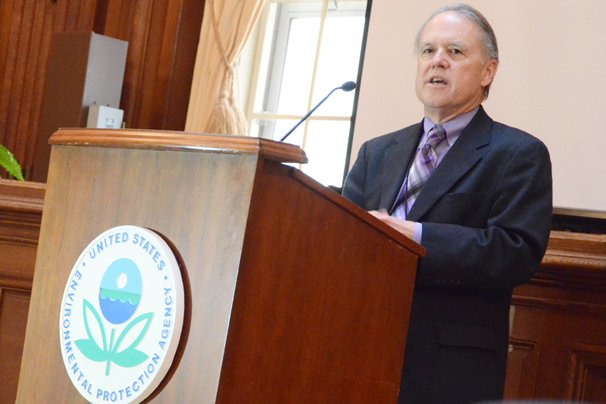 Ron Carleton, EPA’s council to the Administrator for agricultural policy

A water rule by a different name

A rule that was once called WOTUS,

Crafted by an Agency of POTUS,

Does it sound much more cool as the Clean Water Rule?

Has the EPA gone and snowed us?

Now everything’s all in a muddle

Ag and the EPA in a scuffle,

‘Cause the water rule’s a dud, ‘bout as clear as mud,

Who’d have thunk tryin’ to govern a puddle?

You can take a donkey and call it a horse,

And some fool will believe you of course,

But let’s not be fooled by this Clean Water Rule,

And let them pass this ass for a horse.

First, let me say that my recent trip to Washington, D.C. reaffirmed my general belief that most people who work for the government do so because they truly want to help. I think that holds true for the folks at the oft-criticized Environmental Protection Agency as well. They just want to help and do what they think is right, generally speaking. Though in the case of the agency’s current attempts to dramatically expand federal oversight of water, the help they are offering does not seem to be wanted.

When people spoke out about the Waters of the U.S. (WOTUS) rule, the EPA decided to try and “help” under a different name. In March, EPA Administrator Gina McCarthy told the National Farmers Union at its convention that she was renaming the much-maligned WOTUS, changing the name to the “Clean Water Rule.” She said she wished EPA would have done a better job of rolling out the rule by being clearer about what EPA was and was not proposing and by talking to farmers and others before putting out the interpretive rule.

McCarthy said the definition of tributaries will be narrowed, concern about erosional features will be fixed, and the only ditches EPA is interested in are natural or constructed streams that have to have the amount, duration and frequency of flow to look, act and function like a tributary. She also said the exclusions and exemptions for agriculture in the Clean Water Act absolutely won’t change.

Yet, concerns with the rule remain. Critics of the rule contend that it is duplicative and overreaching. Currently the EPA’s jurisdiction includes “navigable” waters and waters with a significant hydrologic connection to navigable waters. The new rule would broaden that to include, among other water bodies, upstream waters and intermittent and ephemeral streams such as the kind farmers use for drainage and irrigation. It also would encompass lands adjacent to such waters.

According to analyses by the National Pork Producers Council, other agricultural organizations and federal agencies, the rule could encompass millions of miles of streams and adjacent lands, subjecting any activity near or on them — including the application of fertilizers and pesticides and potentially even planting crops — to permitting. The regulation could also expose farmers to lawsuits, alleging, for example, that ditches on cropland should be regulated under the Clean Water Act.

“Let me be very clear — everyone wants clean water,” said Jeff Metz, president of the Nebraska Farm Bureau in testimony before the U.S. Senate Agriculture Committee. “However, this proposed rule isn’t about clean water. This rule is clearly focused on expanding the role of federal regulatory agencies into the daily lives of people around the country.”

At the heart of the concern is the expansion of the definition of what could be regulated by the EPA.

“I have seasonal draws, valleys and canyons as well as ponds and other natural depressions on my land that will at times fill or flow with water during precipitation events. Many rarely, if ever, have flow that reaches a flowing stream,” Metz said. “This rule could require that I obtain a federal permit in order to plow, apply crop protection products, graze cattle or even build a fence in or around these areas.”

EPA officials deny that this is the intent, but Metz noted that adding another layer of red tape to agriculture would do little to protect the environment, but cost him time and money, and in a worst-case scenario, prevent him from using his own land.

“The federal government is under no obligation to even give me a permit,” Metz said. “This rule would create uncertainty and expand liability exposure for Nebraska farmers, despite the fact we have a state agency that has been responsible for protecting these waters for nearly 40 years.”

Despite a flood of comments from stakeholders, opposition from numerous states, and objections from both parties in Congress, the EPA continues to charge ahead with the rule. Republican congressman Bob Gibbs grilled EPA officials in a hearing, even asking if the EPA had hired a public relations firm to help them make the old WOTUS rule sound more appealing and if they had paid any attention to the many comments on the rule that were seemingly being ignored.

Yet, with all the hubbub, the EPA progress on the newly coined Clean Water Rule continues. Ron Carleton, EPA’s council to the Administrator for agricultural policy, updated the Ohio Farm Bureau on their recent trip to Washington and had this to say about the rule.

“There has been some interest in making a number of revisions to this. The Administrator feels at this point in the process that she has heard the comments from folks all across the country and she feels that the science is out there now. She is ready to go ahead and move forward with the final rule. That is where we are. We expect that the rule will be sent over to the Office of Management and Budget for further review. Assuming that process proceeds at the expected rate, the rule will come down a little bit later on,” Carleton said. “One of the questions I get on this is, ‘Why are you even doing this rule?’ I think the current process is pretty uncertain and pretty unclear and the Supreme Court said as much with a couple of the decisions on the Clean Water Act. People have asked for some rules that are clearer and more certain for the agricultural industry so you know what is jurisdictional and what is not. We heard from Congress and agricultural stakeholders that the current process was too uncertain. There is not clear guidance because one district was different from the decisions and determinations in another district. The Administrator felt that was untenable as well.”

Carleton said the new rule targets water quality improvement resources where they will have the greatest environmental impact.

“Hopefully this will provide more clarity. We need to determine what is jurisdictional and what is not, but that is only part of the process. Those statutory and regulatory exemptions that have been in place for agriculture will still be there. So, there will be many instances where you may have a jurisdictional water near you but because you are engaging in normal farming and ranching activities, those activities are exempt so you won’t need a permit,” Carleton said. “Hopefully this will be done later this spring or early this summer and we’ll see where things go from there. The administrator has been very determined to make sure these exemptions are there and that agriculture is not affected that much by these jurisdictional determinations.”

Carleton went on to reaffirm that the EPA wants to work with all stakeholders to address the nutrient problems in the waters of the U.S.

“We need to move forward in that voluntary collaborative kind of way. We want to continue to let agriculture do what agriculture does best,” he said. “But those issues are out there and when things happen, people come to us and they want us to do something. Bringing in a hammer is not what we want to do. We think we can resolve these things by working together.”

It seems, though, that the EPA plans to work together with the same stakeholders they are currently ignoring. See what I mean — just trying to help.

By Matt Hutcheson, CCA, Product Manager, Seed Consultants, Inc.  Planting is one of the most …